We must have missed that one. Maybe it was slipped in late yesterday around the time the president was publishing the names and employers of 44 San Antonio residents who donated the federal maximum to one or another Democratic candidate. Oh, wait. That wasn’t Donald Trump. It was Texas Rep. Joaquin Castro, a Democrat, and the 44 people he outed — and conceivably placed at risk — were Trump donors.

So what prompted MSNBC host Nicolle Wallace to even suggest that the president is “talking about exterminating Latinos”? She makes the outlandish claim in the video that follows (beginning at 0:22):

This is a complete lie and is extremely dangerous rhetoric in today’s volatile atmosphere pic.twitter.com/S5Yda6MUQR

Possibly it is a reference to an exchange at a rally in Florida in May, unearthed this past weekend by The Washington Post. The Post’s JM Rieger writes:

Three months before one of the deadliest public mass shootings in U.S. history, allegedly driven in part by white nationalism, President Trump asked a Florida audience how to stop migrants from crossing into the United States.

“How do you stop these people? You can’t, there’s —” Trump said, cutting himself off as a rally attendee yelled back, “Shoot them.”

Trump paused and smirked, before responding, “That’s only in the Panhandle can you get away with that statement.” The crowd cheered for nearly 10 seconds before Trump continued.

Notice that the president’s joke, which one might argue he should have avoided making, was in no way an endorsement of the unserious recommendation or even an acknowledgement of it. Instead, he was taking a dig at the Florida Panhandle.

From that exchange, Wallace leaped to the assertion that Trump is now embracing the mass execution of Latinos.

It is worth noting that this off-the-wall accusation comes on the heels of a former CNN employee tweeting in reaction to a statement by presidential adviser Kellyanne Conway calling for unity, “You are ‘the depraved evil’ we need to eradicate“ [Emphasis added].

The Left loves to lecture on the dangers of incendiary rhetoric. Maybe they should practice avoiding it themselves.

*UPDATE* Shortly after her show aired on Monday, Wallace apologized for her outrageous claim … sort of. She tweeted this:

I misspoke about Trump calling for an extermination of Latinos. My mistake was unintentional and I’m sorry. Trump’s constant assault on people of color and his use of the word “invasion” to describe the flow of immigrants is intentional and constant.

So, the president didn’t say what millions of viewers may have heard her say he said. But it doesn’t make any difference because he’s still a terrible person in her view. 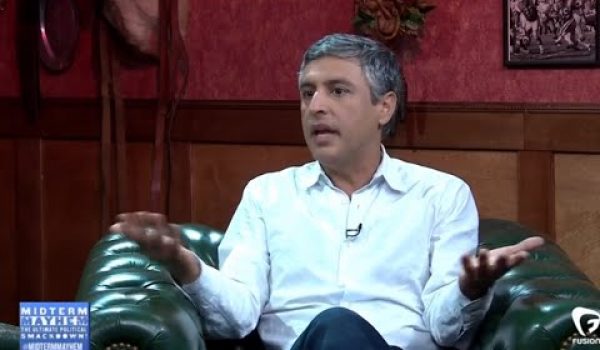