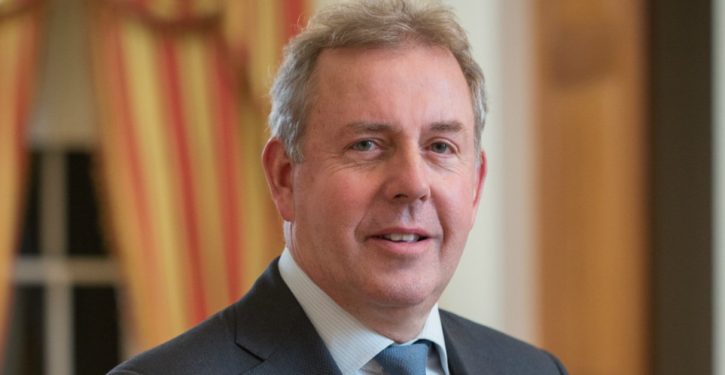 The case of the leaky UK ambassador, Sir Kim Darroch, got a little stranger in the last few days.  Ambassador Darroch was forced to resign after cables were leaked in which he described Donald Trump as “clumsy” and “inept,” and accused his administration of “diplomatic vandalism” for restoring U.S. sanctions suspended by Obama under the Joint Comprehensive Plan of Action (JCPOA) on Iran.

There were other pejorative characterizations in Darroch’s cables to the UK Foreign Office.  But you get the picture.  Trump had an interestingly strong reaction, tweeting angry words about Darroch and stating that the U.S. would no longer be able to work with him.  Darroch is on the way out, as is usual when such a row arises.  Nations rarely leave ambassadors in place who can no longer function in their roles — regardless of the right or wrongs of the situation.

….thought of within the U.S. We will no longer deal with him. The good news for the wonderful United Kingdom is that they will soon have a new Prime Minister. While I thoroughly enjoyed the magnificent State Visit last month, it was the Queen who I was most impressed with!

But as the headline allusion to Christopher Steele suggests, there may be more to this story.  At the least, it’s a little group of data points to add to the Spygate file.

As to the data points, there are three noteworthy ones.  First is the report from Sara A. Carter that Kim Darroch assured a U.S. official that Christopher Steele was “absolutely legit.”  The context of this emphatic assurance appears to have been the shopping of the Steele dossier in Washington in 2016, and the top guess about which department the U.S. official came from would be State.  The Justice Department had used Steele as a source for years by then, and didn’t need to touch base with the British ambassador about his credibility.

The timeframe would presumably have been sometime between July and October 2016, given when Steele and Fusion GPS were ringing doorbells around the District with the dossier’s contents — and in particular, when Steele was serving as a source of freelance “intelligence” for the State Department, submitting reports through Spygate bit-player Jonathan Winer.  Getting Steele vouched for may have immediately preceded (or followed) his meeting about the dossier with DOS official Kathleen Kavalec in October 2016, which yielded notations about factual discrepancies in the dossier’s reporting.

We don’t know the exact circumstances in which the assurance was given by Darroch.  But it’s not routine for an ambassador to vouch so categorically for a random citizen plying his trade abroad, especially when the trade has to do with intelligence and foreign affairs.  If Darroch gave such an emphatic assurance, probably in response to a query from State, that means there was someone with horsepower in the UK who wanted Steele to have an entree.

Darroch in fact probably runs in the same circles as that horsepowered person or entity.  His foreign service biography runs something of a cursus honorum in the realm of diplomacy and national security, including a stint as national security adviser to David Cameron, and extensive background as a UK representative in EU organizations.  The names that have come up in Steele’s background of backers — Dearlove, Sawers, etc. — are in Darroch’s too.

Which is interesting context for the other two data points.  One is from Tom Rogan’s report at the Washington Examiner on 15 July, that Darroch is said by U.S. officials to have made a habit of leaking tightly controlled U.S. intelligence.  Says Rogan:

According to one current and one former U.S. government official speaking on the condition of anonymity, Darroch repeatedly leaked classified U.S. intelligence information, including highly classified information, to a journalist for a U.S.-based media outlet. The sources are confirmed by the reaction my related inquiries have received from other government officials.

Rogan continues with a hint of the seriousness of the matter: “[O]ne source says that the U.S. government was so alarmed by Darroch’s leaks that it launched an official investigation to find the source of the information.”

The officials stressed that this pattern wasn’t detected through surveillance by a U.S. government agency.  In other words, the U.S. didn’t spy on the UK ambassador to uncover this information about his alleged activities.  Take that as you will; Rogan says he was told that “non-U.S. government derived records showed the ambassador and journalist exchanging messages on a continuing basis.”

This may put Trump’s cutting tweets in some perspective. In the words of Judge Chamberlain Haller (Fred Gwynne) about Mona Lisa Vito (Marisa Tomei) being “Cousin Vinny” Gambini’s fiancee, “That would certainly explain the hostility.” (My Cousin Vinny, 1992; 20th Century Fox/Jonathan Lynn)

Naturally, we would want to know the media outlet and the journalist in this cozy relationship.  They aren’t named.

But the second data point raises at least one other obvious follow-up question: when exactly was Darroch appointed to his post?  It was in January 2016.  Spygate observers know that to be a fascinating time in the saga: the earliest point at which John Brennan was reported to have formed a task force to look into alleged Russian activities involving Trump and the election, and the period when George Papadopoulos was working his move from the Ben Carson campaign to Trump’s, and New York GOP chairman Ed Cox was recommending Carter Page to the Trump campaign.

Which in turn ushers in nicely the third data point.  This one comes from AP journalist Julie Pace, and undoubtedly was meant to convey at face value the headline point that Darroch was thought of in D.C. as a “bridge-builder.”

Try it on for size:

Although much of Washington expected Trump to lose to Hillary Clinton in the 2016 election, Darroch spent that summer and fall building relationships with the billionaire businessman’s friends and advisers. He mingled on the floor of the Republican convention in Cleveland and got to know Trump’s political advisers and longtime friends, including Newt Gingrich, the former House speaker, and Michael Cohen, Trump’s longtime lawyer and fixer who is now in jail for campaign finance violations tied to hush money payments he made on Trump’s behalf.

It sounds a bit different now, in the context of the other information being reported.  In fact, it’s curious that Darroch would devote a noticeable amount of time to cultivating Michael Cohen, who in spite of his roles with Trump was so obviously never a heavyweight political player.  Nor was there reason for a savvy government official with years of bureaucratic maneuvering under his belt to imagine that Cohen would ever have an inside track to Trump’s close circle of political power.  Whatever reason there might be to buddy up to Cohen in regard to Trump’s personal life (and there wasn’t actually that much), Cohen wasn’t the guy, national-interests-of-the-UK-wise.

Ambassadors in the world’s top posts — and the UK’s man or woman in Washington, D.C. is one of them — are extremely busy people.  In official settings, they don’t jaw around with peripheral personalities for the joy of good fellowship.  Put Ambassador Sir Kim Darroch down as another actor in the Spygate drama with a passion for Michael Cohen’s society — alongside aspiring nuke plant proprietor Franklin L. Haney and the cast of Qatari magnates who popped out of nowhere in 2018 to wine and dine Cohen in relation to that bizarre project — that can’t be explained by known facts or common sense.

Library rejected ‘drag queen story hour’ … so Atlanta mayor held it at city hall
Next Post
Squad to Pelosi: We are women of color — and don’t you forget it!