Donald Trump, Jr. was attacked as racist for retweeting a tweet posted by a friend of mine, Ali Alexander, who is black. But four months ago, on CNN’s Don Lemon said the same thing as Ali but wasn’t attacked by the hypocritical liberal mob.

Ali’s tweet displayed his dismay that Kamala Harris was claiming she was African American or “American Black.”

Kamala Harris is *not* an American Black. She is half Indian and half Jamaican.

I'm so sick of people robbing American Blacks (like myself) of our history. It's disgusting. Now using it for debate time at #DemDebate2?

These are my people not her people.

Ali is neither a conservative provocateur nor alt-Right as he has been described in the liberal media. He’s one of the most reasonable conservatives I’ve met. Ali has faced much racism in his life because of his African-American and Arab background, and his sincere belief was that Harris had no right to the common terms used for black Americans because her background didn’t include the horrible part of the African-American experience such as slavery or Jim Crow.

Trump Jr. retweeted Ali’s tweet merely for the purpose of asking if it was true. Of course, being Donald Trump’s son he was attacked as racist. The Daily Beast accused him of both racism and birtherism:

That’s when she was attacked on Twitter by a conservative provocateur for not being an “American black.” It’s a play straight out of the racist birther playbook used against Barack Obama when he ran for president a decade earlier. This time, though, those kinds of allegations don’t have to circulate for years on obscure right-wing forums before they reach a mainstream audience

The Daily Beast is wrong not only for calling Ali a provocateur but for overlooking the fact that birther movement was initiated and spread by Hillary Clinton’s campaign, particularly her buddy Sidney Blumenthal.

Alexander explained his tweet to the Daily Beast, which posted only part of his statement. His full rational was: 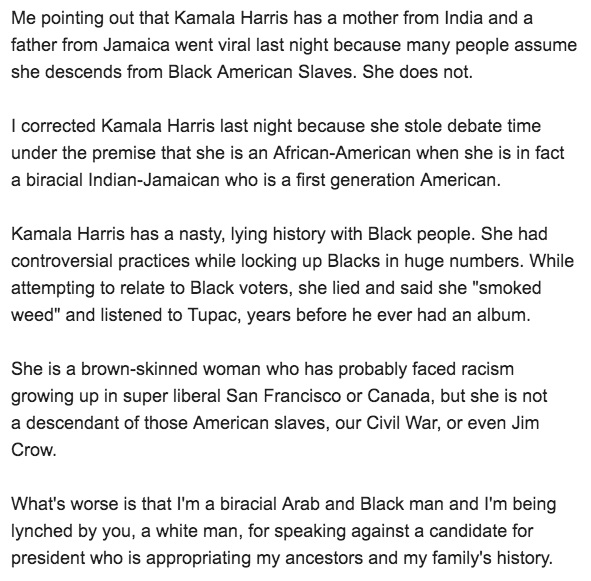 The Daily Beast also conveniently overlooks the time in February when Don Lemon made the same comment about Harris’s race on air, but perhaps that’s because on liberal firestorm started.

As reported by the Atlanta Black Star, on the February 13 episode of “CNN Tonight,” Lemon shouted down April Ryan during a discussion about Kamala Harris’s “blackness.”

Cutting in, Lemon contended the issue was never about Harris being “Black enough,” but was more so about whether she shares the experience of American descendants of slaves, also known as “ADOS.”

“No, no, no, no. I don’t think you hear what people are saying,” he told Ryan. “To want the distinction to say is she African-American, or is she Black or is she … whatever — there is nothing wrong with that. There is a difference between being African-American and being Black.”

Lemon argued that all Harris had to say is that she is Black, not African-American.

“So she could indeed be African-American mixed with others, but she is a Black woman,” she said.

“Jamaica is not America,” Lemon said, interrupting her again. “Jamaica did not come out of Jim Crow. I’m just saying.”

“She was born here in America!” Ryan shot back. “So, let’s talk about [Sen.] Ted Cruz. Ted Cruz was born in Canada and his father —”

“This isn’t about Ted Cruz,” Lemon butted in once more, accusing his guest of changing the subject.

“It’s hypocrisy! I’m not changing the subject!” a flustered Ryan shouted. “I don’t know what you want from me.”

The two continued yelling over one another before another panelist chimed in.

Lemon eventually drove home his point, making sure to emphasize the difference between the historical experiences African-Americans and Black people who have immigrated to the United States.

“You’re missing the point,” he told Ryan. “People are asking [Harris] if you are African-American if you are someone who came out of Jim Crow, out of American slavery. Are you [a] descendant out of that? That’s all I’m saying.”

Here’s the video of the debate: 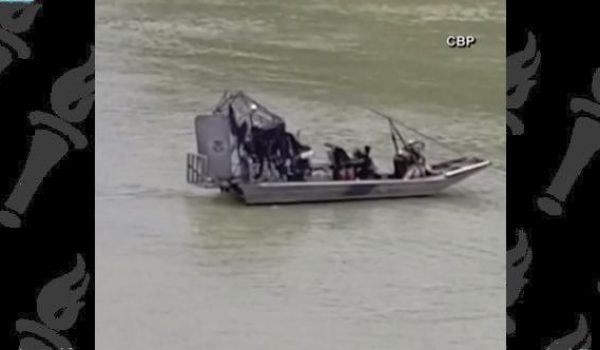 If Trump is to blame for drowning migrant father and child, does he get credit for the many rescues made on his watch?
Next Post
Cartoon of the Day: Merry Marxists