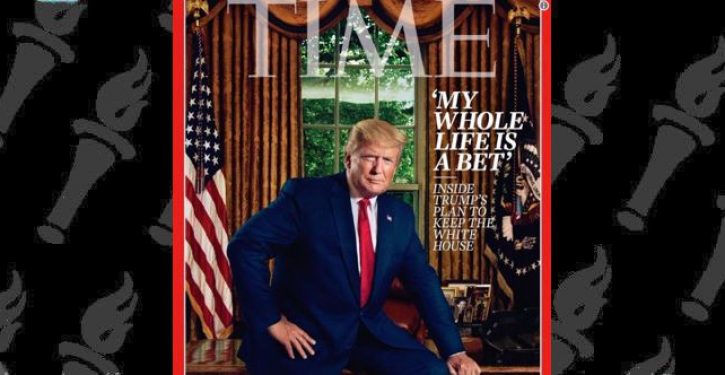 Days after Donald Trump trolled the Left by riffing on a Time magazine cover from 2018 that one exercised liberal wrote depicted him “threatening to be president for eternity,” the new issue of Time is out and, as luck would have it, Trump is on the cover again. This time, however, the Left is incensed for an entirely different reason.

Take a look at the cover, which follows, and see if you can isolate the reason for their angst:

If you failed to find it, I will give you the hint that you should be looking for what the picture doesn’t show.

Give up? The cover photograph doesn’t portray Trump in a negative light. Unlike the cover of the August 23, 2018 issue (below), which showed the president (and his presidency) taking on water — literally — this most recent photo is rather flattering: presidential, one might say.

Among those disappointed that Time’s production department couldn’t at least show the president with his hair on fire was MSNBC’s Howard Fineman, who tweeted out:

As a reporter/writer who spent 30 years at the (great) old Newsweek, and who admired ⁦@TIME⁩, I’ve gotta say that this image is an outrage. I know that Henry Luce worshipped the Great Man Theory, but when he put a dictator on the cover, he didn’t visually kiss his ass. pic.twitter.com/SOL1EftnG5

Fineman wasn’t finished. He then resorted to the typical leftist playbook and compared the president to Hitler.

Apparently, Fineman is of the opinion that everyone with whom he disagrees is Hitler, an opinion one would expect from an uneducated prepubescent who does nothing all day but watch certain networks while snorting condoms, not a so-called “trained journalist.”

Then again, he does work for MSNBC, so it all sort of makes some perverse sense.