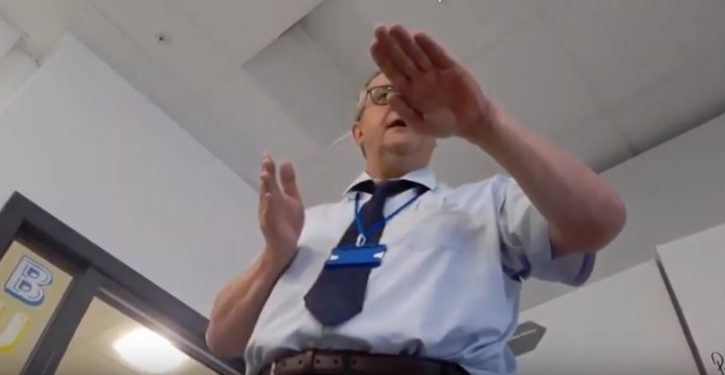 Ah, school days — those innocent days of youth. On second thought, make that “mostly innocent.” Kids who fought a lot or were found cheating faced suspension. So did children who acted up in class.

Students were never suspended for refusing to accept the politically correct notion that there are more than two genders, but times have changed. The Evening Standard reports:

A teenager who said he was thrown out of class for insisting there are only two genders has reportedly been suspended from school.

The unidentified schoolboy secretly filmed the moment he was reprimanded by a teacher at a school in Aberdeenshire, who said the view was not in line with school policy.

A friend of the boy told the paper he filmed the teacher “because he wanted to show what was going on in schools today for simply stating there are only two genders”.

In the video, which follows, the teacher is clearly frustrated, telling the student he is “choosing to make an issue of this” while simultaneously insisting that belief in the existence of mulitple genders is accepted “school policy.”

The teen, who began recording the exchange after the teacher ejected him from the classroom, can be heard arguing that “scientifically there are only two genders. This new gender theory that there are unlimited genders is something that should be discussed and debated.” The teacher counters by insisting that “saying ‘there’s no such thing other than male or female’ is ‘not inclusive.'”

When the teacher adds, “You’re entitled to your opinion,” the student responds, “If I am, then why did you kick me out of class? It’s not very inclusive.”

In other words, it’s their way or the highway. No wonder so many schools are failing nowadays.