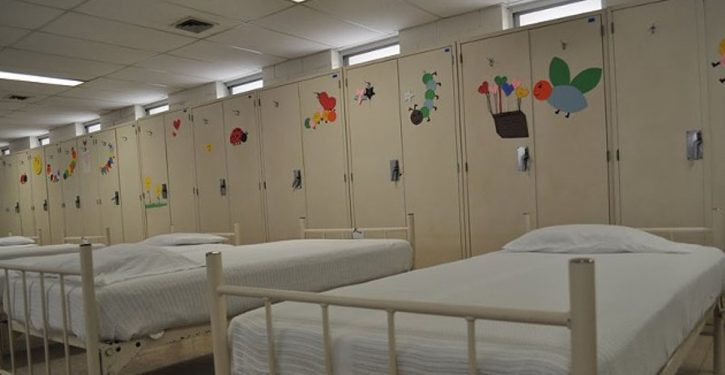 Ben Bowles wrote on Tuesday about Alexandria Ocasio-Cortez’s inappropriate, indeed offensive, invocation of the Holocaust as an analogy for the detention facilities used to house the illegal migrants flooding the U.S. southern border.

Make no mistake, as the old POTUS-in-Chief used to say.  When you use the expression “Never again,” you’re invoking the Holocaust.  It doesn’t matter what else you you meant by “concentration camp.” Stalin, after all, was a master of the concentration camp, and the Nazis learned much of their technique from his zealous squads of experts in harsh, brutalizing internment.

Whether you see concentration camps as “death camps” depends in large part on whether you ever had to be in a Stalinesque concentration camp, where death stalked the very air people breathed, even if it was a slow, torturous hunt with an outcome not entirely certain.  But because it’s of overriding importance to acknowledge the intent of actual death camps, which go hand-in-hand with “Never again,” let us distinguish between them.

Now a CNN contributor has gone Ocasio-Cortez one better, flat out saying that the endstate is death camps — e.g., Auschwitz — for the U.S. detention effort with migrants.  (Which, remember, is exactly the same detention effort undertaken by the Obama administration.)

Death camps would be the ones with gas chambers and ovens.

It hardly needs saying that this is utterly deranged.  But let’s consider just three things that put Angela Rye’s psychotic rant in perspective.

One is that what U.S. law is attempting to bring about is adjudication of asylum requests.  And under current practice, constrained by a court ruling from 20 years ago and congressional arrangements since then, what usually happens is that detainees are released on their own recognizance long before their cases even come before the judge.

You will search the annals of the Holocaust in vain for these features in relation to death camps.  The intent of death camps was to deal out death. And they were very successful at it.

A second thing to consider is that people had to be rounded up at gunpoint and forcibly transported to death camps.  In fact, it was a priority in foreign countries invaded by the Nazis hundreds of miles from Germany to round up Jews and shuttle them off to death camps.  Women, children, old people — the very point was to kill them, the bearers of legacy, civilization, heritage, and not just the fighting-age men.

People were terrified of death camps. They didn’t want to go to death camps. If they had the means to do it, they did whatever they could to avoid death camps.

Whereas thousands and thousands of people from Central America are trying to enter the U.S. every month now so they can turn themselves in to the authorities and go do their time in detention as part of lodging an asylum request.  Migrants are paying money for the privilege of rushing toward American detention facilities.

No one pays money to enter a foreign country illegally in order to seek out a death camp.

The third thing comes from Ocasio-Cortez’s tweet with an image of a migrant detention facility, which she brandishes as if it shows migrants being mistreated.

This administration has established concentration camps on the southern border of the United States for immigrants, where they are being brutalized with dehumanizing conditions and dying.

This is not hyperbole. It is the conclusion of expert analysis ⬇️https://t.co/2dWHxb7UuL

What it shows is migrants living in the same tents that are set up for U.S. troops forward deployed in places like Kuwait, Iraq, and Qatar.  They aren’t luxurious, but they’re quite habitable and compare favorably to the arrangements for migrants anywhere else in the world.  Unlike Ocasio-Cortez, I’ve actually spent time in these tents.  They have heating, air-conditioning, comfortable beds and linens, storage units for belongings.  Another thing they compare favorably to is multi-man berthing on a warship.  The bathroom facilities (often in double-wides referred to humorously as “Cadillacs”) are particularly preferable in that regard.

They’re meant for temporary habitation. And that’s the use they are put to for migrant detention.

Not to put too fine a point on it, you really have to be an idiot to think this is cruel and unusual.  But, all that said, it may be a good thing that Ms. Ocasio-Cortez, Ms. Rye, and others are exposing their hyperventilating, performative ignorance so clearly and sparking public debate on these matters.  There’s obviously a crying need for education on this.  There’s more than one way to ensure people really understand what the Holocaust was.  Teaching moments come in different guises, not always heralded as we might prefer with good faith or honest curiosity.