That was quick. Alexandria Ocasio-Cortez, who has been in Congress a little over five months and is receiving an annual salary of $174,000, plus perks, is ready for a raise. Actually, to listen to her,  the $4,500 increase she seeks is “not even like a raise” really. It’s a cost of living adjustment, and everyone, from minimum wage workers on up, needs and deserves one. “Congress, retail workers, everybody should get increases to accommodate for changes in our economy,” she says in the video that follows:

Ocasio-Cortez, who makes $174,000, says she needs a raise like minimum wage workers: “Congress, retail workers, everybody should get cost of living increases to accommodate for changes in our economy”

Did you notice her mention of dark money loopholes, which members of Congress will feel pressured to keep open if they are not given a raise? Do you get the sense she is telegraphing her own future plans in the event she doesn’t get her COLA? Bear in mind that she has already attempted to game the system by operating a “subsidy scheme” with her campaign manager that ran afoul of campaign finance laws. She was also alleged to have set up a million-dollar private slush fund with her chief of staff.

Omar says detaining illegal aliens is ‘un-American,’ but can she name a country that doesn’t?
Next Post
Cartoon of the Day: Inconvenient glacier 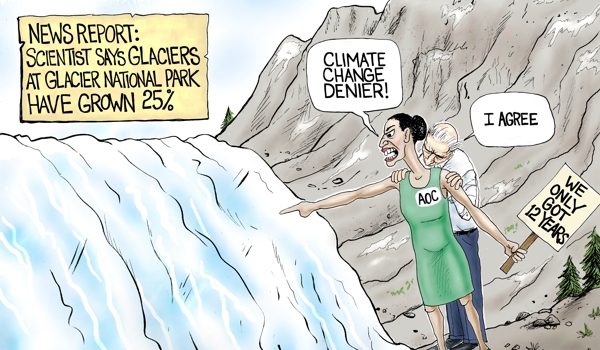