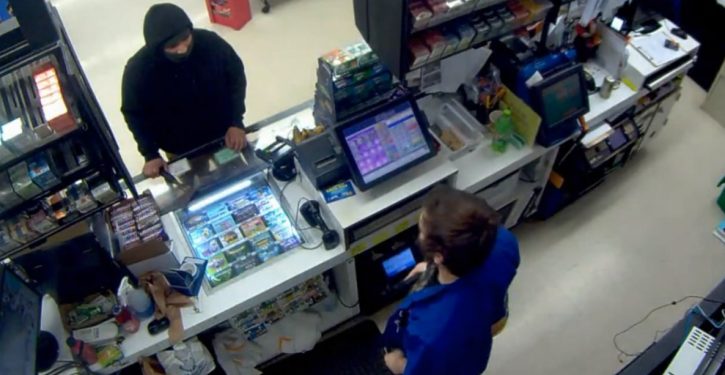 See the position of the pistol in the clerk's right hand, pointed safely away from both of the humans present. Security video, Clackamas County Sheriff via KOIN 6

This seems to explain a lot about Portland, Oregon.

According to KOIN 6, a convenience store clerk in Oak Grove, a suburb of Portland, was confronted in late April by a “customer” who apparently hoped to take cash from the register, and perhaps make off with some merchandise for free. The man came into the Plaid Pantry around 1 AM and pulled a foot-long hatchet from his pants. He “showed it” to the clerk, and in the security video (below) appeared to accompany his hatchet move with some words.  The would-be thief then laid the hatchet on the counter.

Almost instantaneously, the clerk — clearly with small arms training — pulled his pistol but held it in a safe position in front of him, not pointing it at the attacker.  With his left hand, he picked up his cell phone and called 911.

The position of the gun isn’t visible for most of the security video sequence at the counter, since the camera is behind the clerk.  But his well-trained response at the beginning is a good indication that he would have held the gun in a safe position throughout.  This appears to be exactly what he should have been doing, based on the quickly abject behavior of the attacker (who slumped on the counter, crouched down or went to his knees, and raised his hands, away from the hatchet and the counter, in a surrender gesture).

After a brief period, as the clerk’s call proceeded with the 911 responder, the attacker jumped up and bolted for the door.  (The video is edited, so it’s not clear how long the interval was. Not more than a minute or two, it appears.)  The last we see of him is security footage from outside, fleeing on foot in the dark.  The clerk made no effort to pursue him.

This looks like a textbook encounter to anyone with the most basic knowledge of self-defense with a sidearm.  A hearty “Well done” and “Stout fellow!” are due the clerk.  With well-disciplined use of the pistol, he defended his own life — surely the Plaid Pantry’s first consideration — while preventing the confrontation from escalating or bringing harm to anyone else. He managed to notify the police, and he didn’t make the error of trying to pursue the attempted robber.  For good measure, the would-be robber took off without his hatchet, leaving it on the counter, so he was disarmed at that point too.

The clerk is now out of a job, however.

The president of Plaid Pantry told KOIN 6 News the stores have a zero tolerance for weapons and the clerk is no longer employed there. He said employees are trained to de-escalate robbery situations to avoid injury.

Granted, if the clerk knew about the “zero tolerance policy for weapons,” he shouldn’t have had a weapon in the store.  (He probably shouldn’t have accepted employment there in the first place.)  But what an indictment it is of zero tolerance policies for weapons, that the clerk would have had no way to bring off the same very happy outcome if he hadn’t been armed himself.

De-escalating the situation is exactly what the clerk did.  The only way to reliably achieve that was to be armed; ideally, better armed than the attacker.

“De-escalate”?  The president of Plaid Pantry uses that word.  I do not think it means what he thinks it means.

SCOTUS blocks orders requiring GOP to redraw district lines in two key swing states
Next Post
Ex-CIA officials, fuming over declassification, seemed fine with intel agencies leaking like a sieve in the past