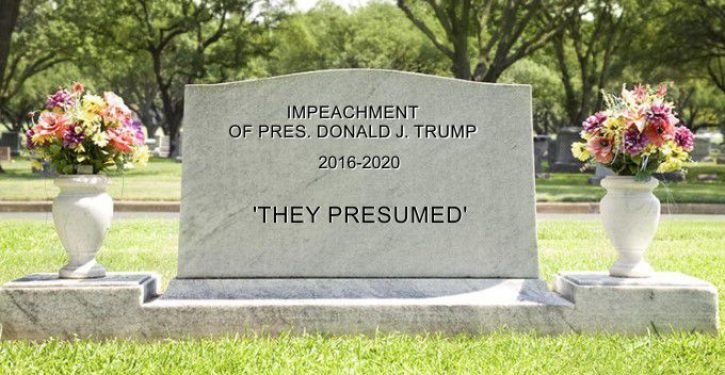 From the outset, the Left has known that when all is said and done, their efforts to undo the will of the electorate in the 2016 election will have failed bigly. As presidential hopeful Joe Biden acknowledged on Wednesday in a rare moment of lucidity, the impeachment fiasco will if anything make Donald Trump “stronger and harder to beat” in November. It could even cost the Democrats the House.

Biden added a caveat to this bleak assessment, suggesting that “Congress has no choice,” but that is pure rationalization. The bottom line is that since before the last election Democrats in power have despised Trump for being the person he is  — for being “unpresidential,” in a word. Their dislike of the man has had nothing to do with his stewardship of the nation, which has made it stronger, safer, and more prosperous.

So they cooked up an excuse for holding a show trial that would assuage their base even if was lacking utterly a foundation in fact. Perhaps no one moment from the entire impeachment charade better illustrates the sheer vapidity of the Democrats’ case than the following exchange between GOP Rep. Mike Turner and EU Amb. Gordon Sondland, which played out during the House Judiciary Committee hearings. A transcript of the money portion of the video follows:

Rep. Mike Turner: No one on this planet told you that Pres. Trump was tying aid to investigation, yes or no?

Turner: So, you really have no testimony today that ties Pres. Trump to a scheme to withhold aid from Ukraine in exchange for these investigations.

Sondland: Other than my own presumptions.

Turner: Which is nothing.

During their dozens of hours of exposition before the Senate in the past three days, the Democratic managers have peppered their speeches with as many video clips from the House hearings. This one, for some reason, has ended up on the cutting room floor. I wonder why.

One conservative commentator has quipped that this impeachment is the “Seinfeld” impeachment. It’s about nothing. Sadly for all of us, there’s plenty of truth behind that observation.

Rudy Giuliani threatens to go public with Biden corruption allegations
Next Post
Cartoon of the Day: You dirty rat! 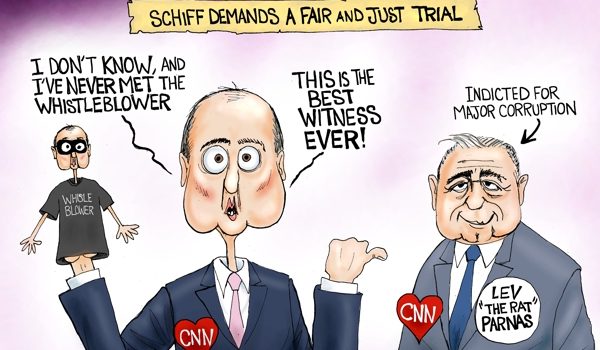