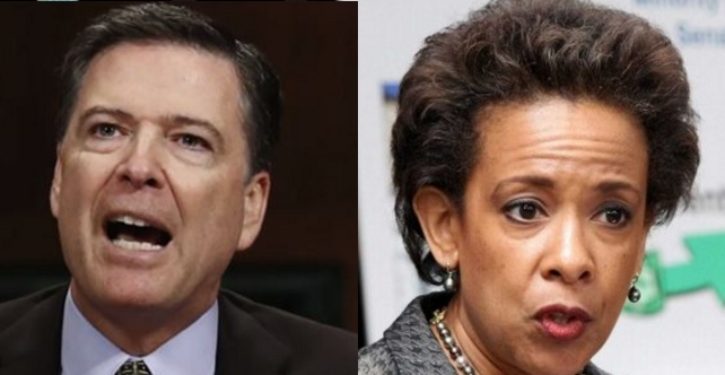 On Monday, Rep. Doug Collins, ranking Republican member of the House Judiciary Committee, released transcripts from several former Department of Justice officials, including Lynch and FBI deputy director Andrew McCabe. Lynch’s testimony reveals that either she or Comey lied to Congress. As Comey’s interview was under oath, he presumably stands to suffer the graver consequences.

Central to the bombshell testimony by Lynch is an incident in which Comey repeatedly claimed she had downgraded terminology for the Hillary Clinton private server investigation.

The former head of the FBI testified that he felt “queasy” after the AG asked him to refer to the probe of Clinton’s emails as a “matter” rather than an “investigation.” Said Comey:

[Lynch] told me to call it a matter, which confused and concerned me. But that was one of the bricks in the load that led me to conclude I have to step away from the [Justice] Department if we’re to close this case credibly.

Lynch, during her hearing before the House Committee on Oversight and Government Reform, recalled that she was “quite surprised” by this claim.

Loretta Lynch DENIES telling Comey to refer to the Clinton email case as a “matter,” rather than an investigation, directly contradicting statements made by Comey. SOMEONE IS LYING. pic.twitter.com/qb0U4Jopp3

Lynch is reminded that Comey made these statements under oath.

“I did not,” Lynch unequivocally responded when asked if she had directed Comey to downgrade the Clinton case from an investigation to a “matter.”

“I have never instructed a witness as to what to say specifically,” she added. “Never have, never will.”

While Comey’s repeated assertions that Lynch instructed him to use specific terminology when it came to the Clinton “matter” were under oath, Lynch may also have some legal troubles if she is proven to be the one lying.

“Ms. Lynch, you should also understand that although this interview is not under oath, you are required by law to answer questions from Congress truthfully,” Chairman Goodlatte stated prior to her questioning.

Former House Oversight Committee Chairman Trey Gowdy had lashed out at Comey after his testimony, insinuating that he was trying to serve as judge, jury, and executioner on the Clinton case.

“He appointed himself FBI director, attorney general, special counsel, lead investigator and the general arbiter of what is good and right in the world according to him,” he alleged in a fiery statement.

At Oversight/Judiciary Cmte hrng on IG rpt, Gowdy says Comey alone watered down findings, made the prosecution decision and did not take steps to call for Special Counsel

“We see Jim Comey and Jim Comey alone deciding which DOJ policies to follow and which to ignore,” Gowdy said.

Perhaps that statement provides some insight as to who made the false claims to Congress. If, as Lynch’s testimony suggests, Comey was lying, will the AG’s office investigate it finally?