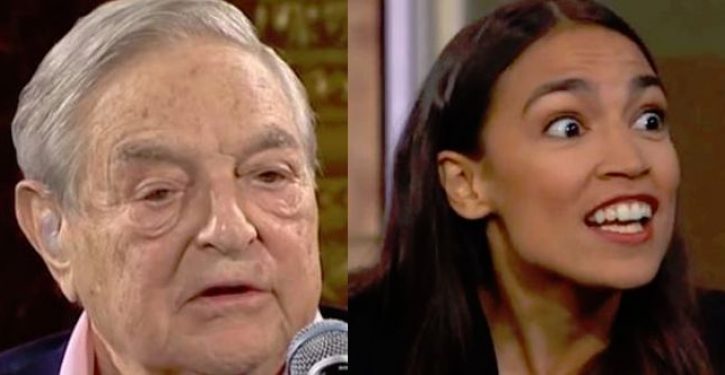 So far, every breath she has taken in her two-month-old career in the federal government has reinforced the sense that Alexandria Ocasio-Cortez is the least qualified person ever to hold such a post.

That sense has been underpinned by another: that she is clueless. That still may turn out to be the case, though a new report raises the possibility that AOC is just-plain duplicitous. Either way, these revelations prove her to be hypocritical.

The report, at Breitbart News, is by investigative journalist Aaron Klein, and notes that “the Green New Deal blueprint introduced by Rep. Alexandria Ocasio-Cortez was crafted by three far-left organizations and is being pushed by a coalition of well-funded professional progressive groups and known leftist agitators.”

The three groups Klein names are  the Sunrise Movement, Justice Democrats, and a group calling itself New Consensus. Klein proceeds meticulously to document the intricate web of ties between these groups and big money (aka, corporate greed), whose influence on government Ocasio-Cortez has sworn to expose.

By way of example, Klein notes that the Sunrise Movement “sponsored an activist campaign called ‘Operation Green New Deal Blitz.’ Co-sponsors with Sunrise include 350.org, Organic Consumers Association, People’s Action, CPD Action and Justice Democrats.” Further down, Klein observes that “350.org, which is aiding Sunrise in pushing the Green New Deal, has disclosed a donation from the Tides Foundation.”

And who is behind the Tides Foundation? That’s an easy one. The organization is financed by radical billionaire activist George Soros “and has been a donor partner of Soros’s Open Society Foundations.”

Justice Democrats, which is in partnership with the Sunrise Movement, for its part “backed the Congressional campaign of Ocasio-Cortez when she was largely unknown and the two are closely linked. According to reports, it was Justice Democrats that originally recruited Ocasio-Cortez to run in the first place.”

If Ocasio-Cortez is genuinely unaware of who she is in bed with, she is more naïve — and, considering her increasingly high visibility, dangerous — than anyone could have imagined.