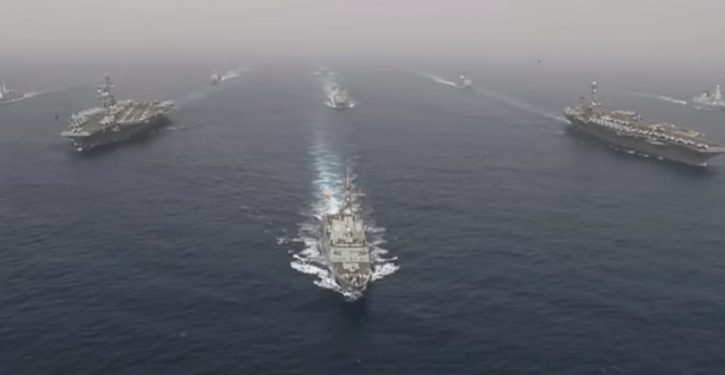 After John Bolton and Mike Pompeo came out in the last few days with pointed warnings to Iran – and specific reference to the deployment of the USS Abraham Lincoln (CVN-72) Carrier Strike Group, and an Air Force bomber task force – there were a lot of questions.

But there was one big one.  What was this about?

To frame the discussion, it’s useful to put down a marker from someone who obviously remembers well that carrier deployments have been routine, and done on a schedule, for a long, long time.  This observer is also, clearly, a – let us say, a Trump (and Bolton) skeptic.  He points out the routineness and scheduling factors advisedly:

A carrier into CENTCOM is not unusual & was likely routine & long planned.

The inflammatory language from Bolton is unusual/provocative but my guess is just an opportunity to try to intimidate the Iranians. Nothing more pic.twitter.com/aNyc5KNkOf

He’s not wrong – at least not about the first sentence.  I too would say that “A carrier into CENTCOM is not unusual & was likely routine & long planned.”  Fleet veterans know that if a carrier strike group deploys combat-ready, there are extremely few circumstances in which it could not be “routine & long planned.”  Basically, there’s only one, if the deployment is truly unplanned.  A ready strike group that just got back from deployment can be turned around on an emergency basis, within a certain window of its return.

Otherwise, the strike group that heads over is one that has been prepared for a deployment that was placed on a schedule long in advance.  There may be some room to fiddle with how long “long” is, and what the actual deployment dates are.  But carrier deployments are ultimately an elephants’ dance.  Too many moving parts, too much weight being slung around, too many breakables if you try to cut it too close.

That being said, it’s not necessarily deceptive or disingenuous to speak otherwise about strike group deployments.  The quality of the messaging depends not on the iron-clad necessity for scheduling when it comes to carriers, air wings, and their escorts, but on the state of the world.

And the state of the world has changed.  It changed profoundly in the Obama years, which is how we ended up with the Arab Spring, a Syrian civil war that’s been underway for eight years sucking light and energy into it like a black hole, a Libya completely disintegrated, an Iraq partially – and significantly – occupied by Iran-backed proxies, Hezbollah-trained Yemenis lobbing missiles at Saudi Arabia and passing commercial ships, and a portion of Ukraine invaded and annexed by Russia.

That’s not even getting started on China building virtual territory into the South China Sea, and Venezuela degenerating into an unrecognizable zombie of a nation.  Nor does it take into account Russia’s saber-rattling in Northern Europe, the Caucasus, and the North Atlantic Ocean.

Obama managed to get out the door without doing the kind of “force messaging” that we used to hear more of.  To an extent, the routineness of carrier deployments, amphibious group deployments, Air Force task force deployments, the rotations of Army and Marine Corps units through Afghanistan, and then – again – Iraq, all served to kind of paper over the lack of strategic messaging about America’s force posture.

It would have been really useful to get some strategic messaging on Libya in 2011, or Iraq and Syria in 2014.  We heard a few words from subordinates then about leading from behind, and “degrading and defeating” ISIS, but none of it seemed to connect to what we were actually doing.

That said, those operational interludes were difficult to “message” about, because ultimately, they weren’t really about anything – or at least nothing to which military force was a suitable solution.

That was a sharp contrast with the messaging people can remember about Iraq in 2003, Afghanistan in 2001, the Saddam-sanctions era over the preceding decade, the Balkans between 1992 and 1999, and Desert Storm in 1991.  That messaging, while exhaustively crafted and no easy task, was relatively simple and clear because each problem erupted distinctively in an otherwise static, or at least settling-down, state of global affairs.  Selecting an objective in each case didn’t imply breaking and reforming the “global order.”  New problem, to be sure, but same world.

It’s remarkable to say that now about Afghanistan and Iraq after 9/11/2001.  No one in 1992 would have imagined saying it one day about geopolitics after the collapse of the Soviet Union.  But the truth is that the world has changed far more since 2008 than it changed after 9/11, and in some ways even more than it changed after December 1991.

Carriers still require heroic and dictatorial scheduling, and they always will, until the platform itself is transformed technologically.  But what we mean with strike group deployments, and what we say about them, are separate issues, and they have been struggling to evolve for at least half a decade now.

We’re no longer in the post-1992 era in which there was no need to explain why carriers were swapping on and off station in the Persian Gulf on a routine basis.  In one way that can be a curse: it doesn’t look all that sharp to run around after your military assets, seeming to fiddle with the controls and come up with explanations about what they’re doing.

But it’s also a blessing, if the unpredictability of expectations about the military assets can work to your advantage.  That’s what I see happening with the Trump administration and Abraham Lincoln.  Trump’s national security officials have said comparatively little about the major muscle movements of the military over the last couple of years.  What they have said has been brief, cogent, and usually panned out – but it hasn’t been a refrain lulling everyone to sleep, as it was for a very long time.

Notably, that newly taciturn pattern has been at a time when our carrier strike group posture has changed somewhat.  We had a carrier group deploy for extended operations into the North Atlantic last year for the first time in nearly three decades.  We have also quietly cut the carrier’s near 24/365 tether to the Persian Gulf, where for more than a quarter century we always had one to provide air sorties for multiple operations, along with escorts toting plenty of Tomahawks.  There was no fanfare about that, but it’s not a foundational “given” of our military posture anymore.

So now, when Bolton and Pompeo are talking very specifically about why a duly-scheduled carrier is moving into CENTCOM just at this time, it rises above the noise and has meaning.  They’re not just being cute about something already scheduled.  They’re not talking because something scheduled is happening; they’re talking because the geostrategic situation has changed.

The situation, of course, has to do with exactly what they say it does: Iran.  Commentators seem to be getting this mostly right.  Besides Iran’s ongoing effort to ramp up the threat to the region, largely through proxy actors in Syria, Iraq, and Yemen, there is an easily foreseeable dynamic involving threats to U.S. interests as the Trump administration clamps down hard with sanctions on Iran’s oil and gas trade.

Reportedly, a general officer from the IRGC defected recently, and there is much speculation that information from him clarified the gravity of the threats Iran may have in mind.  That’s certainly a possibility.  It’s also a possibility that tightened sanctions enforcement will leave substantially fewer holes unplugged than in the past, and Iran may seek to react even more vigorously than envisioned at the moment.  Deterring Iran from doing that is clearly an intent that can be read into the statements from Bolton and Pompeo.

Two other dimensions are also prominent.  One is that Iran’s hand is behind the horrific barrage of rockets and missiles that poured into Israel from Gaza over the weekend.  Iran is likely to try to destabilize the region by spreading chaos and diffusing operational focus for the other nations, and engaging Israel is a default way to do that.  Deterrence is a good precaution here as well.

The second dimension is the other part of the world where Iran wants to reach out and touch the U.S.  That would be Over Here, in our own hemisphere.  Iran has been sending additional military “advisers” to Venezuela in recent weeks.  And I’m skeptical than that’s mainly because the Iranians think Maduro can be propped up.

At least some of what the Iranians in Venezuela are doing is probably about reposturing in the Americas.  While Maduro still holds a semblance of power is the time to do that: to move people, materiel, assets, before they have to be abandoned.  Iran has a lot invested in Venezuela.  If Maduro is dragged out the door, the Iranian regime doesn’t want to have to execute a disorderly retreat.  It will want to move stuff north (e.g., to Nicaragua, perhaps Cuba), rather than end up scrambling off to the east being chased by torches and pitchforks.

Iran may also double down on hemispheric efforts to hold the U.S. homeland at risk, as a means of lashing out when sanctions bite.  The “Iranians” arriving in Venezuela probably aren’t all actual Iranians.  Syrians and other Middle Easterners recruited by Iran have been ferried into Venezuela for some time now for the purpose of getting through Central America to Mexico and the United States.

For any or all of these endeavors, deterrence in the form of the Abraham Lincoln Carrier Strike Group and a highly professional Air Force bomber task force should be understood to be arriving in CENTCOM.

These forces aren’t going there to drop public-service leaflets on Syria, as in years past.  Trump, Bolton, and Pompeo have chosen a politically significant time – afforded by the elephants’ dance of carrier scheduling – to make that seminal point.