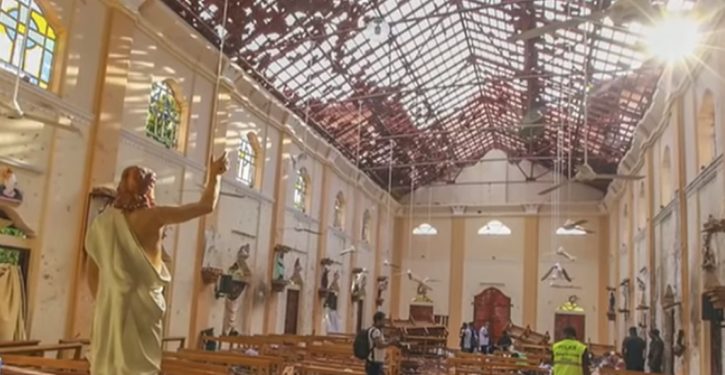 One of the key discussions we have had at Liberty Unyielding in the last few years is about developments in the use of terminology and how they shape our premises when we talk about issues.  Examples include things like the mainstream media referring to traditional-marriage supporters as “anti-LGBTQ,” as if that is an accurate characterization rather than a biased propaganda expression.  The same applies to calling people who want secure borders for the United States “white supremacists.”

This past Easter weekend, we saw the Left go beyond the obvious tendentiousness of its previous exertions in this area.  It has gone to a new level of deliberate exclusion of facts, and even to the complete loss of connection to reality.

Probably the most famous instance at this point is the choice of Barack Obama and Hillary Clinton to decry the bombing attacks in Sri Lanka as attacks on “Easter worshippers.”

The attacks were at churches and hotels.  To the extent the latter may have been full of Christians traveling for Easter, perhaps there is a case that referring to “Easter worshippers” covers territory similar to what would be covered by referring to “Hajj pilgrims” if there were attacks at multiple venues in Mecca.

But frankly, the thought process there would be weirdly elaborate for simply condemning a set of terrorist attacks that obviously targeted Christians.  The weirdness is thrown into relief by comparison with what both Obama and Clinton tweeted out after the terror attack on Muslims in New Zealand.  Numerous Twitter users offered the side-by-side examples.

Strange difference in tone between condemnations of a terrorist attacks on Muslims after New Zealand & against Christians after Sri Lanka. Note the absence of words “terrorism” & “Christianity”. This Muslim stands with persecuted Christians globally &all minorities everywhere ?? pic.twitter.com/ylSDCU6ICe

You have to go out of your way to not acknowledge that bombing multiple churches during services on Sunday – any Sunday, not just Easter – is attacking Christians.  The same would be true of talking about an attack on a mosque during the Friday service and failing to just say “Muslims” were the victims.

It’s not OK to let that go.  Christians were attacked (by Islamist terrorists, according to Sri Lankan authorities), and in a very large, campaign-size operation that killed hundreds, and is still being uncovered in terms of finding bombs and logistic preparations.  It matters that that truth be stated clearly and remembered for what it is.  It doesn’t matter to the dead; it matters to the living, to how we think about this event and what we think needs to be done.

Jesus as a “Palestinian”

Another instance from Easter weekend is a New York Times article in which writer Eric Copage opines that Jesus, besides not being “white,” was “most likely a Palestinian man with dark skin.”

Both of these characterizations – not “white,” and “Palestinian with dark skin” – are humorously anachronistic.  Going by his biblical genealogy, Jesus was a descendant of Shem and Abraham, culturally a Jew of the then-remaining provinces of the original Kingdom of Israel.  The genetic and racial categories we think in now are cultural constructs based on latterly-accumulated ideas.  They were not applicable to his time.  He most probably didn’t have the lighter skin characteristic of some European tribes in his time, which we now call “white.”  Peoples in his region’s neighborhood did, such as some Assyrians, Persians, and Syrian Greeks.  But Jesus very likely did have darker skin.

There was a marvelous image created some years back of what Jesus would most typically have looked like, as an average man of his genetic heritage and setting in Roman-occupied Judea 2,000 years ago.

But, as Hank Berrien (and Noah Pollak) point out, Jesus could not have been “Palestinian,” since there was no such thing as Palestine or a Palestinian.  And Jesus was certainly not an Arab.  Arabs didn’t conquer the area Jesus lived in – Galilee, Judea – until some six centuries after Jesus walked the earth.

Hank Berrien notes further the most important omission from Eric Copage’s treatment, which is that Jesus was a Jew.  That’s what matters to the beliefs of Christianity.  Jesus wasn’t just a Jew by ethnic or tribal affiliation; he was an observant Jew who studied the Law in the Temple in Jerusalem.  He was a Jew of his time, in the ancestral homeland of the Israelites.  He spent his childhood in Galilee and was culturally a Judean Jew as an adult.

Jesus can’t be made “Palestinian” by linguistic sleight-of-hand, but the post-modern Left continues to try.  In doing so, it relies on ignorance of both secular history and Christianity – and it apparently attempts to rewrite both.

In terms of history, Jesus cannot have been a “Palestinian,” nor is it historically meaningful to say he was “not white.”  If anything from Jesus’s time had an even somewhat similar cultural import, it might be saying that Jesus was “not Roman,” or perhaps (and you’d have to let the Romans and Greeks of the time fight this one out), “not Greek.”  The people we call “white” today, with all the political freight the term carries, were unlettered tribes in Central and Northern Europe in Jesus’s time, living in huts, worshipping trees, being taken by the Romans as slaves, and painting themselves blue.

In terms of Christianity, what’s meaningful is that Jesus was a Jew, born in circumstances that fulfilled prophecy (which included his being a descendant of Isaac, Jacob, and David). Anti-historical and anti-biblical claims about Jesus denature him for the purposes of Christian belief.

In doing so, they rob “Jesus” of any power to confer magical legitimacy on anachronistic fables about “Palestine.”  The lie reaches around and punches itself out.

The final instance I ran across on Monday was an exchange on Twitter, incident to one tweep’s tweet of the Hank Berrien post at Daily Wire.

Jesus existed before the name "Palestine" was even coined by the Romans. This is historical revisionism at its finest. The @nytimes is truly the worst. https://t.co/g6sZssBjP7

His interlocutor in the tweet’s replies posed an identifiably leftist proposition: that “Evangelicals” have a “dedication to establishing ‘The heaven-ordained supremacy of the White race’ before, during and after the Civil War.”

No. Historical revisionism at its finest is Ben Shapiro's latest book. That, and the refusal to acknowledge Evangelicals' dedication to establishing "The heaven-ordained supremacy of the White race" before, during and after the Civil War. Stop pretending…

This bizarre interjection, basically an utter non sequitur, wouldn’t be worth bothering with, except that it is a fine example of the bait-and-switch with which too much of the Left’s discourse is now suffused.  When the first tweep, @ElliottRHams, challenges him on his point, the second tweep (@AmericanHisto20) marshals as proof not an evangelical anyone has ever heard of, but a Confederate soldier:

"As a people, we are fighting to maintain the heaven ordained supremacy of the white man over the inferior or colored race: a white flag would thus be emblematical of our cause." -William T. Thompson, Confederate soldier, designer of the Confederate Flag. (Note "heaven-ordained")

It shouldn’t even require saying that a Confederate soldier from the Civil War is not an exemplar of the beliefs of Christian evangelicals in the 2010s.

The attempt here is to mash together Confederate-era thinking about the races, the concept of “white supremacy,” and the word “Evangelicals,” in order to tar modern evangelicals with the brush of a Confederate no evangelical Christian today could pick out of a lineup.

Yet this is characteristic of virtually all discussions of “white supremacy” now.  Calling someone or something “white supremacist” has become an exercise in irrational impressionism.  The riff here seems to be on Eric Copage’s original point about Jesus not being the fair-skinned, blue-eyed fellow often depicted in the art of post-Renaissance Europe (and 20th-century America).  But the riff is not about Jesus at all; it’s about demonizing “white” people in 2019, by throwing scare words at the wall and seeing what sticks.

It’s incoherent nonsense: freighted words deployed without parsable logic, but with the obvious intent of the propagandist.  It’s getting worse.  It’s one thing to have speech that needs to be called out, like referring to Christians as “Easter worshippers” instead of just the obvious, straightforward “Christians,” or the sleight-of-hand effort to make “Palestinian” a thing that Jesus was.

But now some of the linguistic assaults are lunatic to the point that there’s no responding to them.  The ongoing propaganda assault about “white supremacism” (or, illiterately, “white supremacy”) is such a fog of absurdity, I don’t even pay attention to it anymore.  There’s no point.  Unless someone is literally talking about the reprehensible Richard Spencer and his card-carrying followers, it doesn’t describe anything real or meaningful.  It’s just an excuse to throw spittle.

This last kind of blithering babble isn’t worth calling out, except as sound and fury, signifying nothing.  That’s alarming, because there is a great deal of it coming from the mainstream media and even some Democratic politicians.

It’s also problematic because it poisons communication in the public square, making it harder and harder to talk with common purpose about things that are real.  We should be able to talk about what Richard Spencer represents, and all mean the same thing, without implying falsely that tens of millions of Americans also fall within that meaning.  But we can’t, because the Left won’t let us.  A similar problem arises if “hate crime” hoaxes can desensitize us to the occasional spectacular crime of invidious hate that is real, such as the slaughter of Jews at the Tree of Life Synagogue in Pittsburgh.

People who refuse to engage on the basis of false, deceitful, biased, and even demented language aren’t hateful or insensitive.  They’re sane.  Too much that we hear from the Left no longer is. 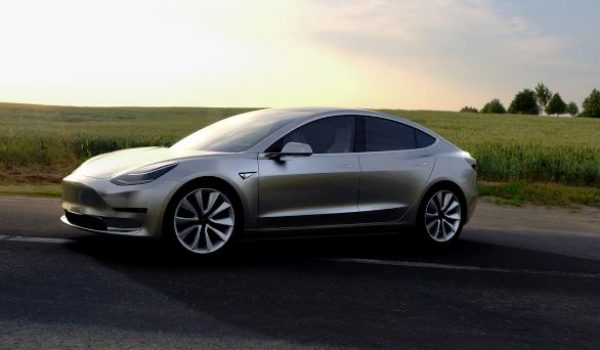 Study: CO2 burden significantly higher for electric vehicles than for diesel engines
Next Post
Sanders: Right to vote should be extended ‘even to terrible people’ like Boston Marathon bomber