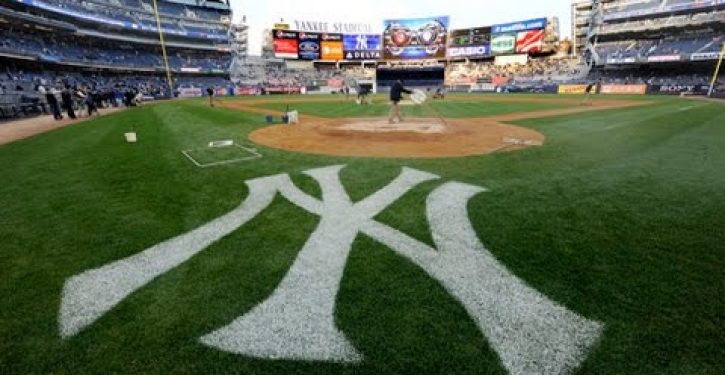 What’s saddest about the latest “statue to be toppled” is not that the putative offense behind it is based on a misreading of the history (more on which shortly). Nor is it the Left’s conspicuous double standard when it comes to dealing with offenders (more on which, etc.). It is the sobering reality that there are people among us who have nothing better to do with their time than chase down the most obscure minutiae with an eye toward cleansing America of its racist past.

New York’s Daily News doesn’t reveal who made the New York Yankees aware that American singer Kate Smith — whose rendition of “God Bless America” has been played during the seventh inning stretch of games since the 9/11 — also recorded a couple of “potentially” (their qualifier) racist ditties in the 1930s. One, “That’s Why Darkies Were Born,” included the lyrics, “Someone had to pick the cotton/Someone had to plant the corn.”

But now that the Yankees organization has been alerted, the Smith recording is out, replaced by an instrumental rendition on the stadium organ. “The Yankees take social, racial and cultural insensitivities very seriously,” the team explained in a statement, adding, “And while no final conclusions have been made, we are erring on the side of sensitivity.”

The Philadelphia Flyers, which have been playing Smith’s “God Bless America” for luck ever since the songstress performed it at live in the team’s arena before they won the first of their two Stanley Cup titles in 1974, has also banished the recording, The Washington Post reports. But the team didn’t stop there. They also threw a tarp over a bronze statue of the singer outside the arena. (Statue to be toppled in 5, 4, 3, …?)

So what’s so odious about these efforts to eradicate racism? As the Daily News notes, “some people have described ‘That’s Why Darkies Were Born’ as a satire of white supremacists. The song … was also recorded by Paul Robeson, the son of a runaway slave who would go on to become a civil rights activist.”

Then there’s also the unresolved matter of Ralph Northam, who remains governor of Virginia despite the surfacing in February of photos from his high school yearbook that show him in blackface and a Klan robe. If he were a Republican, he would have been gone long ago, but his second in command — Justin Fairfax — is also under the gun, facing allegations of sexual assault by two women. If both Northam and Fairfax were forced out, a Republican would become the state’s top executive, suggesting that perhaps for the Left racism is trumped by politics.

Returning to the larger issue — the crusade to exorcise America’s racist demons — where does it stop? Scrutiny of American songwriter Stephen Foster, who lived in the first half of the nineteenth century and wrote frequently about the plight of slaves, has already led to the removal of a statue of him from a park in his hometown of Pittsburgh. How long before his entire body of music is expunged?

Mortgage lenders are not homophobic
Next Post
Poll: Obama is the worst president since World War II