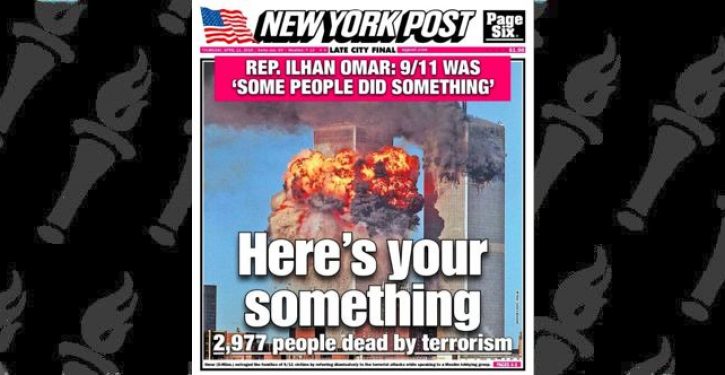 Part of the oath that Alexandria Ocasio-Cortez took when she was “inaugurated” on Jan. 3 was a pledge to “support and defend the Constitution of the United States against all enemies.” Although the oath, found in Title 5, Section 3331 of the U.S. Code, does not go into detail on the contents of the Constitution, one amendment Ocasio-Cortez is likely familiar with — and certainly the most often cited — is the first, which guarantees among other things a free press and free speech.

In spite of this pledge, the freshman representative is endorsing a boycott of the New York Post over the cover depicted above. The headline, “Here’s your something,” riffs on Democratic Rep. Ilhan Omar’s unfortunate description of the Sept. 11, 2001 terror attacks as “some people did something.”

Ocasio-Cortez was asked about the boycott in an interview last Sunday with Michael Isikoff of Yahoo News, who subsequently wrote, “Ever since she was elected last November, the Post has relentlessly attacked Ocasio-Cortez over her progressive views.” But as Isikoff, an industry veteran knows only too well, it is the media’s prerogative to go after any politician they choose. Politicians don’t enjoy the same prerogative. That Isikoff is aware of this as well is implicit in his criticism of Donald Trump for for his verbal assault of the mainstream media, which attack him incessantly.

Here is an audio of his exchange with Ocasio-Cortez, in which she dismisses the Post as a “toy” (shades of Trump calling the mainstream media “fake news”?).

Her interview with Isikoff is not the first indictment of the Post since it published what she calls its “triggering” image. Last Thursday she spoke with reporters on Capitol Hill, opining that “this is incitement of violence against progressive women of color.”

When all else fails, play the race or sex card. 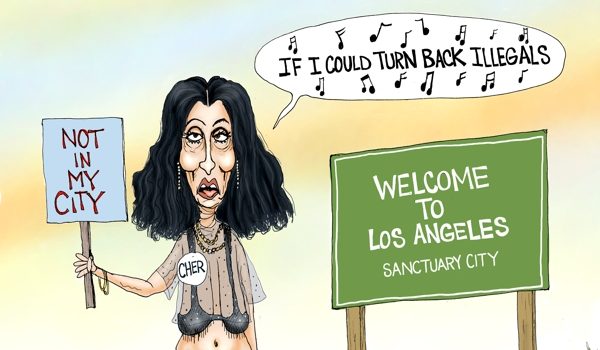 Cartoon of the Day: Cher the love
Next Post
GOP senators demand to see ‘highly classified’ FBI memo about the Hillary probe