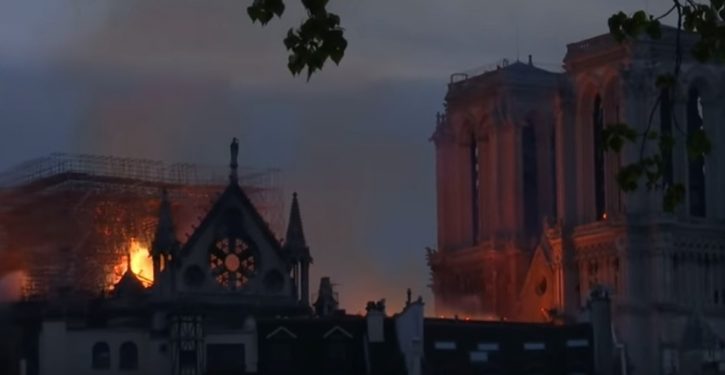 There seemed to be so little that was worth saying aloud, as the news broke that a devastating fire raged in Notre Dame Cathedral in Paris.

For Christians, the timing must speak, whether or not we agree on what it says.  This is the Monday of Holy Week, the day after Palm Sunday and part of the countdown to Good Friday and Easter, the day of commemorating Jesus’s resurrection.

After such a beginning, what else can Holy Week of 2019 have in store?

This @AFP photo, with ravens flying above the burning Notre Dame feels like the end of the world pic.twitter.com/BwM8cl4SCz

In terms of prosaic details, we at least have an encouraging update that the fire has been contained, and the majestic twin belfries will survive.

The Mayor of Paris now saying that the fire is now contained–and the two towers will hopefully remain. A glimpse of hope on a very sad #HolyMonday #PrayforNotreDame pic.twitter.com/3nDQTXlN5z

Millions watched in horror Monday as video captured on-scene showed the cathedral spire splitting off its base and collapsing into the inferno below.  The roof – the wooden structure crowning the main central portion of the building – had collapsed earlier, its gigantic timbers plummeting into the flames.

Thousands of stunned people stopped in the streets of Paris, silently watching as they watched a huge fire rip through the Notre Dame Cathedral. When the spire collapsed, a cry of disbelief rang out. https://t.co/zDsJbyvi2t

#Paris Built in 1163.Took 200 years to complete.
It survived revolutions, plagues& world wars.
&now, the evening of April 15th 2019 the Notre Dame in Paris burns.
All history gone
The world stands helpless as history disappears before our eyes #NotreDame pic.twitter.com/6WImuL2VWb

But the first images from inside show that much of the sanctuary survived.  A report circulating on social media indicates that although one of the iconic rose windows fell from its casings, the rest are still there.

Other reports emerged earlier that priceless artifacts and relics from the cathedral had already been removed – before the restoration work that may have caused the fire began – or were evacuated on Monday in time to save them from the fire.

Relics at Notre Dame, including the Crown of Thorns, have been taken to a safe place, Paris mayor confirms https://t.co/A2H5Y6Jp89 pic.twitter.com/mTzGpsonTV

One image in particular is tugging at hearts and throats around the world.

Crazy photo of the altar inside Notre Dame, by Reuters' Philippe Wojazer pic.twitter.com/KjRPSVKJRA

A video-clip view of the altar as firefighters head in.

Powerful footage from Paris. Amidst the flames, ash, and rubble, the altar and cross clearly remain intact at Notre-Dame Cathedral. Truly a symbol of hope, purpose, and love during Holy Week as we prepare to celebrate Easter around the world. pic.twitter.com/JHCOh2u7qU

One need not even observe that Notre Dame is more than 850 years old (its construction began in 1163; it was consecrated in 1177 in a partially completed state, and officially completed on the original plan in 1260.  The well-known flying buttresses were added in the 14th century).  Everyone reading this has probably heard that already in the last 12 hours.

Readers may also know that the cathedral survived significant damage in the 1789 Revolution, and that it was furbished up by Napoleon I, underwent major reconstruction beginning in the 1840s under the restored monarchy, and had its spire rebuilt by Napoleon III after his declaration of a new empire following the 1848 Revolution (and a brief republican presidency).  The Notre Dame we living generations have known dates in large part to the 19th century.

But the original structure was contemporary with Louis VII and Eleanor of Aquitaine, predating the Hundred Years’ War by nearly two centuries.  Notre Dame has had its share of mishaps since.  It has survived as a civilizational touchstone, a calendar in stone, wood, and metal of the story of Europe and the Christian West.  Its Gothic character evokes a spinoff legacy of Rome, but not Rome itself, and in that sense, it seems like a thread that began where our true, modern ancestral memories do.  Unlike the Forum and the Colosseum, Notre Dame cathedral has a life among us today; we use it for its original purpose even now, celebrating Mass, playing hymns on the great organs, singing and praying – and not just taking guided tours through roped paths with our smartphones out snapping photographs.

Still can’t believe this happened. I was just at Palm Sunday mass at Notre Dame yesterday. It was my favorite place in Paris❤️ #NotreDame pic.twitter.com/sgVyNNsLrh

Or we did do that, until about 18 hours ago.  On social media on Monday, I saw comment after comment on the theme that this is either a warning to or a knell tolling for the West.  I’m not here to say it isn’t.  President Emanuel Macron vows to rebuild the cathedral, and all things being equal, there’s no reason that can’t be done.

▶️ Macron on Notre Dame: 'This cathedral will be rebuilt' https://t.co/0tTFE9wSGf pic.twitter.com/0T1lbLTMXP

And at least one French donor has already stepped up.

The family of French billionaire François Pinault has reportedly pledged €100 million ($113 million) to the reconstruction of the fire-ravaged Notre Dame cathedral https://t.co/HoGFpcNrWe pic.twitter.com/n9dTjIDOOw

But it isn’t actually about architecture, art, or construction.  Nothing brings that home like the sympathy tweet from America’s favorite new congresswoman.

Art and architecture have a unique ability to help us connect across our differences and bring people together in important ways. Thinking of the people of Paris and praying for every first responder trying to save this wonder.

Of course, every part of the world today faces social and moral challenges from within that divide bone from sinew, soul from spirit.

Practically everyone has weighed in characteristically on the conflagration at Notre Dame.  And the upshot of the collective inadequacy is that we should probably all just forgive each other and not get our noses out of joint.

I wish y'all had that same energy when Brazil historic museum caught fire.
Appreciate history from all cultures#NotreDame

So everyone is whining about Notre Dame, but if a fire laid by humans kills thousands of trees and animals in the rain forest no one cares. Apparently a building is worth more than life.

Meanwhile, A pro-#Erdogan newspaper, Yeni Akit, is cheering the #NotreDame fire over France's remembrance of the #ArmenianGenocide. ? pic.twitter.com/kyfa0fkt0p

The Notre-Dame fire has confirmed three things we already knew to be true: Paris is spectacularly beautiful, firefighters are the true heroes of this world, Trump is an asinine dolt.

Rep. Steve Cohen (D-TN) politicizes the Notre Dame Cathedral fire to attack President Donald Trump, says: "What he has done to the Constitution and the rule of law is as bad as that fire did to Notre Dame" pic.twitter.com/HsjXIUdD43

So horrible to watch the massive fire at Notre Dame Cathedral in Paris. Perhaps flying water tankers could be used to put it out. Must act quickly!

Notre Dame is one of the world’s great treasures, and we’re thinking of the people of France in your time of grief. It’s in our nature to mourn when we see history lost – but it’s also in our nature to rebuild for tomorrow, as strong as we can. pic.twitter.com/SpMEvv1BzB

A surreal moment on Fox, Shepard Smith has to abruptly end an interview with a French elected official who says about the Notre Dame fire that the "politically correct will try to tell you this is an accident" pic.twitter.com/aUwoH7YVpl

DEVELOPING….. French Media Confirms There Were NO CONSTRUCTION WORKERS at Notre Dame Cathedral at Time of Fire https://t.co/JFSst6IZSj via @gatewaypundit

My heart goes out to Paris. Notre Dame is a symbol of our ability as human beings to unite for a higher purpose—to build breathtaking spaces for worship that no one person could have built on their own. I wish France strength and shared purpose as they grieve and rebuild.

San Francisco’s City Hall is lit up in support of the Notre Dame fire pic.twitter.com/jaUVvjLiZQ

As we watch in horror the fire at the Notre Dame Cathedral, let’s not forget three Black churches in Louisiana burned down by son of the Deputy Sheriff. Don’t turn a blind eye.

Give what you can and let’s help restore these houses of God. ?: @nytimes https://t.co/GMcAz2fFER pic.twitter.com/02enU0jEP6

"A Blow to the Hearts of Crusader Leaders" – ISIS Supporters Cheer as Fire Rips Through Notre Dame Cathedral in Paris https://t.co/7V6BOMQlLO via @gatewaypundit

I was struck by three things that don’t seem accidental.  A nighttime crowd watching somberly as firefighters surged against the flames was singing to the tune of Smetana’s “Ma Vlast” (My Homeland), which is also the tune for the national anthem of Israel, “Hatikvah” (The Hope).

#Paris| #NotreDameCathedral — crowds gather all around Île Saint-Louis tonight paying respects through song. This was Pont de la Tournelle at 1am w/ the Cathedral in the background. Firefighters continuing to pour tons of water into the central structure from elevated platforms. pic.twitter.com/0b0UpHbx9t

Perhaps someone did sing “La Marseillaise” somewhere today while keeping vigil near Notre Dame, but I haven’t seen video of it.  The Frenchness of Notre Dame de Paris long predates the era of the Revolution and “La Marseillaise,” and I don’t think many misunderstand the impact of that on what bereaved crowds choose to sing.

In the same vein, the second thing is that crowds were singing (mostly) “Ave Maria.”  Whether or not they were in a majority, there were plenty of Parisians whose first thought was to pray for the life of a great church.

Crowds gathered to sing hymns outside the Notre Dame cathedral on Monday evening after the Parisian landmark was engulfed in flames https://t.co/wd65veTecx pic.twitter.com/fqWT9D6tp7

The third thing is a simple one.

A cathedral is just a building.  We know that.  Even precious artifacts and unique relics are just temporal things that will eventually subside into dust.  But those facts don’t mean that the timing of events that cut through us like a knife doesn’t have a meaning of its own.  If you believe we have meaning, as human Creation in our time and place, you see that this does.

What the meaning is, I don’t know that any of us is appointed to give a ruling on.  That is itself an informative point.  Without presuming to proclaim it to others, I will say that for me, in this most remarkable of times, both the agony of Notre Dame during Holy Week, and what looks to be saved out of it, are signals: to ponder not what the people of the earth are saying, but what God is.

Lawyers should not have to attend law school before practicing law
Next Post
Trump sanctuary city idea could help migrants stay in U.S.