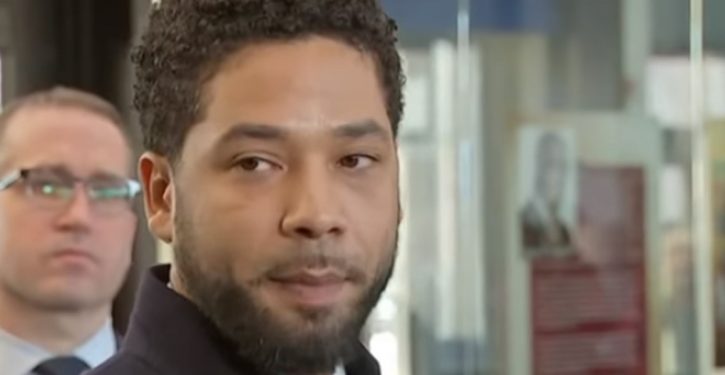 This development is so weirdly overt and in-your-face, it could only have happened in 2019.

Our earlier article linked to the extensive evidence on which the indictment was based.  Granting that defendants are innocent until proven guilty, the charges certainly appeared to warrant prosecution.  Simply dropping them as if the Chicago police had failed to assemble a compelling case makes no sense.  I’ve never had a bloodthirsty desire to see Smollett hammered within an inch of his life over this, but considering how his allegations preoccupied an overworked police department in a city with a high homicide rate and serious public safety problems, some jail time and a cautionary example seemed appropriate.

The police superintendent, Eddie Johnson, was reportedly caught by surprise when the prosecutor’s decision was announced on Tuesday morning.  He was attending a ceremony for new police officers at the time, and according to local news affiliates, he and his senior staff, along with Mayor Rahm Emanuel, called their impromptu press conference immediately after the ceremony.

They minced no words in expressing their shock and dismay at the prosecutor’s move.

It’s hard to read dismissing a set of well-founded charges as anything but a slap in the face to the Chicago Police Department.  Jussie Smollett, speaking Tuesday morning (see video below, starting at the 6:15 mark), compounded that reading by insisting that he has been “truthful and consistent throughout” – a claim for which there is ample counter-evidence already in the public record.

This has all the unbelievable aspect of a Big Lie being rammed down our throats.  There was some garbled allusion after the prosecutor’s announcement to a sort of plea deal involving community service – but in a presser this morning Smollett’s attorney was clear that there was no plea deal and no deferred prosecution agreement.

In any case, charges aren’t comprehensively dismissed with a plea deal.  At least one charge is pleaded to.  Even with a deferred prosecution agreement – contingent on good behavior – the charges remain hanging over the defendant to guarantee his good behavior.

So none of it makes sense.  Until, that is, the rest of the story starts coming out.

One part of the story is what Joel Pollak reports at Breitbart: that George Soros contributed $408,000 to State’s Attorney Kim Foxx’s election campaign in 2016.  This wasn’t a distant or indirect connection either; i.e., a situation in which Soros contributed that much to a general pool of funds from which some lesser amount went to Foxx.  She was the recipient of the $408,000 via a super PAC (Illinois Safety & Justice) created to support her campaign.

Pollak goes on to remind us of Soros’s push to target district attorney races and get far-left candidates elected, a topic we have published on before.  An Illinois state’s attorney backed by Soros is guaranteed to make radical moves.

At least some of those moves are likely to be made because of ties to the local far-left network.  Chicago media reported last week that the Chicago police union wanted to have Kim Foxx’s handling of the Smollett case investigated, because of alleged intervention that could hardly have come from a higher level: Tina Tchen, an attorney who “formerly served as chief of staff to Michelle Obama and as an assistant to Barack Obama.”

In a peculiar sequence of events, Ms. Tchen reportedly put a member of the Smollett family (which has separate ties to the Obamas) in touch with Foxx.

I can't quite put my finger on it… but I feel like Jussie Smollett had a Chicago PD "Get of Jail Free Card." pic.twitter.com/HR4vxxAIxZ

Foxx recused herself from the case after this contact became known.

But on Tuesday, 26 March, she apparently suddenly un-recused herself and dismissed the charges against Jussie Smollett.

Now, I see you folks out there shaking your heads over this insanely, glaringly improper travesty of law enforcement and justice.  Who knew we’d all find so much common ground with Rahm Emanuel?  “This is wrong, full stop.” It makes a mockery of the justice system, of equality before the law, of the purpose of Illinois’s hate-crime statute.

We can’t foresee what will come crashing down with this move, or how.  But 2019 is not the year to be making bad-faith moves against the public good.  Karma caught up with Michael Avenatti yesterday in a matter of 47 minutes.  (Strangely enough, that case was actually connected to this one through Avenatti’s alleged co-conspirator in extortion, Mark Geragos, who’s been representing Jussie Smollett.)

Karma is going to and fro in the land, and walking up and down in it.  Karma has Chicago – and whoever and whatever else are implicated in this bizarre situation – on her itinerary. 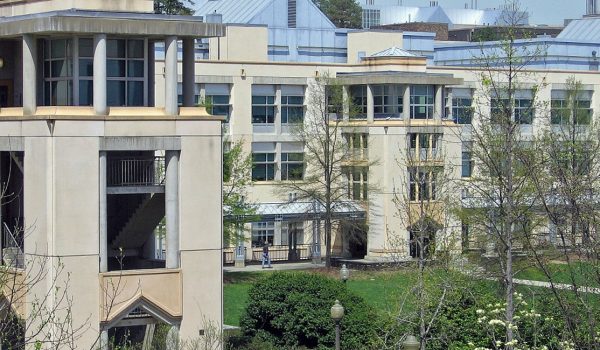