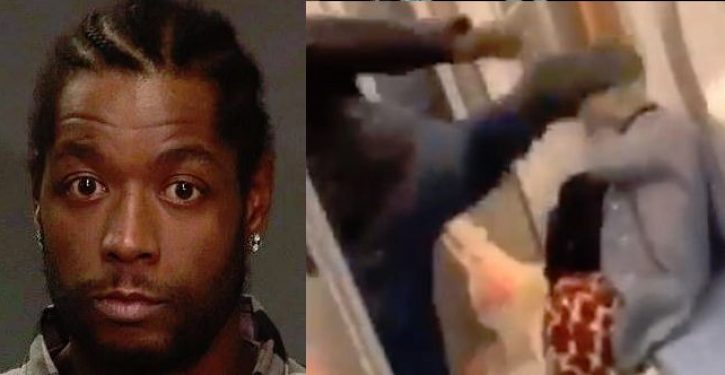 The initial reaction to this disturbing incident, which was captured on a cell phone video and went viral before the details were known, focused on the depraved indifference of straphangers on a New York City subway train. Matt Walsh, writing at The Daily Wire, was less struck by the savageness of the attack than by the behavior of “a group of onlookers” who stood “watching and cheering like they’re at a professional wrestling match.”

Although the actions of the onlookers can’t be condoned, the video made by one of them did help police ultimately identify the culprit, Marc Gomez, who was arrested at his home yesterday. As though the assault were not brutal enough, Gomez “told people recording him as he kicked his helpless victim in the face to upload the clip onto video blog World Star Hip Hop,” according to New York’s Daily News.

The video follows, though be warned: The violence is graphic and may not be suitable for some viewers.

Today, another eyewitness weighed in, giving a slightly different version of events. Gomez’s fiancée, Alicia Cox, told the New York Post that the old woman was the aggressor and that Gomez is a “good man.” According to Cox, she, her daughter, and Gomez were heading home from a birthday party when the old woman began screaming, “I’ll stab you. You and your wife and your child!”

“Again, she yelled, ‘I kill your daughter,’” Cox said. “And she had something in her hand. She shifted towards us and the door and [Gomez] lost it.”

“He just started kicking her.”

There is no mention in Cox’s story of Gomez instructing onlookers who recorded the assault to upload his “trophy” video to a hip hop website. Nor does she explain why even a single kick to the head, let alone a fusillade of them, was necessary to subdue a 78-year-old woman who, if we are to believe her account, had only verbally threatened them. Gomez claims the woman came at him with a knife, but doesn’t seem likely either. Neither does the claim that she approached them at the door since she remains seated throughout the video.

Happily, the police didn’t buy his story. On Saturday he was charged with felony assault and ordered held in lieu of $30,000 bail.