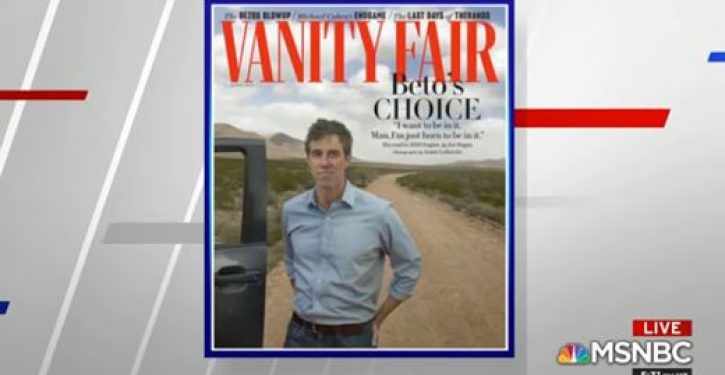 Running for president in the age of celebrity is one of the fastest and surest ways to become a bona fide celebrity. Even failing to win one’s party’s nomination is still a win-win since the title “former presidential candidate” beefs up his résumé and increases name recognition, thus paying dividends with TV gigs, speaking engagements, and book deals.

There is little downside because running for commander-in-chief can pave the way for another elective office or an easier re-election to one’s current office. But best of all, history proves that an initial run for president increases the prospects of winning the nomination the second time around.

So what’s not to like? These pluses seem to be precisely why there will be standing room only on the debate stage for 2020 Democrats. (The last time I checked there were at least 18 candidates, with more still “flirting” and “exploring,” which means the party might need to rent a Super Bowl halftime stage for debates.)

Of course, only a handful will be able to reach and sustain A-list celebrity status because that requires “a hook” – the unique ability to keep the media’s attention in a crowded field. Hooks cannot be bought or even taught. It is a rare quality endowed by the Creator that blesses a candidate with continuous star power, charisma, and an aura of invincibility. A hook on the campaign trail allows one to generate that special something which leaves the media and consumers of media wanting more – at least until the next candidate with a shiny hook comes along.

The best recent examples of this in the age of celebrity are Barack Obama and Donald Trump. Although polar opposites in temperament, personality and policy, their success stories are instructive for the 2020 field.

Obama was the first rock-star/messiah candidate “famous for being famous.” In 2008 he ascended to the presidency with what remains arguably the thinnest résumé in U.S. history. But his lack of political experience mattered little to millions of his fans, whom he converted into voters after the media propelled him to stardom the likes of which our nation had never seen. And to Obama’s credit, he “ate the lens” with an extraordinary ability to connect, communicate, and leverage his unusual personal story enough to be elected the first African-American president.

In the general election campaign, Obama’s celebrity was so excessive that his GOP opponent, Sen. John McCain, tried to turn it into a liability with a TV ad that opened with this line: “He is the biggest celebrity in the world, but is he ready to lead?”

Trump in 2016 was also the biggest celebrity in the world, one who showered the media with high ratings and profits even though he was their natural enemy. But, by winning 304 electoral votes, Trump answered the question of whether voters thought he was ready to lead.

However, with the current crop of candidates, is anyone even talking about leadership? No, because it appears now that “celebrity” trumps that quality.

Exhibit “A” is Beto O’Rourke. He was a three-term congressman from El Paso, Texas and few people outside of his district had ever heard his name. That was, until last year’s midterm election when he came within 2.5 percentage points of defeating Sen. Ted Cruz — and raised $80 million in the process. A star was born, and “Beto-mania” was birthed. Last weekend, he announced his presidential intentions and raised $6.1 million online in the first 24 hours. Whether that impressive haul means Beto-mania will follow the sam trajectory as Obama-mania is to be determined. But this we know: Obama compared himself to Beto shortly after the midterms, which could be interpreted as a messianic anointing.

So what is his hook? At 46 years old he looks eerily like Sen. Robert Kennedy, who was assassinated at age 42 in 1968. But Beto keeps proving that he is not ready for prime time, starting with a Vanity Fair magazine cover describing his presidential candidacy with the headline “I want to be in it. Man, I’m born to be in it.” (Proving that Beto and Barack have something else in common — excessive use of the first-person singular pronoun.)

When we throw in Beto’s apologizing for being a product of white privilege, admitting that he has not taken the time to raise his children, equating climate change with the Normandy invasion during the Second World War, and his widely reported general eccentricity (at age 15, he wrote a short story fantasizing about running down and killing children with his car), it appears that his celebrity hook is in need of some early sharpening.

Ah, but there is one Texas-size hook of a question that largely goes unasked and only matters because Beto is from the Lone Star State instead of, say, Montana. Would his presence on the 2020 Democratic ticket help deposit Texas’s 38 electoral votes into the blue column? Is the prospect of that happening the only hook that Beto really needs since it practically guarantees Trump will go down to defeat? Am I silly to think that 38 electoral votes tied to red/blue math explains why Beto’s celebrity aura even exists?

Before I attempt to answer that question let’s take some inventory of the candidate.

The media love him (so far). He won the presidential announcement fundraising contest (so far). He generates news with quotable gaffes (at least until Joe Biden jumps into the race). He looks good in jeans. He sells magazines. Obama sees himself in him.

Let’s stop right there. Could that be the Democrats’ defining feature of a future president? Can you imagine Obama campaigning for Beto in the general election? ObamaBeto-mania could rekindle 2008’s media love affair, and Republicans know how that played out.

Which leads me back to the question with a philosophical answer: If Beto were from Montana, with its three electoral votes, and closely lost a quiet Senate race with only the cattle around to hear, would his gaffes make a sound?

A word to our newsletter subscribers
Next Post
Another Gillibrand staffer accused of sexual misconduct, but this one remained on the payroll