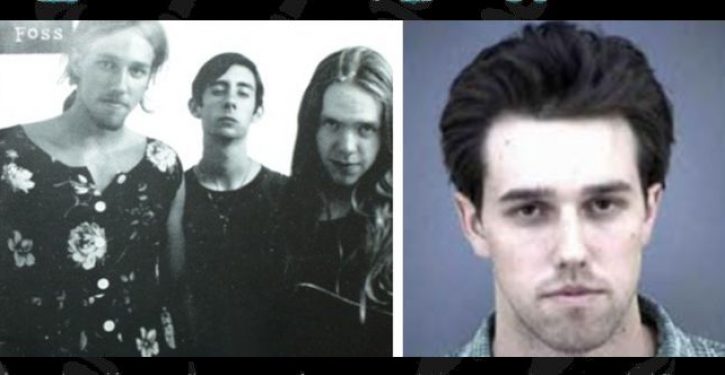 Beto O’Rourke, left, in a photo of his band, Foss. Texas Republicans also tweeted out what appears to be a police mug shot of the Texas Democrat. Handout (Image via Texas GOP Twitter)

Many presidents become authors after their presidencies, writing their memoirs. Beto O’Rourke, who is running for president in 2020, is already an author.

First, the back story as told by Reuters:

While a teenager, O’Rourke … belonged to the oldest group of computer hackers in U.S. history.

Members of the group have protected O’Rourke’s secret for decades, reluctant to compromise his political viability. Now, in a series of interviews, CDC members have acknowledged O’Rourke as one of their own. …

It was as a member of this group that O’Rourke, using the pen name Psychedelic Warlord, wrote a short story titled “Visions From The Last Crusade.” The story, which is a mere 435 words, is worth reading in its entirety, but here are a couple of choice representative excerpts:

My one and only goal in life became the termination of everything that was free and loving. …

This feeling pervaded everything in my life, yet the first few months after realizing my goal, I had done nothing. Then one day, as I was driving home from work, I noticed two children crossing the street. They were happy, happy to be free from their troubles. I knew, however, that this happiness and sense of freedom were much too overwhelming for them. This happiness was mine by right. I had earned it in my dreams. As I neared the young ones, I put all my weight on my right foot, keeping the accelerator pedal on the floor until I heard the crashing of the two children on the hood, and then the sharp cry of pain from one of the two. I was so fascinated for a moment, that when after I had stopped my vehicle, I just sat in a daze, sweet visions filling my head. …

The more people I killed, the longer my dreams were. I soon quit my job, and stayed at my house in an almost comatose state.

Now he wants to be your president.

Bernie Sanders proudly announces his campaign will be unionized: What could go wrong?
Next Post
Kathy Griffin is being blacklisted in Hollywood and she blames Trump