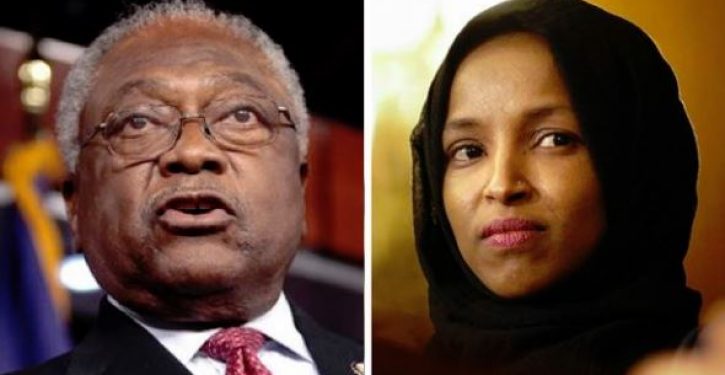 Of all the insulting comments to arise out of the debate over what began as House resolution condemning anti-Semitism and ended up a meaningless condemnation of all “hateful expressions of intolerance,” none was more insensitive or wrong-headed than that of Rep. James Clyburn (D-S.C.), who, The Hill notes, came to Ilhan Omar’s defense:

Her experience, Clyburn argued, is much more empirical — and powerful — than that of people who are generations removed from the Holocaust, Japanese internment camps during World War II and the other violent episodes that have marked history.

“I’m serious about that. There are people who tell me, ‘Well, my parents are Holocaust survivors.’ ‘My parents did this.’ It’s more personal with her,” Clyburn said. “I’ve talked to her, and I can tell you she is living through a lot of pain.”

Her pain may intensify, along with that of all Democrats who voted to pass the watered-down resolution when Jewish voters speak their mind at the polls in 2020. A foretaste of what may come was offered by two Jewish congressmen who voted against the measure. Via The New York Times:

“We are having this debate because of the language of one of our colleagues, language that suggests Jews like me who serve in the United States in Congress and whose father earned a purple heart fighting the Nazis in the Battle of the Bulge, that we are not loyal Americans,” Representative Ted Deutch, Democrat of Florida, said Thursday morning in an emotional speech on the House floor.

“Why are we unable to singularly condemn anti-Semitism?” Mr. Deutch asked. “Why can’t we call it anti-Semitism and show we’ve learned the lessons of history?”

Representative Lee Zeldin of New York, one of two Jewish Republicans in the House, voted no, calling the final resolution “spineless and disgusting,” adding, “If a Republican member was pushing the anti-Semitism that Representative Omar keeps peddling, this resolution would name names.”

A far stronger statement is this one posted to Twitter by New York  State Assemblyman Dov Hikind. The video in it is a collection of comments by Holocaust survivors that squarely answers Clyburn’s claim:

I was deeply moved by the messages from this room of Holocaust survivors’ for @SenSchumer and @SpeakerPelosi that ALL Americans need to hear:

Hold onto @IlhanMN and her antisemitism, lose us! pic.twitter.com/Bn49wbfaK2