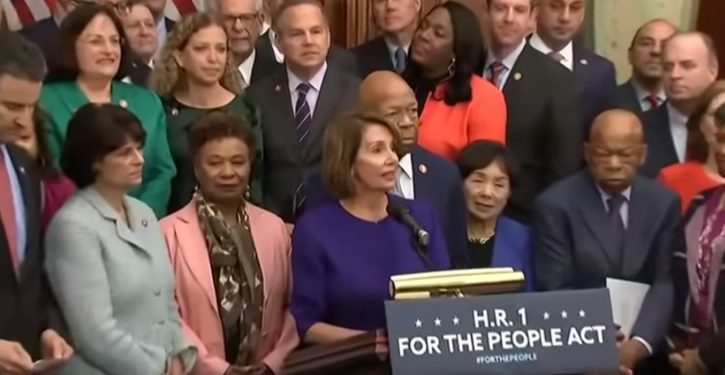 With each hour that passes, the House Democrats’ situation with Rep. Ilhan Omar of Minnesota scrambles to outdo its previous land-speed record.  A short while ago, I saw the point made that we might once have thought it would take some time for the Democratic Party in the U.S. to come to full “Corbynization”; i.e., to reach the level of full-blown, top-level-encouraged anti-Semitism of today’s UK Labour Party under Jeremy Corbyn.  Instead, the thing is done.  Seemingly overnight, the Democrats have breached the firewall.  It’s 7 March 2019, and they’re gone.

Ink is flowing copiously, meanwhile, with explications of how intersectionalism – like that apparently going into the House resolution to condemn “all forms or hate” – will make it harder, not easier, to identify and sanction actual hate.

This thread on the reported development of the House resolution, ongoing as I type, is classic.

Apparently some of the groups who weren’t mentioned as being targets of hate speech — including the Hispanic Caucus — felt left out and want to be added.

Trending: Dementia chronicles: Biden forgets Trump’s name, refers to him as ‘George,’ as in Bush

UPDATE: Dems added language on Latinos, LGBTQ community and Asian Americans and Pacific Islanders as groups who have been targets of hate speech

UPDATE: Dems added language on Latinos, LGBTQ community and Asian Americans and Pacific Islanders as groups who have been targets of hate speech

But the simultaneous scramble of Omar’s apologists to obfuscate the no-kidding anti-Semitism of the things she has said makes it clear: there’s no “will make it harder” about it.  That too is done.

As far as dozens, perhaps hundreds of our elected public officials are concerned, it will now be too hard to just call out the most classic tropes of anti-Semitism when they see them.  The identification of hate will have to be fed through the intersectional filter for validation.  That never comes out favorably for white men (or, up against the wall, for men in general, or whites in general, etc., etc., depending on which angle of the polygon you’re in).  It tends to come out unfavorably for Jews as well.

Thus Rep. James Clyburn (D-SC), explaining that Ilhan Omar’s personal pain, just as valid as that of a Holocaust survivor, is fresher and more immediate.

Top Dem on Omar's experience in refugee camp: "There are people who tell me, ‘Well, my parents are Holocaust survivors.’ ‘My parents did this.’ It’s more personal with her." https://t.co/hX9D5XGCBb pic.twitter.com/mIGG7d4TwV

James Clyburn managed to defend anti-Semitism and dump on the Holocaust and Japanese interment camps all in one interview:https://t.co/2ZHX1cLHqb

As Seth Mandel and Emily Zanotti put it, Clyburn has basically told Holocaust survivors to check their privilege.

Would appreciate if Democrats, in the process of endorsing rancid antisemitism, would refrain from also spitting on my relatives’ graves. https://t.co/8wRC3Jo0Jb

He literally told Holocaust survivors to check their privilege. https://t.co/M3ZeCJk0ld

Just when you think it’s still not quite the last days of Weimar Germany in 1932, you see a Jewish congresswoman assuring the public that she spoke with Rep. Omar, and Omar gave her a personal apology, and she apparently finds it fully satisfactory.  So calm down; everything’s OK.  No one else is going to hear that apology from Omar and assess its worth, but, rest assured, all can go on as before.

Now, it’s not really 1932 all over again.  But that’s mainly because this is America, not Germany.  This is also America and not the EU – which means at the very least that the Corbynization of the Democratic Party will not immediately produce results like America’s police forces ignoring murder, assault, and rape in favor of chasing down social media users to warn them (and even jail them) over their “hateful” language, when that language transgresses the expectations of identity-politics “victim” groups.

It’s this last point that holds the key for the United States.  The Democrats are actually putting us in grave danger, because of something you may not not even be thinking about.  But fortunately, the premises of our Constitution give us a rampart to watch and fight from, with signal advantages.

The unwillingness to acknowledge anti-Semitism when it screams out its presence is certainly a problem.  The way the Democrats are choosing to address it puts us skidding down the slippery slope toward a heavy-handed government policing everyone’s speech.  And that is at least as bad.  But think about how it develops.

After the disgraceful display by white supremacists in Charlottesville in 2017, Trump did what was basically the right thing.  He spoke in terms of the good things we should cherish and believe, and spent little time specifically condemning white supremacism (although he did condemn it).  He didn’t make condemning the speech of a small segment of the people the centerpiece of his public message.

And it isn’t for our public officials, from the president on down, to do that.  Condemning speech from the people is not properly a routine function of government at any level.  Some of the people sometimes make great jackasses of themselves.  But that doesn’t mean there needs to be a government-managed effort to verbally whack the jackassery itself wherever it raises its head.

Constitutional rights must be sacrosanct.  But what governments can do is set an example through policing their behavior, and occasionally, if deemed necessary through great public consensus, choosing not to extend taxpayer-funded privileges of certain kinds to those who persist in despicable speech (which may include behavior).

If the House moved to sanction Omar for her anti-Semitic speech by withdrawing the privilege of a committee seat from her, that would be exactly what the House should do.  Instead, the Democrats are generalizing and diluting the whole proposition, to the extent that condemning speech is quietly transferred in as the premise, rather than taking effective action based on what speech means.

We’ve come to inhabit such a culture of ritual condemnation that we have long forgotten – if we ever knew – that it is not, in fact, proper for the president or the U.S. Congress to rise up and condemn the people.  The moral obligation of our public officials is to affirm good, constructive, positive things themselves, and to make that their standard.

In the clubby precincts of Congress, they’ve actually adhered to that standard – until the last decade – pretty well, about each other and even, in general, about the people.

But our ears have lost their discernment.  What no one has highlighted about Ilhan Omar’s anti-Semitic outbursts is that she, a public official, is lambasting the American people when she makes them.  She’s lambasting American Jews.

The great danger in what the Democrats are doing is that, far from strengthening the barrier against government engaging in such impropriety, the intersectional identity-politics resolution they’re coming up with will burst the dam in short order.  The whole purpose of identity politics is to burst that dam, and have an armed state holding all of us at perpetual risk over our speech and thoughts.

At the moment, this is theoretically about the House of Representatives policing itself.  I’m pretty sure you weren’t thinking of it that way, dear readers; you were thinking of it as something that would apply to all Americans, in whatever faux-legal guise it might begin to ooze around us like a toxic fog growing at our feet.  But as it stands now, the resolution’s ostensible purpose is to establish the sense of the House as to what is unacceptable and intolerable in terms of members’ speech.

Getting that model in play, however, is driving a Trojan horse into the heart of American government.  It will be no leap at all from rebuking members of Congress for their speech to formally, ritually rebuking members of the American public – with debate, by vote, from the floor of the U.S. House on Capitol Hill.

That is intolerable.  It must not happen.  If it does, we will, in very truth, be Stalin’s Soviet Union.

The good news is that we have a well-founded hope that it will not destroy America.  Those prosaic, often-ridiculed features of American government – being limited, being constitutional, being federal, having built into it checks and balances among different branches – give us a way to save the Republic.

What stands now between us and “Nazi Germany 1938” is the president, the U.S. Senate, the Electoral College, and the 50 states.  The Supreme Court is important, but it alone cannot save us with good decisions.  There must be a bigger systemic brake on mob madness in the House.

And at the moment, there is.  I urge you, do not take this lightly.  We must not give up the basis of representation in the Senate – two senators per state – or the purpose of the Electoral College, which is to empower the states, as states, in national decision-making.  The states are our organized vehicle for opposing mob surges against the Constitution and our rights as enshrined in it.

The great majority of Americans who truly despise anti-Semitism and other forms of targeted hatred need the existing republican structure to face down radical mob surges masquerading as “majorities.”  If we don’t ensure that that structure remains intact – well, the days we’re living through should teach us that it will be no time at all before we ourselves are being judged by identity-politics tribunals.

The House Democrats are busy setting such a tribunal up for themselves.  America doesn’t have to be destroyed by it.  The Senate and the president will not let it overstep the boundaries of the House chamber, at least for now.  But sadly – and I truly mean sadly; this is a terrible thing – the Democratic Party will be destroyed by it.  I suggest we all pay close attention, and never forget the lessons we will learn.

Ethics group to file House complaint on Ocasio-Cortez’s Twitter use
Next Post
Top Dem to Holocaust survivors: Check your privilege 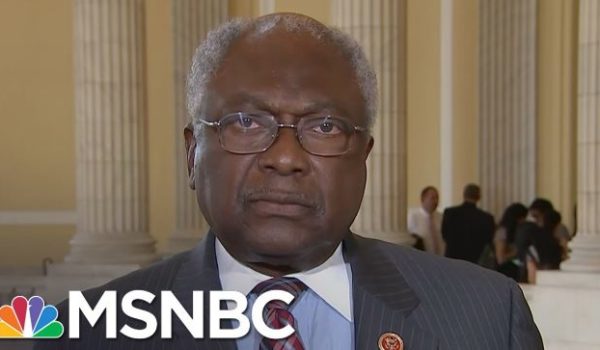 Insisting Hunter Biden laptop is fake is a trap. So is insisting that it’s real

No matter who wins the U.S. election, the world’s ‘fake news’ problem is here to stay

Will Trump’s running as an outsider play as well at the polls as it did in 2016?

San Francisco: A string of drugstores close after shoplifters strip the shelves bare