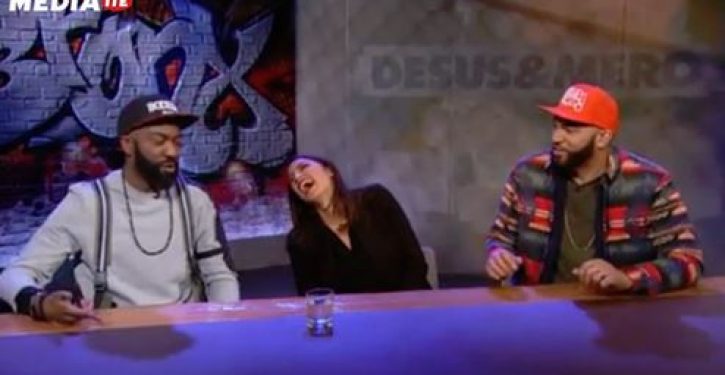 As noted here, Alexandria Ocasio-Cortez was a guest on the premiere of Showtime’s new late night talk show, Desus & Mero. To give you some idea of the level of the company she keeps, she was asked at one point to “look straight to the camera and explain the tax sh*t for the dumb mother f*ckers that keep saying, ‘If I make a million dollars, she’s going to take seventy millions away from me.’” Unfazed by the gratuitously profane manner in which the question was presented, Ocasio-Cortez went off into a gesture-filled explanation of marginal tax rates for (and by) dummies.

But the highlight of the segment is her disquisition on her Green New Deal. At 20:29 in the video that follows, she pontificates:

In the deal, what we talk about — and it’s true — is that we need to take a look at factory farming, you know? Period. It’s wild. And so it’s not to say you get rid of agriculture. It’s not to say we’re gonna force everybody to go vegan or anything crazy like that. But it’s to say, ‘Listen, we gotta address factory farming. Maybe we shouldn’t be eating a hamburger for breakfast, lunch, and dinner. Like, let’s keep it real. [Emphasis added]

If she wants to “keep it real,” she should be aware that Americans — likely including the ones who voted for her — dislike being told what to do and what to think. This goes double for eating habits. We saw the backlash to Michelle Obama’s disastrous school lunch program. Ocasio-Cortez, who has been in Congress for all of two months, may believe that her job is to “force everybody” to do her bidding, but the sooner she relinquishes this delusion, the better off she — and the nation she was elected to serve — will be.