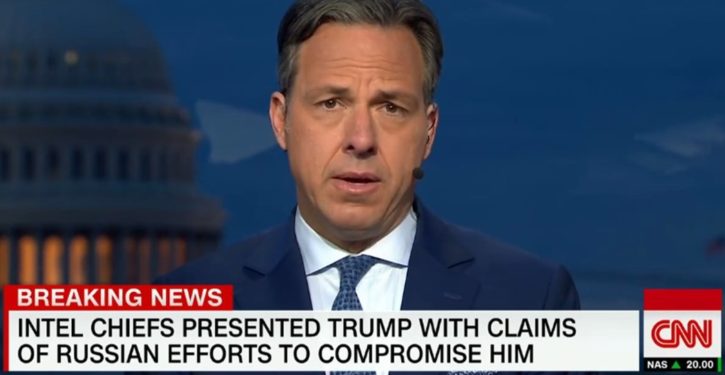 Liberty Unyielding carried Chuck Ross’s DCNF report earlier on emails showing that CNN’s Jake Tapper was angry when BuzzFeed published the Steele dossier in January 2017.  The emails were obtained during a lawsuit against BuzzFeed brought by a Russian company named in the dossier.

The specific rebuke issued by Jake Tapper is a telling one.

“I think your move makes the story less serious and credible[.] I think you damaged its impact,” Tapper wrote to [BuzzFeed editor Ben] Smith on Jan. 10, 2017, just after BuzzFeed published the dossier in full on its website.

It’s also significant that Tapper made it clear CNN knew the official source of the dossier was Christopher Steele.

“Collegiality wise it was you stepping on my dick,” Tapper responded [to Smith].

“You could have waited til morning,” he said.

“Professionally this is unverified info[.] Your guys unlike us don’t even seem to know who the former agent i[s],” added Tapper, seemingly referring to Christopher Steele, the former British spy who wrote the dossier.

Later disclosures would indicate that CNN got the dossier details from then-DNI James Clapper, who became a paid CNN contributor after leaving his job in the Obama administration.

CNN, in other words, knew what was in the dossier, knew its purported origins, and had been in contact with Clapper – who was part of the briefing team that told Trump about it – before making the CNN report on the brief to Trump.

Moreover, CNN would have known that other outlets had information from the dossier. They had to assume others had the dossier itself.  Information identical to what was in the dossier had been reported as early as September 2016 by Michael Isikoff of Yahoo News and David Corn of Mother Jones.  It appears to have been an open secret that Fusion GPS and Christopher Steele were shopping the dossier to news organizations throughout the latter half of 2016.

All that is to say that the dossier wasn’t the scoop.  It wasn’t the “impact” bombshell Tapper and CNN were looking for in that first story.

The impact bombshell was the report that Trump was briefed on the dossier by senior officials of the Obama administration.  (And note that for that to have a news impact, nothing in the dossier itself had to be verified.)

It’s important to understand the distinction here, because it’s the key to the whole Russiagate illusion.  Picking the point of impact requires holding back some of the information.  In the case of briefing Trump on the dossier, CNN could keep the brief sounding more significant and portentous than it was – if the dossier itself wasn’t out there in all its glory for public inspection.

It sounds grave and meaningful, to hear that the highest officials in the land have gone to brief the president-elect on potentially damaging information about him compiled by the experienced intelligence operative of an American ally.

It sounds like a big scoop, and audiences can be kept on tenterhooks about what it means if they know less than the news organization does about what’s in the dossier.

The ability to then roll out the dossier for maximum effect is important for any campaign to ding Trump’s public image.

But it definitely lets the air out of your balloon if some JV squad comes along and publishes your “potentially damaging information,” before you’ve mined all the benefit from keeping it behind a curtain.

You’ve lost the advantage of mystery, once everyone can see what your super-secret information is.  In the Steele dossier’s case, the adjective best fitting it continues to be “asinine.”  You don’t read the Steele dossier and think, “Wow” – at least not in a good way.  You read through it and think, “The DNI actually briefed Trump on that?”

Once you’ve seen the dossier, you go from 60 to zero in an instant on how impressive it is that Obama officials wanted to brief Trump on it.  If your brow furrows, it’s because you’re asking yourself what their motives were.

That’s the opposite of the impact Tapper and CNN wanted to have.  Their report’s purpose was to create an implication about Trump: that if these very senior officials were briefing him on potentially damaging information, it must be pretty serious.

As a rule in the Russiagate drama, leveling the information playing field – seeing previously hidden information disclosed to the public – keeps undermining the implications about Trump that can only thrive, so to speak, in darkness.

Tapper’s angry rebuke of BuzzFeed wasn’t so much about Tapper being petty as about CNN wanting to manage information.  The goal was to have – Tapper’s word – an impact, in this case on Trump’s image with the public.  Don’t forget that.  It explains a lot, and it’s always in operation.