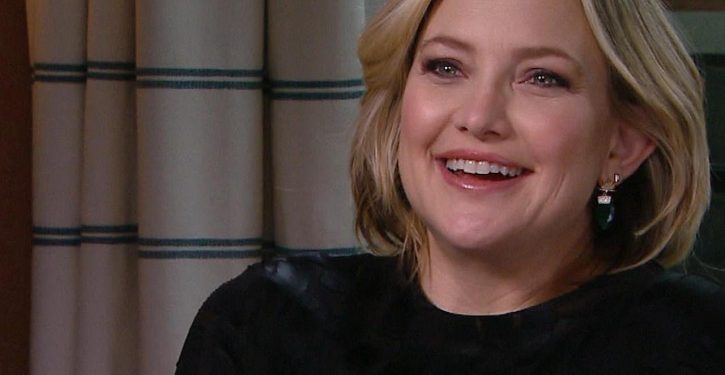 Actress Kate Hudson is the latest celebrity to play the game “What’s my child’s gender?” In an interview with AOL, Hudson, who has raised two boys, was asked whether having a baby girl will cause her to do anything differently or change her approach to child-rearing. Her response:

It doesn’t really change my approach, but there’s definitely a difference. I think you just raise your kids individually regardless — like a genderless [sic]. We still don’t know what she’s going to identify as.

Unfortunately for and every liberal who subscribes to the popular misapprehension that human beings are sexual tabulae rasae — blank slates to be filled in at some later date by the body’s owner or his or her parent — nature has a different plan. According to a study published in 2012 in the journal “Hormones and Behavior,” children by age 1 show clear preferences for gender-consistent toys: Boys prefer to play with trucks, for example, while girls are happier playing with dolls. This occurs even if the child has been exposed to gender-neutral toys or given equal access to both “boy’s” and “girl’s” toys.

By age three, children have developed a basic gender identity that explains why they prefer to play with peers of the same sex and engage in gender-stereotyped play. This was first documented in 1984 in the journal “Child Development,” and no study has emerged since to disprove the hypothesis.

Like other liberals, Kate Hudson may have fallen for the stories of, for example, male children preferring to wear dresses, which purportedly shows transgender tendencies. But this assumption is belied by the fact that young children engage in all sorts of fantasy play — including dressing up in someone else’s clothing. It is only when parents promote — or, worse yet, insist on — the continuance of this behavior that children become confused about their sex.

In 2016, Ilhan Omar asked judge for ‘compassion’ in sentencing 9 Muslims who planned to join ISIS
Next Post
Why Trump’s immigration compromise is a shrewd move

Not clear why some 7,000 troops will stay in D.C., but you’ll love this discussion point