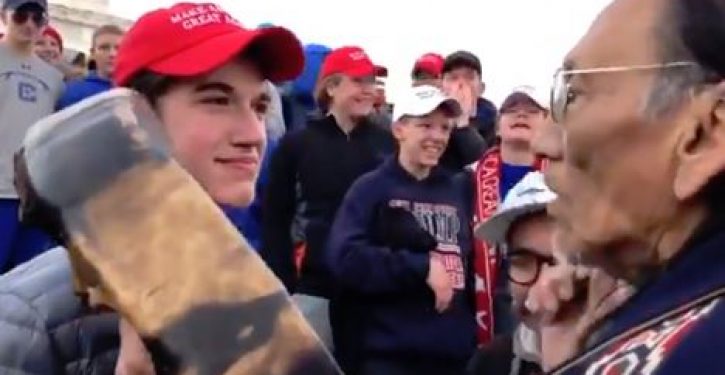 Once again, the liberal media have jumped to a wrong conclusion based on their preconceived notions of who Donald Trump supporters are and who members of their protected classes aren’t.

At the NPR website, you will find the story that was published at 10:56 today with no correction or rebuilding of any sort. The headline reads as it did then “Video Of Kentucky Students Mocking Native American Man Draws Outcry.”

The same version of events continues to be served up by NBC News, CBS News, and other sources. Twitchy reports that Elizabeth Warren, who you’d think had dabbled enough in Indian affairs, posted a tweet:

Omaha elder and Vietnam War veteran Nathan Phillips endured hateful taunts with dignity and strength, then urged us all to do better.

Listen to his words: https://t.co/ymHRxVA91K

So what happened according to these outlets? Here’s NPR:

A crowd of students surrounds the Native American man, laughing and filming on cell phones. One boy, wearing a red Make America Great Again hat, stands just inches away from the man’s drum, staring at him with a wide smile.

The jeers of the students – and Phillips’ stoic response – were captured in a video that has sparked widespread criticism and drawn apologies from a Kentucky prep school and diocese.

As a bonus, as though one were needed, the students all attend Covington Catholic, a school on the Kentucky side of the Kentucky-Ohio border: a chance for the Left to tear once again into evil Christians.

So what really happened? The Cincinnati Enquirer, which had originally joined the chorus demanding the kids’ heads, has since recanted. Here is their updated account of what went down:

After short clips of an incident between students at Covington Catholic and a man at the Indigenous Peoples March in Washington D.C. went viral, people are now sharing full-length clips of the incident.

People across social media have responded to the video saying that it shows that the students were provoked and that the man put himself in that position.

The indigenous man, Nathan Phillips, said he stepped in to diffuse the incident. …

Here’s a longer version of the video:

The students, who were in D.C. incidentally to participate in the March for Life, tell a still different version of what transpired — one in which Nathan Phillips hostilely insinuated himself among them as they waited for the bus home because he disapproved of their hats.

Here’s the student’s version (which matches the ENTIRE video):https://t.co/AEWON1muWC

When the dust finally settles, one student who is said to face expulsion will likely (hopefully?) be exonerated. But will the many shrieking voices on the Left admit their error?

Don’t count on it.

Pelosi has gone ‘all in’ on gov’t shutdown: Will her gamble pay off?
Next Post
Don’t bet on Beto: Liberal knives come out for O’Rourke