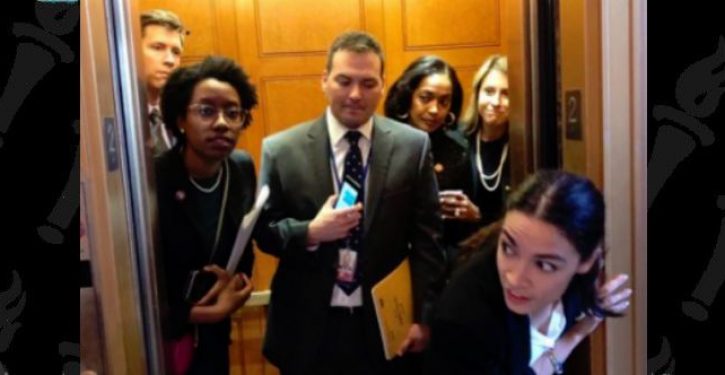 It’s beginning to look like Alexandra Ocasio-Cortez can’t do much of anything right. That includes navigating her way around the Capitol. She and a group of her freshman buddies attempted to descend on Senate Majority Leader Mitch McConnell in his office Wednesday in the hopes of pressuring him to vote to reopen the government without border wall funding. The only problem is they went to the wrong office.

The stunt – dubbed #WheresMitch on social media – came to an unceremonious and anti-climactic end after the pack first went to the wrong office of McConnell, then delivered the letter to his chief of staff, and ultimately declined to stake out the Senate floor.

800,000 workers are missing their paychecks and we’re pushing to get them paid ASAP.

We’re here doing our job – the House has voted to reopen government whole or in part several times – so why can’t we find GOP Senators to ask them do theirs? #WheresMitch pic.twitter.com/FogCPg6ayZ

The group of Democrats, which included Michigan Rep. Rashida Tlaib, California Rep. Katie Hill, and Illinois Rep. Lauren Underwood, carried a letter – reportedly signed by over 30 House freshmen – urging McConnell to reopen the government and bring the House-approved funding package to a vote in the Senate.

The fun begins at 0:16 in the video that follows.

The group first tried McConnell’s personal office in the Russell Senate Office Building but soon learned he doesn’t work there. Next they tried his office in the Capitol, which got them closer but no cigar: The hapless newbies were greeted by the senator’s chief of staff, Don Stewart, who said he’d deliver the letter to his boss.

Ultimately Ocasio-Cortez concluded that McConnell was ducking them, prompting her to write on  Instagram, “He’s running away from us – so we’re leaving our letter everywhere he’ll be. Where’s Mitch? … You can run but you can’t hide!”

Bear in mind that this genius will be receiving a salary in the amount of $174,000 ponied up by taxpayers.