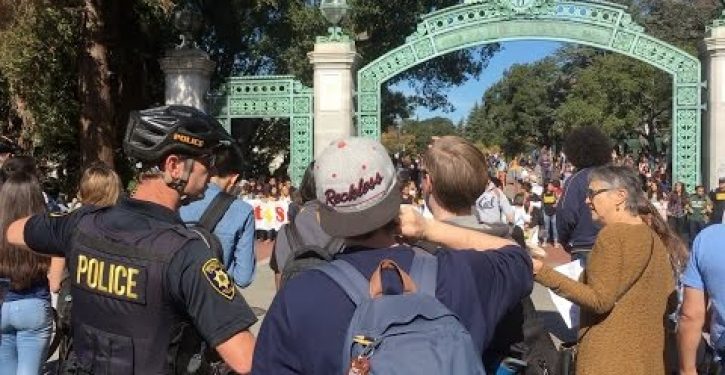 UC Berkeley students wanted to make a point about the importance of safe spaces on campus. And what could make the campus of any university safer than converting it into a hostile environment for white students by blocking their access?

Actually, if you read the full report at the Washington Times, you discover that the protest was never meant to include white students. Which is not to say the event wasn’t inclusive, to borrow one the popular battle cries of social justice warriors. Except in this case, the only groups included were transgender and nonwhite students.

The demonstrators were caught on video [forming a human chain] blocking Berkeley’s Sather Gate, holding large banners advocating the creation of physical spaces segregated by race and gender identity, including one that read “Fight 4 Spaces of Color.”

Protesters can be heard shouting “Go around!” to white students who attempt to go through the blockade, while students of color are greeted with calls of “Let him through!”

The aforementioned video appears below and is well worth watching if for no other reason that to count the number of white faces among the protesters. To me it appears that most of them are white, and presumably self-hating.

Who else but Berkeley progressives could find a way to demonstrate in favor of segregation on campus. Martin Luther King Jr. has to be rolling in his grave.