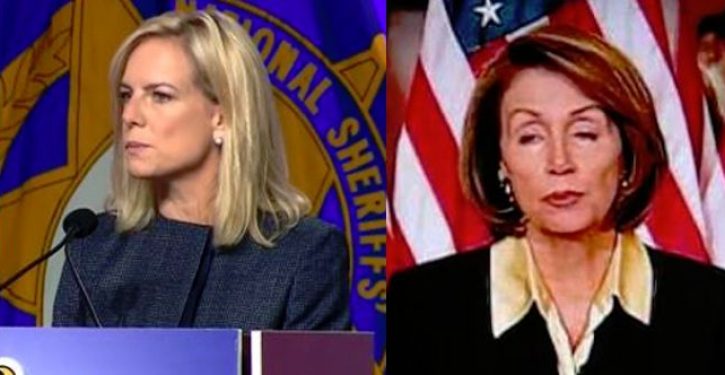 Nielsen was conducting a presentation regarding the nation’s security and the threat of illegal immigration when the top Democrat made a declaration rejecting the facts.

The exchange highlights how the administration is interested in dealing with the reality of the threat at the border, while the party of resistance has no interest in truth.

According to the Wall Street Journal, Nielsen was running off statistics regarding the border and the criminal threat attempting to enter the United States – including those associated with terrorism – when Pelosi interrupted. “These aren’t my facts,” Nielsen fired back. “These are the facts.”

Democrats always talk about “their truth” and “your facts.” Imagine if they could understand that there is only one truth, only one set of facts. They may hate that truth and fear those facts, but they will eventually have to learn that facts are facts. https://t.co/JScHuUOFpi

Didn’t Want to Hear About the Terror Threat

The biggest point of contention for Pelosi and the Democrats seems to be an unwillingness to accept the fact that terrorists with evil intent for American citizens may be trying to enter the country.

But Sen. Dick Durbin reacted to Nielsen’s analysis afterward as “not a credible presentation. It was preposterous,” he charged. “At a time when we have the lowest level of apprehensions at the border … she is saying that we have all these terrorists and criminals and all these people on their way in.”

This past October, a Univision reporter confirmed that the caravan trying to breach the U.S.-Mexico border contained “unknown Middle Easterners” including “people from Bangladesh.”

Bangladesh has been a hotbed of terrorist activity, and criminals coming in from the country should be of concern to Americans – Democrat and Republican alike.

The bulk of the migrant caravan, however, consisted of individuals from Honduras, Guatemala, and Mexico. Guatemala is another significant terrorist concern.

Guatemala President Jimmy Morales claimed that his administration had captured “close to 100 people completely linked to terrorist issues, with ISIS,” within days of the caravan reaching Mexico.  Additionally, a suspect in a 1987 bombing that wounded six American soldiers in Honduras had led another migrant caravan demanding entry into the U.S. or payments of $50,000 to each would be illegal.

Democrats would do well to listen to Nielsen, who has a breadth of facts at her hand. Otherwise the next loss of American life at the hands of an illegal alien will be blood on their hands. Rejecting facts isn’t going to make the reality of the terrorist or criminal threat simply disappear.