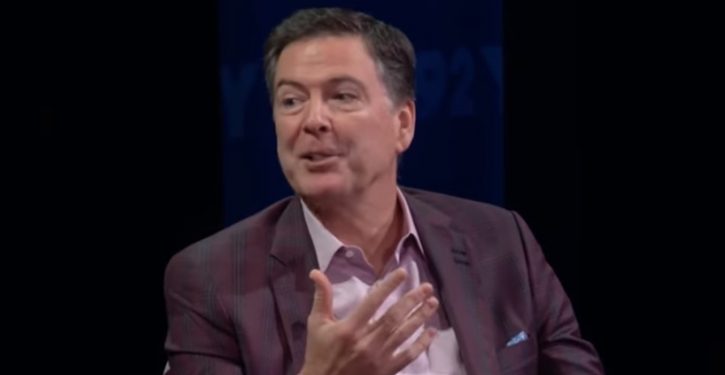 Ambushing for fun and profit. Comey is interviewed by Nicolle Wallace at the 92nd St Y in NYC. YouTube

Former FBI Director James Comey sat down for an informal interview with MSNBC’s Nicolle Wallace on Sunday night (9 December) at the 92nd Street Y in New York City, and said some remarkable things.  (Video below.)  One of them was that, with another administration, he wouldn’t have tried the ambush interview of Michael Flynn for which Agents Strzok and Pientka were dispatched on 24 January 2017.

It’s not clear if he would try something similar with the Trump administration now.  In the exchange with Wallace, Comey seemed to be trying to score a point – something about the Trump administration not having enough “process” – while also congratulating himself for catching a new presidential team unawares.  Perhaps Team Trump has more process now, in which case the passage about lack of it is cheap, throw-away rhetoric.

The whole Flynn-interview interlude starts at the 12:50 mark.  A transcript of the relevant passage is below (it starts at 14:33).  Underlining added.

Nicolle Wallace: You look at this White House now and it’s hard to imagine two FBI agents ending up in the Sit Room [White House Situation Room; i.e., to question Flynn]. How did that happen?

James Comey: I sent them. [Laughter from the audience]

And in both of those administrations there was process.  And so, if the FBI wanted to send agents into the White House itself to interview a senior official, you would work through the White House counsel, and there’d be discussions, and approvals, and it would be there… and I thought, it’s early enough, let’s just send a couple of guys over. [Audience laughter]

And so, we placed a call to Flynn, said, “Oh, hey, we’re sending a couple of guys over…uhh…hope you’ll walk to them.”  He said, “Sure”… Nobody else was there.  They interviewed him in a conference room at the White House Situation Room, and he lied to them.  And that’s what he’s now pled guilty to.”

Wallace: What did he think they were coming over there for?

Comey: Uh, I don’t think he knew. … I…no, we didn’t tell him.  Just said, “We’re sending over a couple of agents, they want to ask you some questions” – I didn’t have this conversation, my deputy director did – but, “hope you’ve got a few minutes, you can sit down and talk to them.”  And he said, “Sure.”

The impression that Comey is proud of ambushing Flynn is inescapable.  What’s remarkable about it, at the very least, is that Comey is so clearly describing an ambush, and seems to have no fear of exposing his operation of the FBI in that manner.

That’s not the only remarkable thing he said in the interview.  Just before answering Wallace’s question about how two agents got into the Sit Room to question Flynn, Comey takes her through how, according to him, Flynn “came to their attention.”

Comey: …he came to our attention in the early part of January when there were statements made by the vice president [i.e., the vice president-elect, Mike Pence] in public about interactions that Flynn, as the national security adviser designee, had had with the Russians, and we knew those representations were very different than what the facts were, given that we already had a case open to understand whether any Americans were working with the Russians as part of their effort to undermine our democracy… Trying to figure out what was going on there was very important to us.

Actually, Flynn had “come to their attention” months before, when they began investigating his presence at the Russia Today dinner in 2015 as part of Operation Crossfire Hurricane, and then switched to investigating his intelligence firm, which was doing work for the Turkish government, but without having filed FARA paperwork.

This Twitter thread has a timeline and links on those and other activities the Obama administration agencies had been tracking.

Let's hammer this point home with a thread. pic.twitter.com/Sm07IXCju1

Moreover, as soon as the FISA warrant was obtained on Carter Page, in October 2016, Flynn’s communications would have been subject to FBI monitoring under the “two-hop” rule.

And those are just the Flynn-tracking activities we know about.  None of it is an indictment of Flynn; Bill Clinton had dinner with high-ranking Russians at conferences too, and Tony Podesta lobbied for foreign clients without filing FARA paperwork, and the Obama administration had connections to Turkish businessmen, and presidential transition teams invariably meet with foreign dignitaries during transitions, and incoming national security advisers participate in such meetings, as well as have phone conversations with foreign ambassadors on significant topics.  Keep in mind, moreover, that the FBI and Mueller both picked apart everything they could find on Flynn, and found nothing to charge him with except the count of giving false information in the ambush interview.

I wouldn’t expect Comey to go into detail on this background with Wallace in an informal interview setting.  But it’s disingenuous to represent when Flynn “came to the FBI’s attention” as if it wasn’t until Mike Pence said something on a Sunday morning news show that seemed to conflict with what the FBI had recordings of Flynn doing.  “Disingenuous” here being another word for “simply not true.”

One more remarkable thing said by Comey.  For the sense of it, there is no substitute for listening to Comey’s whole series of responses between 12:50 and 16:35 in the video.  Comey’s meaning appears repeatedly to be that, at the time of the interview with Flynn – or, by implication, immediately after it – it was “clear” that Flynn was lying.  Comey says this several times.

Yet Comey testified to Congress twice in March 2017 that his agents had said Flynn showed no deception in the 24 January 2017 interview.  Although we don’t have transcribed words from one of those events, we have them from the other, and the wording doesn’t indicate that Comey conveyed to Congress a conviction that Flynn had been lying.

[T]he agents…discerned no physical indications of deception.  They didn’t see any change in posture, in tone, in inflection.  They saw nothing that indicated to them that he knew he was lying to them.

After Flynn took a plea on 1 December 2017, Andrew McCabe “refined” this assessment to suggest that the FBI’s position was as follows: Flynn had to be lying, since they had recordings of what he and Kislyak said, but he didn’t seem to show consciousness of lying.  (See link above.)

However, that’s not what members of Congress thought they were hearing from Comey in March 2017.  That helps explain why the evidence of potentially altered interview documents on Flynn has been of such concern to both the Senate and the House (again, see link above), and why Chuck Grassley has pressed DOJ hard for so many months to disclose those documents.

The Federalist’s Margot Cleveland has an excellent summary of the case that there are probably altered interview documents on Flynn, including the form 302.  As with the “evolution” over time of Comey’s account, there are past, documented events that don’t jive with what was said later, or is being said now.  There doesn’t seem to be an attempt to make it coherent.  It just changes, and moves on, without accountability.  May as few of us as possible be ambushed for FBI interviews in such conditions.

DOJ IG: Mueller team wiped Strzok, Page phones before their contents could be reviewed
Next Post
What matters about Russian Maria Butina pleading guilty to a conspiracy count