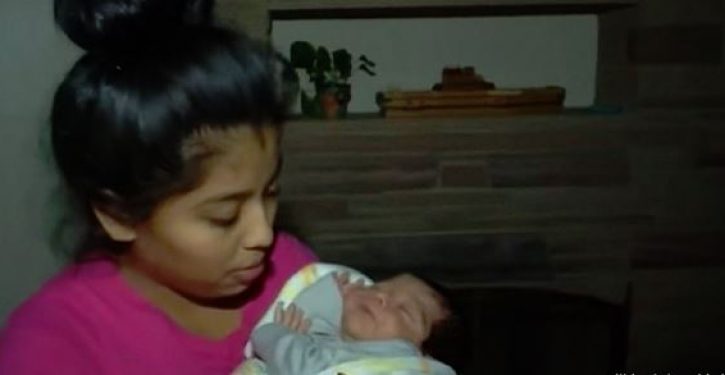 Nineteen-year-old Maryury Elizabeth Serrano-Hernandez, a Hondruan woman who made the grueling 2,000-mile trek to the U.S. border with her husband and three-year-old in tow, wasn’t about to miss out on what she called the “big reward”: having a baby on American soil.

But when the family reached Tijuana a month after they set out on their journey, they found that thousands of Central Americans had had the same idea before them. With U.S. inspectors processing only about 100 asylum claims daily, Serrano-Hernandez — who was eight months pregnant — wasn’t about to wait her turn. Somehow she managed to scale the border wall — no doubt at risk to her baby — and entered the U.S. illegally with her son and husband.

Where they were promptly intercepted by three agents with U.S. Customs and Border Patrol who wanted them returned to Tijuana. Then providence struck. Serrano-Hernandez, whose motto had always been “With the faith in God, my son will be born in America,” went into labor. According to Fox News, border patrol agents transported her to a San Diego hospital, where she gave birth.

So did they all live happily ever after? Not according to the missus, who says was made to feel “like a criminal.” Which, quite obviously, is what she was.

Her husband claims immigration officials, who stood guard outside the hospital room, closed all the windows and tried placing handcuffs on the new mother moments after giving birth. They also inspected food brought in by nurses and monitored people entering and exiting the room.

Incidents like this are sure to rekindle the debate over “anchor babies,” which reached a fever pitch in October, when President Trump threatened to to end birthright citizenship via executive order. Births to illegal aliens in the U.S. have declined since 2007, but as of 2016 there were still a quarter million such births occurring within our borders.

For Democrats, these births translate to future likely voters. To American taxpayers, who shell out $89 billion a year on illegal immigration, they translate to a burden.