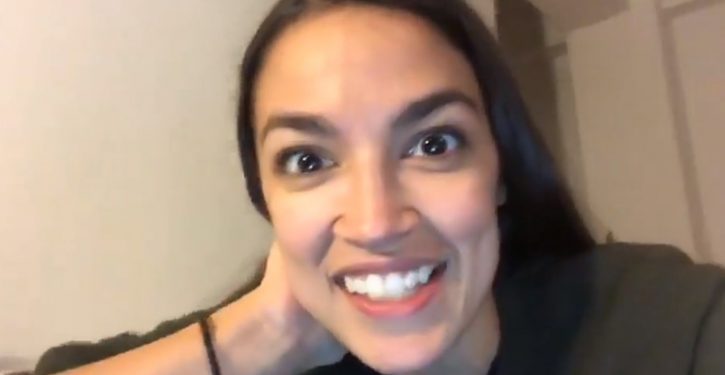 One small step for a ditz. One infinitely smaller step for mankind.

Self-proclaimed socialist Alexandria Ocasio-Cortez, who never runs out of comparisons (she recently equated the migrant caravan with Jews fleeing Nazi Germany and last July she equated the act of electing Democrats to the freeing of the slaves), compared her own election to the moon landing on Friday.

The occasion was a “Sunrise Movement” press conference in preparation for which her speech writers tried to make her sound eloquent, but all was in vain. Here’s an example from the video that follows:

When our country has reached the depths of darkness, in every moment when we were at the brink — the cusp — of an abyss and we did not know if we would be capable of saving ourselves, we have. We’ve done it. We’ve dug deep and we’ve done what we thought was impossible. We went to the moon. …

I don’t seem to recall the abyss America was facing in the period prior to the moon landing, but no matter. The entire speech is pure piffle. Ocasio-Cortez didn’t win a seat in Congress thanks to her intestinal fortitude in the face of grave obstacles. Her accomplishment, if it can be called that, was beating an incumbent in a district with virtually no Republican presence or viable opponent to oppose her candidacy.

Even in her primary election against [Democratic incumbent Joe] Crowley, less than 16,000 people voted for the Democratic Socialist, out of total 27,744 ballots, despite the district having hundreds of thousands of registered Democrats.

Justice Democrats, a left-wing group that spearheaded Ocasio-Cortez and other progressives’ candidacies, despite the claims of their takeover of Congress, managed to elect in total four non-incumbent Democrats in already safe blue seats.

None of the candidates endorsed by the group flipped a seat from Republicans.