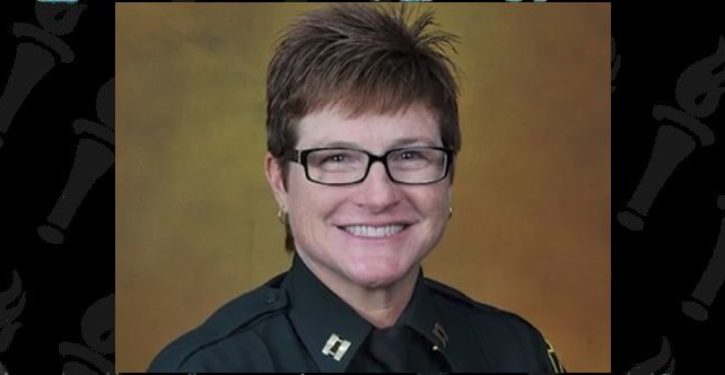 Last week, Capt. Jan Jordan resigned from the Broward County Sheriff’s Department. Jordan, should the name fail to ring a bell, was the officer in charge during the during the Parkland shootings. It was Jordan who ordered first responders to “stage” — or form a “perimeter” — outside Marjory Stoneman Douglas on Feb. 14, rather than rush into the building.

Jordan was criticized last week during public safety hearings into the response to the shooting. She was also recently named in a lawsuit filed by Parkland, Florida, parents and students against the county and members of the sheriff’s office.

During the hearing, embattled Sheriff Scott Israel spoke about the decision to hire Jordan in 2013. In the following video, tweeted out by Andrew Pollack, whose daughter died in the massacre, Israel describes the genesis of the hiring (which he refers to incorrectly as etymology), specifically noting that diversity played a role in it.

Captain Jan Jordan froze during the Parkland shooting. Officers said she was in over her head.

Now Sheriff Israel admits Captain Jordan was recommended based on “diversity” NOT qualifications.

Her lack of leadership led to kids dying, all because they wanted diversity! pic.twitter.com/oEB93ABF8E

While Pollack’s reaction, which is clearly driven by raw emotion, may be a little too on the nose, it does raise the trenchant question “What price diversity?” While I am willing to stipulate that a man in Jordan’s position may have made the same wrong-headed call even as the sound of gunfire rang out from inside the building, I strongly believe that the manic need of the Left to include diversity in every decision can lead to unintended consequences — and may have done so in this instance.

Obama: America has a ‘great smugness’ about wealth, status
Next Post
Cartoon of the Day: Media rock stars