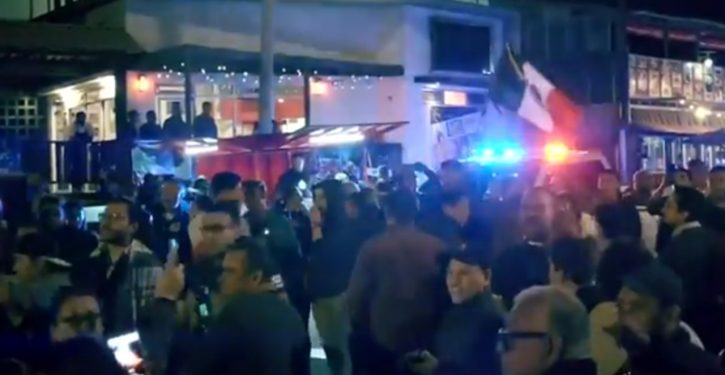 Members of the first migrant caravan from Central America continue to arrive in Tijuana, and their increasing numbers have Mexican locals on edge.  On Thursday night, about 300 residents of Tijuana came out to protest the activities of migrants coming into their neighborhood.  A confrontation between the migrants and residents turned violent when some of the migrants, according to on-scene reports, began throwing rocks.

The Tijuana residents have reason for concern, as it is not clear what will happen with the migrants.  Local authorities have set up shelters for them, but many of the migrants — young men in particular — are refusing to use the shelters.

A few migrants have tried scaling the fence into the U.S., and have been promptly arrested by the U.S. Border Patrol, which vows to keep the border secure against illegal entry.  The Mexican government’s response has so far been a mix of good-faith efforts to winnow down the caravan, by offering asylum and assistance in Mexico, and arrangements to move the migrants along through the country toward the U.S. border.

The U.S. has been emphasizing via social media and other outreaches that there are nine consulate facilities in Mexico where the migrants can apply for entry, on an asylum basis or otherwise, and that participants in the caravan should avail themselves of that method rather than attempting illegal entry.

Moreover, President Trump approved an order last week restricting asylum processing to persons who cross at designated points of entry.  Illegal border crossers can’t turn themselves in and request asylum outside those points of entry.  Tijuana is one of the designated points of entry, and it is unclear whether the nearly 2,000 migrants who have already arrived there intend to apply for asylum in the orderly and approved manner.  So far, the news has focused on the attempts of some migrants to cross illegally.

There is reason to suspect that caravan members could choose not to present themselves at ports of entry, and opt instead for proving a political point with illegal crossings.  Several new-media investigators have traveled with the caravan to learn ground truth about it, and one of the most recent reports confirmed that the presence in it of Pueblo Sin Fronteras (People Without Borders) is pervasive.  The far-left activist group is playing a key organizing role, as it has for a decade in ginning up previous, smaller caravans.

New video! I went to Mexico and embedded with the migrant caravan. Check it out and see the truth about what is going on. @RealDeanCain @dbongino @therealroseanne @benshapiro @realDonaldTrump #MigrantCaravan #FoxNews #CNN #Immigration pic.twitter.com/vmvrJH20V7

Pueblo Sin Fronteras has an avowed goal of invalidating and erasing national borders — starting with the U.S. border.  It’s possible that the Trump administration’s deterrent posture at the border will cause the approaching caravans to lose motivation and political steam.  They could largely dissipate, faced with little prospect of success in demonstrating the point Pueblo Sin Fronteras wants to prove.  But the caravans, composed mostly of young men, may instead try a mass, overwhelming push somewhere, urged on by the radical organizers.

There’s evidence that the organizers have a goal of taking “collective action.”  The founder of Pueblo Sin Fronteras, Irineo Mujica, is in Tijuana with the migrants, and has been encouraging them to stay away from the shelters provided by the local authorities.  He wants them to remain on the beaches, where many of them first opted to stay. (The locals are not happy about that — one of the reasons they are protesting.)  This passage is from the MSN.com link at the top:

As the conflict intensified, Irineo Mujica, an immigrant activist who helps organize migrant caravans, said the migrants still at the beach – and the ones en route to Tijuana – wouldn’t go to the shelters. He referred to them as “jails” with strict curfews. He said he was concerned that non-governmental organizations wouldn’t be allowed into the shelters, making it harder for the migrants to remain organized as one collective.

“For this reason – because this is oppression – we prefer to be in the streets, in the cold, rather than in a jail,” Mujica said.

If the migrants continue to sit in Tijuana, with no evidence that they are seeking asylum at the point of entry, the questions about what they’re really there for will remain. Tensions with the locals are likely to increase.  Reportedly, the Mexicans in Tijuana have shouted “Primero Mexico!” (Mexico first!) in confrontations with the migrants and the harassed local authorities trying to figure out what to do with them.

Others sang the Mexican national anthem and waved their flag.

New reports suggest that most of the first caravan will get to the U.S. border by early next week.