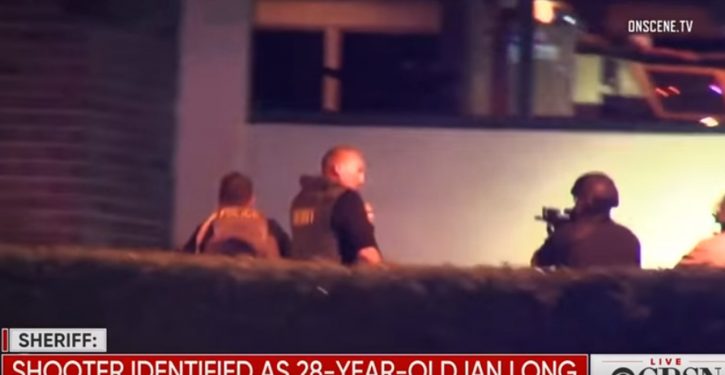 Our hearts go out, once again, to the victims of a horrible mass shooting, this one at the Borderline bar and club in Thousand Oaks, California, northwest of Los Angeles in Ventura County.

It was college night at the Borderline, and most of the victims were college-age kids, from schools like California Lutheran and Pepperdine.  At least one club guard was shot, along with the female cashier and greeter at the door.

As reported earlier, Sgt. Ron Helus of the Ventura County Sheriff’s Department was killed when he responded at the scene.  The names of the other victims have not been released yet.

The shooter, now dead, was 28-year-old Ian David Long of nearby Newbury Park.  He was a Marine Corps veteran, originally from the area, who according to neighbors suffered from PTSD.  The Ventura County sheriff briefed earlier that deputies had responded to a disturbance at Long’s home in April 2018, and had sent an intervention team with a mental health specialist at the time.  However, the team had decided there was no need to flag him for California 5150 processing; i.e., for mental health follow-up with the possibility of losing his gun rights.

Long had bought his gun, a Glock .45 semiautomatic pistol, legally.  The authorized clip in California would hold 10 rounds, but the sheriff said the .45 had an extended clip (capacity not reported).  The sheriff had no information on how many rounds Long was carrying, or where he got the extended clip.  Information has not been briefed yet on when Long purchased the gun.  He was 28, and could have bought it either very recently or years ago.

LA-area news coverage has included a number of interviews with people who were on-scene, and with parents who are waiting to know if their children are still alive.  Some haven’t heard from them since before the shooting, which started around 11:20 PM (PST) on Wednesday night.

One woman, interviewed by Fox 11, the local affiliate, had confirmed with her children that they weren’t at Borderline last night.  She had been at her wits’ end because they might have been, but was extremely thankful to hear from her daughter that she wasn’t there.  Unfortunately, the daughter knew about the shooting because her friend had called, terrified, from a bathroom in the club where she was hiding from the gunman during the shooting.  The mother thinks her daughter’s friend made it out, but at the time of the interview was still not sure.

This lady was inspiringly positive about Thousand Oaks, as a close-knit community, not being overcome by the evil of this attack.  In the interview, the Fox 11 reporter quoted a local official who had said earlier that “Evil visited Thousand Oaks tonight.”  Yes, the worried mother agreed; but she was determined that Thousand Oaks would not be defined or subverted by it. She finished by saying the most important thing was to pray for the victims and their families.

There was one other thing she said, however, that crystallized for me how off-track much of our thinking is today.  She was good-hearted lady, and the point here is not to call her out for error, but to call us all out for it.

Again, without meaning to single this lady out, this is a misguided question.  There is no “voting about this” that hasn’t been done, over and over again by the human species, for thousands of years.

We can’t “vote” to prevent these things.  The reason is that corporate action of the kind governments can take cannot and will not ever prevent them.  The fundamental problem here is not human political organization; it’s the human heart.

Politics doesn’t actually govern us.  The belief that it does is a terrible lie – and I mean a terrible lie – internalized and adopted in the last century.  We cannot change ourselves for the better by changing our politics.  The belief that we can has got us blind, deaf, incoherent, and paralyzed before the manifest incompetence of our politics and government programs to rid us of human problems.

That’s why the lie is so terrible.  Because it does more than just mislead us.  It holds us captive in a ghastly do-loop of shrieking at each other over things we have no power to “organize” and “vote” out of human life.

If we could make ourselves better through politics, we’d be perfect by now.  We have just spent the last 100 years trying to do exactly that: to perfect ourselves and our species through political programs and government coercion.  In the centuries when we did this through what we (often sloppily) call theocracy, we got exactly the same result.  Whether it’s secular political intervention or religious political intervention, it’s the same thing: an attempt to control what goes on in men’s consciences through the corporate, material force of human organization.

It doesn’t work.  As to mass killings, whether it’s three people at a time or 50, or 125, or 3,000, the human race has been voting against them for thousands of years.  We have laws up one side and down the other prohibiting and punishing them.  Yet they still happen.  This is not because we haven’t voted enough.

I recommend to each one of us to get that last sentence through his or her head.  I know Whom I put my trust in beyond government, and higher than politics.  Not everyone agrees.  But the truth that we all must understand is universal.  All attempts to invoke politics and government prohibitions as if they have the power to exterminate evil motives and prevent every evil act and every evil outcome are not just useless but counterproductive.  Until we acknowledge that, we will never move forward.  If we do not decide to acknowledge it now, without delay, things will only keep getting worse.

Does Congress offer remediation in civics? Alexandria Ocasio-Cortez could sure use it
Next Post
MSNBC’s Rachel Maddow promotes ‘Protect Mueller’ marches after Sessions firing