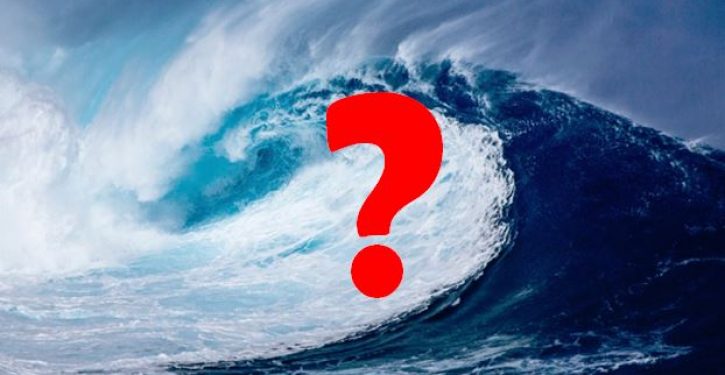 J.E. Dyer concluded her election night coverage last night at 2:20 a.m. on a positive note, writing, “The sun will come out tomorrow.” Indeed it has, bright and beautiful.

There was no tsunami last night, much less a wave. The Democrats did take control of Congress, winning more than the 23 seats needed to comprise a majority, but that was nothing close to the referendum on the president Republicans demonstrated in 2010 when the GOP picked up 63 House seats. Some House races remain too close to call, so the total damage has yet to be assessed.

So how did the winners and losers assess the Democratic victory? Pretty much the way you might expect. White House Press Secretary Sarah Sanders called it a “ripple,” while NBC News’s Chuck Todd qualified it as a “suburban takeover by the Democratic Party.”

“Wave” would have been an enormous and generational shift for the Democrats. Instead of shocking the political landscape for generations to come, the Democrats continue to do what they have done since 2016 — over-promise and under-deliver. Their night of redemption concludes with a big, giant, and thunderous whimper.

CNN vigorously debated over whether the Democratic House takeover could be classified as a “wave,” prompting an unnamed Republican source to submit, “If you have to litigate a wave, it’s not a wave.”

Barack Obama’s one-time green czar and now CNN contributor Van Jones cynically quipped that last night’s Democratic win was “not a blue wave” but an ongoing “blue war” against what he helpfully called “this infestation of hate and division.”

Politico came up with perhaps the best answer to the question of wave or no wave:

Democrats wanted a base of power in Donald Trump’s Washington and they got it.

They also wanted to wake up Wednesday morning to a radically changed country. They wanted permission to dismiss the past two years as a fluke of history, a hallucination now fading. And they wanted something more: to rub the president’s nose in the dirt of defeat and repudiation so badly that it would be hard to see him doing more than limp through the balance of his first term, much less with a credible path to a second.

Those things Democrats did not get.

To the contrary, the GOP defeat was not nearly as severe as the Democratic one in 2010, at a similar point in Barack Obama’s presidency, nor the one two years into Bill Clinton’s first term in 1994.

This leaves 2018 as the “Yes, but” election — not fully satisfying but by no means fully deflating for partisans of either side.

It will be interesting now to see where we as a country go from here.