In case you haven’t heard the latest results from the Florida gubernatorial race, it looks like Democrat Andrew Gillum will be the Sunshine State’s next governor. With 99% of the precincts reporting, Gillum has a slender lead of just 45,664 votes over Republican opponent Ron DeSantis. Nevertheless, MSNBC appears to be on the verge of calling the race for Gillum, who captured 3,343,634 votes to DeSantis’s 3,297,370.

As I write this post, the clock on my computer reads 8:49 a.m., which may have you wondering how any network is able to report the outcome of an election in a state where the polls opened scarcely two hours ago. In fact, the prediction is much older than that, having been made last night during “All In with Chris Hayes,” which airs at 8 p.m., when the following graphic appeared on screen.

Quick clarification here. Just want to say, earlier this hour, uh, we showed a graphic of the Florida gubernatorial race. May have caught your eye because our system had inadvertently populated some test numbers. Obviously, we do not yet have any vote totals here, the night before the election. That was a misfire. Don’t worry. I was pretty confused when I saw it up there, to see it myself.

So is this another instance of fake news, or was MSNBC merely indulging in a little wishful thinking? And if it’s the latter, why didn’t they give Gillum a more commanding lead? According to a Quinnipiac University poll released Monday, Gillum has a 7-point lead over DeSantis. 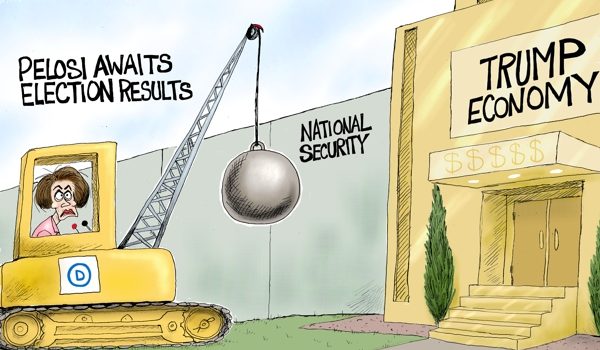 Cartoon of the Day: Nervous wreck
Next Post
Dangerous measures on the ballot about felons and property rights