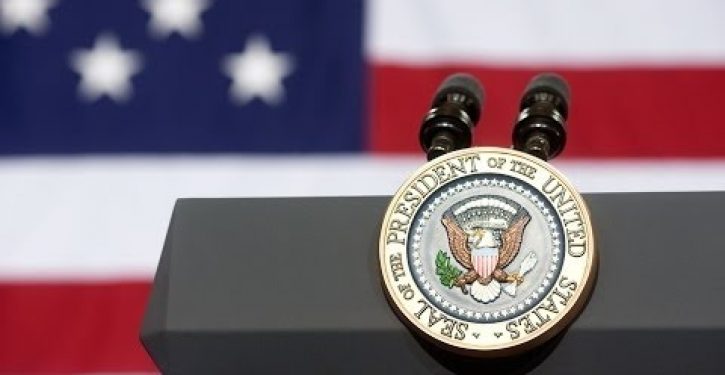 Let’s begin by enjoying the irony of Barack Obama standing in front of the nation whose Constitution he has run roughshod over for much of the last eight years waxing rhapsodic about the U.S. being a “nation of laws, not men.”

In his announcement yesterday that he is nominating Judge Merrick Garland to fill the vacancy on the Supreme Court left by the death of Antonin Scalia, he risibly claimed he was putting aside “short-term expediency and narrow politics” to abide by the law.

It’s pure fiction, of course. Virtually every action Obama has taken in his seven-plus years in the presidency has been motivated by petty politics, and this is no exception.

Senate Majority Leader Mitch McConnell has already stated unequivocally that the Senate will not conduct hearings on Garland, citing the so-called “Biden rule”:

Commentators on both the right and the left appreciate the role politics has come to play in determining who sits pm the high court. Charles Krauthammer said last night on Fox News Channel’s “Special Report with Bret Baier”:

Ever since the Supreme Court became a super legislature with the abolition, the striking down of all the abortion rights until 40 years later striking down all the laws on gay marriage, it has been a political appointment.

The idea that the president said today this isn’t about ideology it’s about competence is nonesense. All that was destroyed with the Bork nomination. The most highly competent, qualified nominee probably ever, struck down entirely on ideology and  when Obama was in the senate he filibustered Alito, who he admitted had all the qualifications.

Krauthammer went on to advise that “it’s about power. The Republicans have the power to say no. They should say no.”

The issue of Garland’s qualifications to be on the Supreme Court is beyond question.

But Republicans have said that because Obama is in the last year of his term, the seat on the court should be determined by the voters — who will be choosing the next president. They have vowed, in very explicit terms, to refuse to give Garland a hearing or a vote.

Most Republican senators will refuse even to meet with him….

It’s all very … political. But the Supreme Court has always been as much a political body as a legal one.

But it’s at this point in his analysis goes beyond Krauthammer’s by noting:

Supporters of the President, and of Garland, are seeking to impose the maximum amount of political pain on their opponents in the Senate.

Democrats have already started calling out their Republican counterparts as do-nothing obstructionists.

The obstructionist label is nothing new. The president and his supporters have been hurling that insult at Republicans since before they had a majority in either house.

The difference this time is that refusing to hold confirmation hearings in an election year could have “down-ticket” implications, especially in purple states. What’s more is that Hillary Clinton goes on to win the presidency, she will likely nominate a prospect far more liberal than Garland.

Finally, there is the reliably perverse RINO faction of the Republican party, which has already begun to buckle under the pressure. Sen. [score]Charles Grassley[/score], chairman of the Senate Judiciary Committee, no less, said last month:

I would wait until the nominee is made before I would make any decision. In other words, take it a step at a time.

I think I have a responsibility to perform, and I can’t worry about the election. I’ve got to do my job as a senator, whatever it is. And there will be a lot of tough votes between now and the next election.

‘Trump is clueless and classless, a bombastic blowhard’
Next Post
Bill de Blasio finally willing to attend NYC’s St. Patrick’s Day Parade because of this ‘milestone’