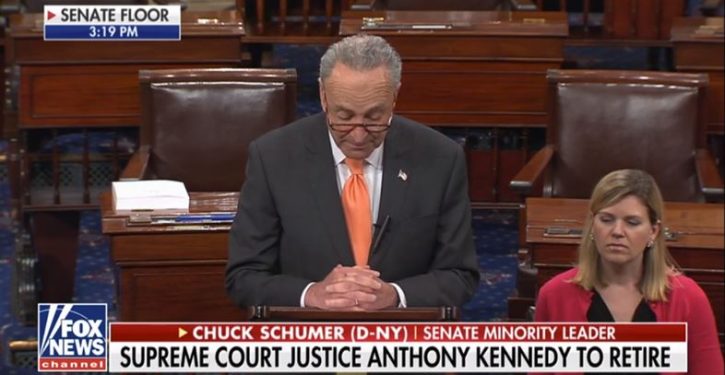 In August of 2017, when Donald Trump called for doing away with the Senate filibuster in relation to the healthcare vote, Senate Majority Leader Mitch McConnell said he would not support the idea. “It’s pretty obvious on healthcare our problem was not the Democrats,” McConnell is quoted as saying at the time. “The votes were simply not there.”

On Tuesday the subject of the filibuster came up again at the White House. According to Politico, the message to the 15 Senate Republicans who had come for a meeting, was to kill the filibuster now before Chuck Schumer and his fellow Democrats do in November in the event they retake the Senate.

Now in light of yesterday’s blockbuster headline that Justice Anthony Kennedy is vacating his seat on the U.S. Supreme Court at the end of July, the subject is sure to be back on the table.

Back in 2013, when then-Senate Majority Leader Harry Reid pushed through his controversial change to Senate rules so as make it easier to approve Barack Obama’s judicial nominees, the rule excluded Supreme Court nominations, which still required a 60-vote minimum.

At the time, Reid, flanked on one side by Sen. Chuck Schumer and on the other by Sen. Patty Murray, was asked whether he feared having paved the way for Republicans at some future date to permit Supreme Court nominees to require a simple majority for confirmation.

Here was his answer:

MUST WATCH: From a simpler time 5 years ago…
"Aren't you worried Republicans will get rid of the filibuster on the Supreme Court?" – Reporter
"Let them do it! Why in the world would we care?!? If they want simple majority, fine!" – Harry Reid pic.twitter.com/RfPqmjeiiw

It is now interesting to reflect now on the utter federal case Democrats are making over Kennedy’s replacement. Yesterday, after Kennedy’s announcement, Schumer, who tacitly agrees with Reid in the above video, said on the Senate floor:

Our Republican colleagues in the Senate should follow the rule they set in 2016: not to consider a Supreme Court justice in an election year.

He was referring to Republicans’ refusal to vote on Obama nominee Merrick Garland, but Schumer seems to be forgetting. Republicans’ opposition to holding a vote on an Obama nominee took place during a presidential election year — one, moreover, in which Obama was no longer eligible for reelection.

Susan Collins says she won’t vote for Supreme Court nominee who doesn’t support Roe v. Wade
Next Post
Joe Biden: ‘I don’t know what I’m going to do’ in 2020