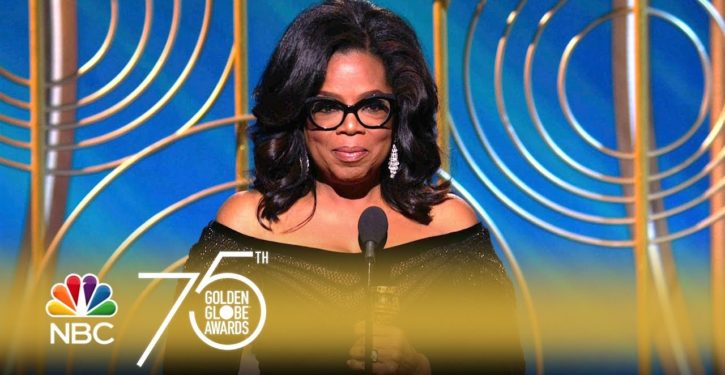 Winfrey spoke at a campaign rally for Abrams, lauding her for such incredibly generic platforms as being the candidate who “cares about the things that matter.” Yeah, that pretty much encompasses everybody on the planet. Nobody sits around and says “Ya know, I only care about the unimportant stuff.”

Oprah tossed in a few other hot buttons that resonate with Democrat voters but amount to very little value such as “common-sense gun control.”

Still, Winfrey said she had no intentions of being affiliated with any particular party. “I’ve earned the right to think for myself. … I don’t want any party and I don’t want any kind of partisan influence telling me what decisions I get to make for myself.”

Odd but isn’t that the same kind of independent thinking that had every liberal in America despising Kanye West during his brief period of devotion to Donald Trump? And could this be a sign that Oprah is ready to consider getting into politics and running in 2020?

Not the Only Celebrity

Oprah isn’t the only Hollywood star to come to the aide of Abrams campaign.

Moderately amusing comedian Will Ferrell was spotted going door-to-door, hitting the pavement for the Democratic candidate.

Yes, this is Will Ferrell knocking on doors asking people to vote for @staceyabrams in Georgia.

“We are here, and we’re trying to get people to volunteer for the Stacey Abrams campaign,” Ferrell said as he passed out campaign stickers at Kennesaw State on Friday.

In what may amount to the greatest troll effort in the history of campaigning, Pence stole a line from Ferrell’s movie Anchorman to slap back at the Hollywood liberals.“I’d like to remind Stacey and Oprah and Will Ferrell, I’m kind of a big deal, too,” he deadpanned.

Boom! The crowd responded with raucous cheering while Pence, in full Dad mode, asked if they got the joke.

“I heard Oprah was in town today. And I heard Will Ferrell was going door-to-door the other day. Well I’d like to remind Stacey and Oprah and Will Ferrell — I'm kind of a big deal, too,” Vice President Mike Pence said at a campaign event for gubernatorial candidate Brian Kemp pic.twitter.com/74AsupqST8

“I’ve got a message for all of Stacey Abrams’s liberal Hollywood friends,” Pence continued. “This ain’t Hollywood. This is Georgia. And Georgia wants a governor that’s going to put Georgia values and Georgia first. And Brian Kemp is going to do just that.”

Abrams and Oprah seem to think that they better represent Georgia values. But that message is countered by recently surfaced photos that show Abrams burning a Georgia state flag outside the Capitol building in 1992. As for Winfrey, she once said that old white people “have to die” before progress can be achieved against racism.

“There are still generations of people, older people, who were born and bred and marinated in it – in that prejudice and racism – and they just have to die,” Winfrey said.

WATCH: Don't get me wrong here, racism is disgusting…
BUT "President" Oprah saying that a generation of people that "JUST HAVE TO DIE" because they were born into a culture of racism is hard to watch. pic.twitter.com/KKIkZQOBkH

Time for an official ‘national day of remembrance for Americans killed by illegal aliens’?
Next Post
CIA under Obama read congressional emails about intel community whistleblowers