CNN anchor Don Lemon thinks he knows the cause of terrorism: white people. He told CNN anchor Chris Cuomo — the brother of New York Governor Andrew Cuomo (D) — that “We have to stop demonizing people and realize the biggest terror threat in this country is white men, most of them radicalized to the right, and we have to start doing something about them.”

Lemon’s remarks reflect the false idea that terrorists and mass shooters are disproportionately white. They aren’t. Even the liberal publication Slate admitted this back in 2017. As Slate’s Daniel Engber noted, “mass shooters aren’t disproportionately white,” and “white people” are not “overrepresented among mass shooters.” As I pointed out in 2013 in the Philadelphia Daily News, “Mass killings have also been committed by nonwhites, such as Virginia Tech shooter Seung-Hui Cho, Beltway sniper John Muhammad, Long Island Rail Road shooter Colin Ferguson, and Wisconsin’s Chai Soua Vang.” The fact that many other mass shooters are white simply reflects the fact that over three-quarters of Americans are white.

White people don’t have a monopoly on terrorism, either. Two of the world’s three most violent terrorist groups — Boko Haram and al-Shabab — are African. The bloodiest terrorist group in the world in several recent years was Boko Haram, a violent Nigerian sect. That African terrorist group has killed countless thousands of people, including burning students alive and abducting many girls, and laid waste to entire regions in Nigeria, Africa’s most populous country.

Lemon’s misleading remarks were crude race-baiting and fearmongering. Lemon, whose preference for the Democratic Party is impossible to conceal, may conceivably have intended his remarks as a way of riling up CNN viewers to get them to turn out and vote for the Democratic Party. Few CNN viewers vote for Republican candidates when they bother to vote. According to a recent Suffolk University poll, 95% of Fox News viewers say they would support Republicans in the upcoming Congressional elections, while only 4% say they’ll vote Democratic. By contrast, only 3% of CNN viewers would vote Republican. So making CNN viewers angry and fearful enough to vote will benefit the Democrats, not Republicans.

Some other liberal media organs such as the Washington Post are busy peddling fear and anger to drive up voter turnout among their liberal base. The Post, which has not endorsed a Republican for president since 1952, can hardly conceal its desire to purge neighboring Virginia of the Republican members of Congress who currently represent Virginia’s suburbs, such as David Brat, Barbara Comstock, and Scott Taylor, all of whom are in close races. (Comstock is likely to lose her seat in Congress.)

On Oct. 12, it published a hate-filled rant from a feminist history professor. “I hate all men and wish they were dead,” she wrote, boasting of what she said to her loving husband to show that “there is nothing small about women’s rage these days.”

The Post has published many other hate-filled screeds over the years, designed to foment anger and fear among its predominantly liberal readers. One example is a racist op-ed by Charlotte and Harriet Childress. They falsely claimed that “nearly all of the mass shootings in this country in recent years … have been committed by white men and boys.” The Post published this false claim, even though most of the shootings committed in The Post’s own region were committed by non-whites, such as Beltway sniper John Muhammad and Virginia Tech shooter Seung-Hui Cho.

Yesterday, the Washington Post published not one, but two articles claiming that all Republicans were to blame for the Pittsburgh synagogue shootings. Jerome Woehrle debunked one of those articles at this link. Hot Air’s Jazz Shaw took issue with the other at this link. It’s bizarre for a newspaper to blame Trump — much less all Republicans everywhere — for the Pittsburgh shooting, given that the Pittsburgh shooter hated Trump and leading Republicans. Indeed, the shooter “was explicit in his dislike of the president, saying he did not vote for him and had never ‘owned, worn or even touched‘ a Make America Great Again hat,” according to a USA Today article.

The Post has also peddled the false notion that Sarah Palin and the Tea Party inspired the Tucson shooting, even though the shooter was not a Palin follower or Tea Party activist, as David Brooks and others have pointed out in the New York Times. The Washington Post’s Paul Kane claimed recently the Tea Party helped incite the shooting, before retracting that false claim because it was not supported by any evidence.

There is also no evidence that the shooter saw the political “map with crosshairs” put out by supporters of former Alaska Governor Sarah Palin (R). That map targeted 20 House districts, not an image of Congresswoman Gabby Giffords. Yet a Washington Post columnist falsely claimed in 2016 that the map’s “consequences” were that “Jared Loughner showed up with a gun” and shot Giffords. But images of crosshairs are utterly commonplace in political advertising by members of both political parties, and they have never inspired violence. As another journalist noted, “crosshairs and bull’s-eyes have been an accepted part” of the American political lexicon.

Post writers sought to falsely pin the blame on conservatives for the Tucson shooting because Democratic Congresswoman Giffords was wounded in the shooting. But the shooter also killed Republican Judge John Roll. Both of them were shot in the same shooting by a bizarre loner, Jared Loughner, who was not a conservative. One of Loughner’s favorite books was The Communist Manifesto. It is unlikely, however, that any particular ideology motivated Loughner. Instead, he may have been motivated by his paranoid belief in things like “mind control.” He thought the government was engaged in “mind control” by “controlling grammar,” which is not a conservative idea, much less one shared or promoted by Sarah Palin or the Tea Party. 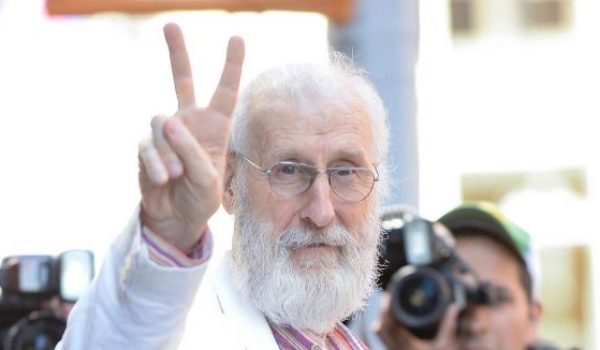 Liberal actor James Cromwell warns of ‘blood in the streets’ if Democrats lose next week
Next Post
Sorry, libs: Obama’s anti-police rhetoric wasn’t merely as bad as Trump’s: It was worse