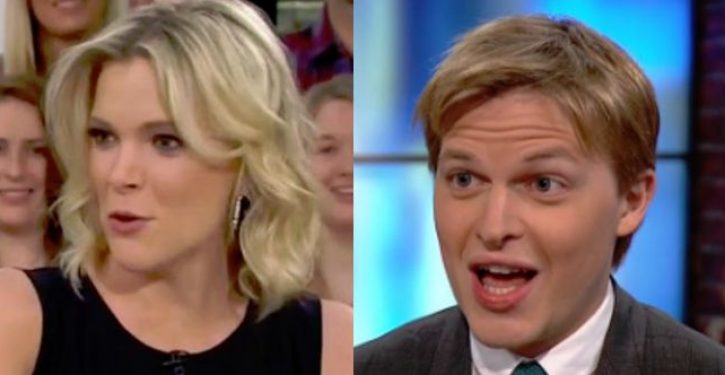 Megyn Kelly’s lawyers are requesting that famed #MeToo reporter Ronan Farrow be present at talks with NBC executives as the network prepares to cut the unpopular host loose.

The move appears to be an intimidation attempt, using a reporter publicly critical of the network for burying his stories about sexual misconduct against women, as she battles for the remainder of her bloated $69 million contract.

Kelly found herself swirling in controversy this week after ill-advised comments on the acceptability of wearing blackface costumes on Halloween.

Earlier this week, Kelly gave a bizarre defense of blackface costumes saying it had been an acceptable practice back in her day.

Decades ago, Kelly argued, going out on Halloween in a blackface costume was acceptable. “That was OK, as long as you were dressing like a character,” she claimed.

“You do get in trouble if you are a white person who puts on blackface on Halloween, or a black person that puts on whiteface for Halloween,” she admitted, prior to referencing a reality show star who wanted to dress as Diana Ross. “She wants to look like Diana Ross for one day, and I don’t know how that got racist on Halloween,” Kelly exclaimed.

Naturally, Hollywood hypocrites, many of whom have taken part in blackface skits or work with others who have, jumped all over her statements.

Should she have made the comments? No. It’s always safer to stray from topics that are racially charged when you’re a public figure. Are they a fireable offense? No. NBC is just looking for a means to get out of her disastrous signing.

Kelly’s attorney asked NBC executives if Farrow could attend the meeting scheduled for Friday — this according to an insider from Kelly’s camp.

The question here is, why Ronan Farrow? Why is his presence necessary at an exit interview with the network? Could she be planning to use knowledge of network misconduct in her negotiations?

NBC has a history of covering up for sexual predators, and some of those coverups have involved topics of Farrow’s reporting directly. One of those individuals was Matt Lauer, co-host of NBC’s Today show for 20 years, who was fired following a string of sexual harassment allegations.

Speculation at the time was that Farrow’s stunning exposé of Harvey Weinstein could ultimately have led back to Lauer, so the network refused to run with his #MeToo story, which he eventually shopped to the New Yorker.  Farrow would go on to win the Pulitzer Prize for his reporting on Weinstein.

Farrow’s history with the network and Kelly’s current predicament make this seem like a clear attempt to scare NBC into submitting to her demands. Her tearful apologies weren’t enough to save her job, so now she’s calling in the big guns to help her get her money.