In a gotcha piece in The Washington Post, columnist Aaron Blake makes the claim that President “Trump is unwittingly blaming himself for postal bombs.” How? Blake explains:

At a rally in Wisconsin on Wednesday, Trump made a show of supposedly being civil but also cast blame on others who employed harsh rhetoric. He criticized those who “carelessly compare political opponents to historical villains.” He added that people need to “stop treating their opponents as morally defective.”

Trump also pointed a finger at the media — a sentiment he expounded upon Thursday morning in a tweet. “A very big part of the Anger we see today in our society is caused by the purposely false and inaccurate reporting of the Mainstream Media that I refer to as Fake News,” he said. “It has gotten so bad and hateful that it is beyond description. Mainstream Media must clean up its act, FAST!

So Trump has now cited three causes for what happened Wednesday: people who villainize their political opponents, people who cast their opponents as “morally defective” and resentment of the media. All three effectively implicate Trump himself.

It’s a valiant effort, but to the degree that Blake’s argument holds water, all he is really doing is attempting to drag the president down to his own level.

Which is to say, Trump is right. The Left is unremittingly brutal when it comes to this president. When he calls for unity, their answer is “Nothing doing.” Yesterday when he commended local and federal authorities on their success in rapidly bringing the mail bomber to justice, the Left ignored his positive tone and message, instead dragging up past grievances and engaging in name-calling.

Here’s Jason Johnson of The Root on MSNBC (transcript, courtesy of NewsBusters, follows):

It’s good to see that the FBI and national security agencies continue to do their job with vigilance despite the fact that they’ve been bludgeoned by this president for the last year for supposed incompetence and corruption. Our lives, as much as I may have criticisms of how law enforcement operates in this country, they are still our line of defense against maniacs and terrorists out there.

But I have to say, Nicolle, and this has always been a problem with this President. He has always shown a sympathy or dismissiveness towards terrorism. He is a terrorist sympathizer. I mean given the way he responded to what happened in Charlottesville, given how he responded to Khashoggi, given how he puts what happened today in context of how it affects the midterm elections, we don’t have leadership in this country when it comes to domestic terrorism. This president foments it as much as he is occasionally forced to speak against it. [Emphasis added]

CNN Newsroom co-host Jim Sciutto went even further in his attack on Trump, comparing him to a member of ISIS who helps lone wolves become “self-radicalized” and carry out attacks:

These are examples of precisely what the president meant when (to return to Blake’s comments) he “criticized those ‘who carelessly compare political opponents to historical villains.'”

If as they claim, the Left is looking for a return to normalcy in this country, they are going to have to do their share to make that goal possible.

Iranians caught posing as Americans on Facebook to hype Mueller probe, slam Trump
Next Post
Today’s deadly synagogue shooting: another grim reminder that freedom of religion is under assault 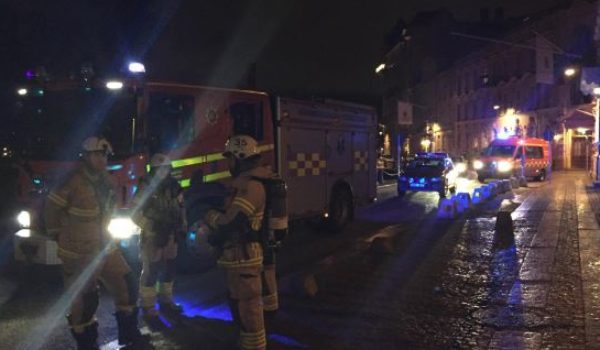