The Associated Press on Sunday changed a headline after a backlash from liberals furious at the news agency for describing a caravan of illegal immigrants heading towards the United States as an “army of migrants.”

“A ragged, growing army of migrants resumes march toward US,” read the original headline on the AP story. The AP later changed the headline to replace the word “army” with “caravan.”

Though the AP has used the word “army” to refer to large groups of people besides migrants — including nurses and political activists — many on the political left criticized the wire service for its original headline.

Words matter. Is it @AP style to call migrants an “army”—above a photo of mothers tending to their infants and toddlers, no less? This is not only incorrect, but it enables a racist narrative sold by this @POTUS and his supporters. Armies invade. These people are running away. pic.twitter.com/p9TBA0y9PG

Bob Brigham, a writer for left-wing website Raw Story, accused the AP of spreading “#FakeNews” and a “lie” about the migrant caravan.

The @AP has been misinforming readers for over an hour with this shockingly dishonest story.

“This may be one of the worst headlines I’ve ever seen from a major media outlet. Pure rightwing framing,” claimed liberal activist Peter Daou.

Hey @AP —it’s not an army. Really inappropriate to call it as such. Do better. https://t.co/uu40KFCunN

The AP did not immediately return a request for comment on the headline change.

President Donald Trump has threatened to close the southern border between the U.S. and Mexico and cease aid to some Central American countries in order to stop the caravan. 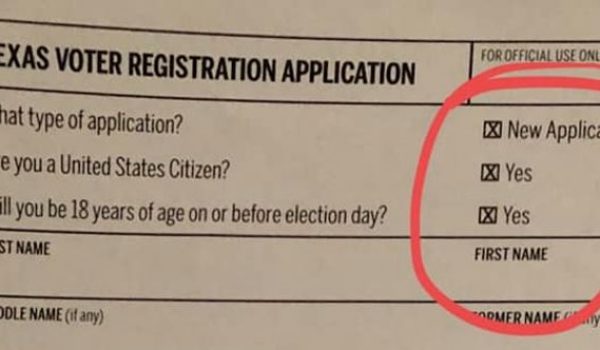 Texas Dems register non-citizens to vote by pre-checking citizenship box on application
Next Post
It’s humanly impossible, but the caravan will reach the U.S. border before Election Day: Bank on it