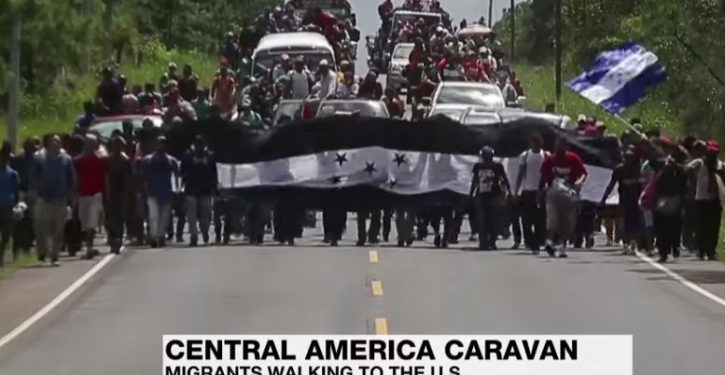 On a Fox News show Wednesday night, I caught Newt Gingrich predicting that the two things foremost on voters’ minds for election day in November would be the circus surrounding the Kavanaugh confirmation and the migrant caravan coming from Central America.

I’m not so sure about the Kavanaugh confirmation, although if we focus on the circus-atmosphere aspect, Gingrich may be correct.  Whichever side of the Kavanaugh divide people were on, I think most were startled by the overwrought political environment that seemed to prevail.  The impression of that, for good or ill, may well be particularly important to voters’ choices.

The caravan, on the other hand, is likely to be on many minds, as Gingrich says — if it gets to the U.S. border in large numbers.  On Thursday, Mexico deployed federal police to the southern border with Guatemala, just as the first migrants from the caravan, which has reportedly swelled to some 4,000 people, began to arrive there. According to the AFP report, there are “several hundred” in the group that arrived on Thursday.  Guatemala has sent “police reinforcements” as well.

Mexico is also asking the UN for assistance in dealing with the migrant surge.  As Ben Bowles pointed out earlier on Thursday, Mexico isn’t anxious to welcome the migrants.  Asking for UN assistance is actually a way of trying to internationalize the problem, and invoke the obligation of other nations — such as the United States — to take in whatever migrants are recommended by the UN.

Trump put out a series of tweets Thursday morning stating his intentions.

I am watching the Democrat Party led (because they want Open Borders and existing weak laws) assault on our country by Guatemala, Honduras and El Salvador, whose leaders are doing little to stop this large flow of people, INCLUDING MANY CRIMINALS, from entering Mexico to U.S…..

….In addition to stopping all payments to these countries, which seem to have almost no control over their population, I must, in the strongest of terms, ask Mexico to stop this onslaught – and if unable to do so I will call up the U.S. Military and CLOSE OUR SOUTHERN BORDER!..

….The assault on our country at our Southern Border, including the Criminal elements and DRUGS pouring in, is far more important to me, as President, than Trade or the USMCA. Hopefully Mexico will stop this onslaught at their Northern Border. All Democrats fault for weak laws!

Of course, the threat getting the most attention is the one to deploy the military and close the U.S. southern border.  It’s not clear if the president means actually closing the border in a formal sense, which would entail closing ports of entry and cutting off legal cross-border traffic.

It seems more likely that he’s talking about using the military to prevent illegal border crossings outside the ports of entry, and deter escalation from localized demonstrations, which were a feature of the last activist-organized “caravan” from Central America in April of 2018.  U.S. Customs and Border Patrol doesn’t have the resources to decisively shut down eruptions of border crossings and border brinkmanship from protest-type gatherings; it would take the military to do that.

It’s also not clear the direction any of this will take between now and 6 November.  I’m not sure radical-left activists understand that it isn’t Trump who will get a black eye from a showdown with migrants primed to demand entry to the U.S., just before the election.

It really does take living in a rarefied bubble to think the majority of Americans view without concern the prospect of being flooded by migrants as Europe has been over the last several years.  Focusing the growing problem for the public, with a concentration of 4,000 in a “caravan” determined to defy the policy announcements of the president and the vice president of the United States, is as politically counterproductive as it’s possible to be.

There is no one outside of the farthest left activists and ideologues who will see that and want to align him or herself with it.  Americans do not, by and large, believe that the entire world has a right to migrate into their country at will, in defiance of our announced national policy.  The ideologues who organize the caravans do believe exactly that, however — a point we examined with the earlier 2018 caravan (link above).

Americans don’t want to deal brutally with migrants.  But they don’t view it as brutal to prevent migrants from entering the country illegally, nor do they view border enforcement — including processing for asylum-seekers, and the possibility of rejecting them — as inhumane.  That puts ideological activists at odds with average Americans; it is not something that puts Americans at odds with Trump.

It would be a serious political miscalculation for activists to set up a pitched confrontation at the border just before the election.  They could not more surely guarantee the most possible votes for Republican candidates.

But will they try to set up such a confrontation?  I’m not so sure.  Interestingly, the Fox News report on Mexico’s UN request (link above) contained this passage, filed at 8:30 AM (Eastern) on 18 October  (emphasis added):

Mauro Verzzeletti is a priest who runs the Casa del Migrante shelter in the Guatemalan capital. He says about 3,000 people slept there overnight and left around 4 a.m. to continue the journey.

Verzzeletti adds that “more are arriving.”

The caravan has largely dispersed. In Guatemala City on Thursday morning, different bands of people could be seen walking together in a line, some boarding buses or trying to hitch rides.

This suggests two things: that the organizers are aware Mexico will be making much more of a concerted effort to break up the surge than was the case in April (when the Mexicans basically ushered the migrants through, often with transportation assistance); and that President Trump has no intention of being overwhelmed and under-prepared for the migrants’ arrival.

Both factors make it wiser to not travel in a big caravan — one that is basically the size of an army brigade — and advertise all along the route where the formation is.

It will be necessary to watch closely in the next few days.  Mexico may defuse the politically confrontational nature of the “caravan” as the federal authorities there deal with the arrivals at the southern border.  We can assume the U.S., as a major stakeholder in this drama, will be actively engaged, working alongside Mexico if behind the scenes.  If the political fuse of the caravan is snuffed out, it will be less of a factor in the election.

My prediction at the moment would be that that’s what we’ll see.  That doesn’t mean that some of the migrants won’t get through — through Mexico and to the U.S. border.  It would mean, rather, that activists who sought to make the caravan a political grenade to lob at the election ended up thinking better of that.

Three additional points to round out this update.  One, as Ben Bowles mentioned: Rep. Matt Gaetz (R-FL) tweeted video on Wednesday that seemed to show organizers handing something — Gaetz says it’s money — to caravan participants in line in Honduras.

Ben rightly observes that it isn’t clear what’s going on.  Skepticism about conclusions is in order.  Gaetz did tweet an update on Thursday, however, clarifying where the video came from and what his source was for his claims about it.

The lazy identity politics of the left runs so much deeper, Soledad. This is now what the political left offers America. Everyone is a racist. Give me a break. (Keep in mind I got this video from people inside the Honduran government through a senior US official) #OpenGaetz https://t.co/BJiSZVdVwW

CORRECTION: This video was provided to me by a Honduran government official. Thus, I believed it to be from Honduras. https://t.co/PYASc9vOLB

The second point is that Guatemalan President Jimmy Morales disclosed to his national media last week (11 October) that 100 ISIS terrorists had been apprehended in Guatemala.  That’s quite a few ISIS terrorists in one Central American nation.  And as Judicial Watch points out, it hasn’t been uncommon to find evidence of illegal U.S. border crossings by men from the typical country sources of ISIS’s manpower, nor would it be unlikely for ISIS operatives to blend in with a 4,000-person caravan.

Border enforcement and asylum-seeking are both, inherently, national security issues.  The presence of ISIS in the Americas reinforces that reality, clarifying that border and immigration policies cannot be solely about feelings of compassion (or virtue-signaling, for that matter), and no sensible person would think they should be.

The third point is one that probably will matter in the present case, even if the caravan is broken up enough to not become politically explosive.  A report from yesterday is a reminder that U.S. accommodations for migrant families and unaccompanied minors are still inadequate, and ICE is having to simply release hundreds of people into the U.S. population.

Statistically, this is not the non-problem activists insist it is.  A significant percentage of unaccompanied “minors” has actually been of adult age (18 or over); entering as unaccompanied minors has been a significant path into the U.S. for MS-13 gang members (see here as well); and processing families and unaccompanied minors brings the added burden of verifying that children are not being exploited by human trafficking rings — a very real problem.

Meanwhile, court records indicate that nearly 40% of “asylum-seeking” families with court dates have failed to show up for them.

None of these factors means that the U.S. should simply hunker down and fend off migrants.  Migrants aren’t coming solely because they’re being organized into caravans by activists.  Some of them are fleeing real problems of crime and failing economies.  And the surging American economy is a magnet now, even more so than it was one or two years ago

Unfortunately, key long-term assistance programs — some that had been in place since the Reagan administration — were curtailed under Obama, with damaging consequences for conditions in Central America.  Many communities there have been increasingly under the gun from cartel gangs, and more than half the countries of the region have implemented increasingly socialist policies that discourage and deincentivize businesses and wage-earners.  The collapse of the once-vibrant Venezuelan economy has been a major hit for Caracas’s Central American neighbors.

Even voters who don’t generally like foreign aid should understand that it is nowhere as important to our national well-being as it is in Central America.  Economic cooperation, engagement on security and law enforcement, support for local reformers who want to emphasize constitutional consensualism over caudillos and cronyism — these are the things we need to get back to.  There are good people to reach out to in Central America.  We’ve done it before, with very positive results.

We do need to protect our own borders and enforce our laws.  But in the end, the people of Central America are by far the most likely to refrain from setting off on foot for the United States if they have hope and a future where they are.  We can help with that. 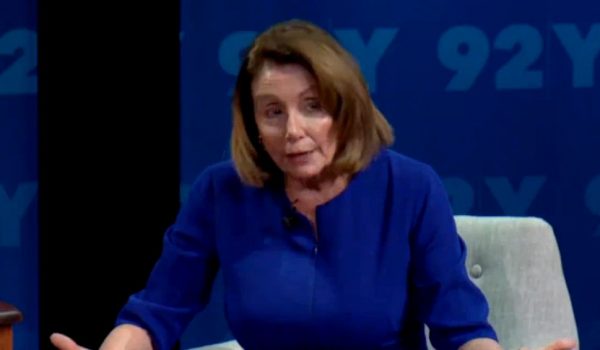 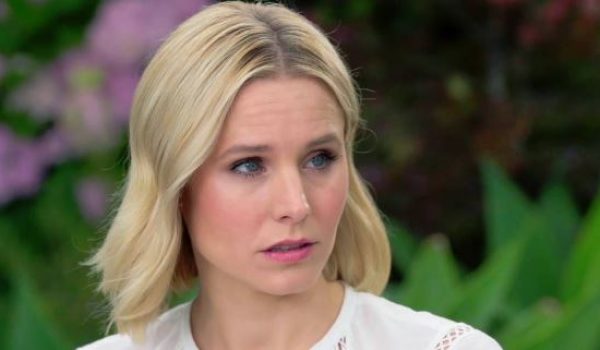