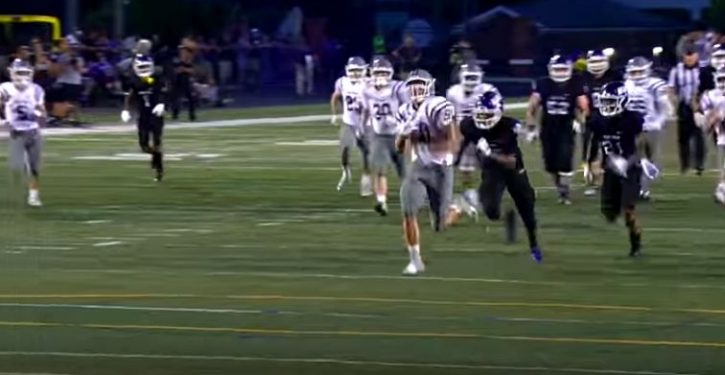 The LU Inner Circle is bloody but unbowed after a bruising Week 6 for the FBS contingent.  Toledo was our bright spot with a big rivalry win over Bowling Green, and we congratulate Air Force for their accomplishment.  When they’re not playing Navy they’re all right by us.

But it’s a mad, mad, mad, mad world, and we’re ready to find us some Ws again for the rest of the crew.  Enough with the suckage.  On to victory.

Granted, the University of Tulsa, which beat Notre Dame 28-27 on 30 October 2010, probably won’t be our victory totem for Week 7.  We’re encouraged that they’re having “quality” losses, at least, but at 1-4, they’re up to an awful lot of them.  Friday night they host #23 South Florida, which comes in 5-0, with a killer ground game and that win over Georgia Tech, and, well, ranked #23.  The oddsdudes have the Bulls giving 7, which is a major nod to Tulsa by someone.  Oklahoma’s FBS football bettors are the gutsiest crowd on the planet.

Oklahoma has decided to be #11 for a while, as it was just getting too noisy up there in the single digits.  The Sooners’ off week couldn’t come at a better time; they unloaded long-time DC Mike Stoops after the unseemly loss to Texas (yes, rumor from last week, noted in the comments section, confirmed), and assistant head coach/DT coach Ruffin McNeill is stepping in to take over the position.  Lincoln Riley knows McNeill from their days at East Carolina (where McNeill was head coach 2010-2015) and Texas Tech, and hired McNeill in 2017.  Sooner fans be like, “Dude, why didn’t you give Mike his farewell party a year ago?”  TCU next week on OU’s dance card.

Oklahoma State was likewise getting sick of the notoriety up in the Top 25, and retreats to the haunts of gentility this week.  Joining the Pokes on Saturday will be another Inner Circle stalwart, as Kansas State hosts in Manhattan. OSU goes in favored by 7, but we’re expecting good action on at least three fronts: gridiron, concession booth, and crushing coif.  Memo to Coach Snyder: fuhgeddaboutit.  Gundy’s got you hogtied in that department.

Navy hosts Temple for an AAC contest on Saturday.  The Mids were snaked last week by Air Force’s stealth QB D.J. Hammond, who presumably has won the starting position with an excellent game after an opening month of dithering by the Falcons.  The ineffective Navy showing has to contribute to the 7 being given by the Owls at Annapolis on Saturday.

Army will be at San Jose State Saturday afternoon, and we can feel from here why there doesn’t seem to be a line on the match (because the 0-5 Spartan defense couldn’t stop a troop of Cub Scouts).

Air Force heads to San Diego State Friday night, which, with the Falcons coming off the Navy win and the Aztecs coming off a victory over Boys Estate, could be a rousing kind of a game. Maybe even more so than whatever Utah’s going to do to Arizona, also Friday night.  SDSU gives 11.

Virginia Tech is also done with the noise for now, and will be meeting North Carolina in a pristine and unranked state, at 7 PM Eastern on Saturday in Chapel Hill.  The Tar Heels have been beanbag so far, 1-3 with some pretty much non-quality losses, while the Hokies have been all over the place.  The 5.5 edge for VT looks about right.

Nevada has the big-cheese opportunity Saturday night hosting Boise State, which will stagger in with a chip the size of the Las Vegas Eiffel Tower on its shoulder after The Succumbing to SDSU.  The Broncos are giving 16.5.

Like so many in the Inner Circle, LSU has re-homed itself in the double digit section after last week, sporting a #13 for a yuuge SEC match hosting #2 Georgia on Saturday afternoon.  Georgia’s giving 7.5.  LSU has got to lose the turnovers and penalties.  Got to.  What can you say about the Georgia D.  Well, Geaux!

TCU is hosting Texas Tech as this goes to post Thursday evening, in their Storied Rivalry contest for the Saddle Trophy.  We assume Texas Tech’s fruity Masked Rider, as a proud Texan, has an actual use for a saddle, but otherwise it’s not clear why Horned Frogs, Christians, or Techies any of ‘em would particularly need one.  At any rate, we’re agnostic on the topic.  The game start sees the Toads giving 7.5.

(Update at posting time: TCU needs to stop losing the dang ball.  Overall note: so much running all over the field by both teams, so little scoring.)

Toledo is off to Eastern Michigan, at 2-4 the cellar-dweller in the MAC West.  Should be an interesting game: the Eagles’ deficiency is offense, but they’ve got some pretty healthy chops on defense, and won’t be a pushover even for the Rockets’ afterburners.  Toledo’s giving 2.5.

Wyoming will be at Fresno State Saturday night, with the Bulldogs handing out 18.  Meh.  Probably about right, but – well, meh.

#1 Alabama is favored by 28 hosting Mizzou.

#5 Notre Dame gives 21 hosting Pittsburgh.  New #6 West Virginia, pride of the Big 12, will be at Iowa State with a give of 6.5.  The Cyclones are sly, cunning, and bear great watching. We’re just saying.

#8 Penn State hosts Michigan State in one of our all-time favorite Storied Rivalries, the Battle for the Grand Rapids Side Table.  The official name of this artifact is the Land Grant Trophy, but whatever you call it, it’s begging for overstuffed ‘60s plaid and a lamp with some tasteful brown ball fringe on the shade.  We’re not sure the Spartans have been quite as woeful as the 13.-5-point PSU give would suggest, but they have fallen short of expectations this season.  Still may be worth checking out the first half.

#10 Central Florida will be at Memphis with its Death Squad D giving 4.5.

Notable action is a little thin this week, but of course we would never fail to mention #15 Wisconsin at #12 Michigan for the marquee match-up Saturday evening.  The Wolverines are giving 9.5  Hmm.

In Storied Rivalry matches, Purdue will be at Illinois to fight for the Purdue Cannon, which we regret to report is a little cannon replica mounted on some wood.  But it does commemorate an actual cannon once almost deployed in celebration of a gridiron match long ago, and now reportedly being maintained by an honor cannon maintenance unit.

Purdue is favored by 10.

UCLA will be at Cal Saturday evening for a bear fight, with the Golden Bears giving 6.5.

In FCS, McNeese State has inched up to #9, and has the weekend off.  The Cowboys will be back in action at Incarnate Word (San Antonio) next week.

In Div II, Slippery Rock is 5-1 coming off the win over Indiana PA, and hosts Edinboro for Homecoming on Saturday.  The Fighting Scots come in 4-2, with losses to California PA and Mercyhurst, and look solid but beatable.  SRU got votes in the Div II Coaches Poll after knocking off IUP, so good on ‘em.  Homecoming will be wet and chilly, upper 40s for the 2 PM kickoff.

UCO, now 3-3 after the win over Central Missouri, is off to Missouri Western (St. Joseph, MO) for an MIAA bout Saturday afternoon.  This will be Homecoming for the 4-2 Griffons, who beat Fort Hays State (UCO lost) but also lost rather badly to Central Missouri.  The game-time weather at 1 PM at least looks cooperative, with upper 50s and clouds but no precipitation forecast.

In Div III, Rose-Hulman has the weekend off.

Christopher Newport is also off this weekend.

Merchant Marine is 4-1 after beating Norwich, and heads to Springfield (MA) on Saturday to take on the Pride of Springfield College.  The Pride is 5-1 and just busted a vote this past week in the Div III Coaches Poll, so this will be a big one for the Mariners.

Known as the “Father of Volleyball,” William Morgan graduated in 1894 from the Young Men’s Christian Association Training School (Springfield College’s former name) after playing football under the great Alonzo Amos Stagg, the patron saint of Div III pigskin.  Morgan wound up after graduation with a position at the Holyoke YMCA, and the rest is history.  His game was originally called “Mintonette,” in a nod to badminton, but we suspect the burly fellows who took up the game found that a little off-putting.

Morgan eventually commissioned a special ball for his new game from the firm of A. G. Spalding & Bros. of Chicopee, Massachusetts.

50s and spitting wet for the 2 PM kickoff.