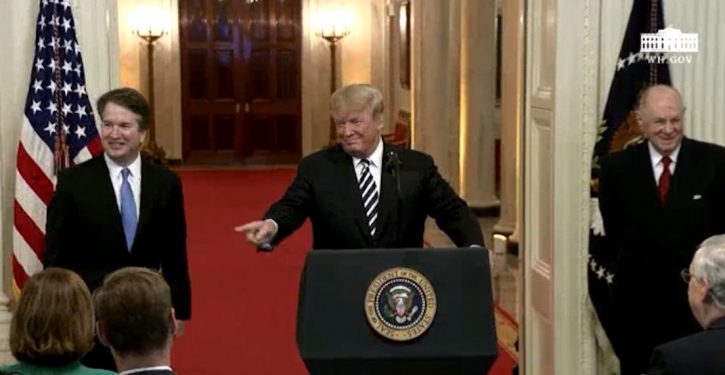 [Video of the ceremony now embedded at the bottom. – J.E.]

By the time this goes to post, President Trump will have completed the ceremony he is holding Monday evening in the East Room of the White House to publicly swear in the Supreme Court’s newest associate justice, Brett Kavanaugh.

Kavanaugh was officially sworn in Saturday after the Senate vote, behind closed doors at the Supreme Court.  A viral video clip commemorates the reaction of protesters to the swearing-in, with footage of them shouting chants against Kavanaugh, banging on the huge bronze doors to the chamber, and seeming to claw at them in a fruitless attempt to pry them open.

But Trump isn’t letting it go at that.  As Washington Examiner notes, Trump didn’t do this for Neil Gorsuch.

Trump did not give the same treatment to Justice Neil Gorsuch, whose confirmation process was far less controversial. The president swore Gorsuch in at an 11 a.m. ceremony in the Rose Garden.

But Trump will swear in Kavanaugh in prime time.

In front of a room full of reporters, television cameras and Republican lawmakers at 7:00 p.m. Monday, the president will stand next to Kavanaugh and present him to the nation as one of the crowning achievements of his first two years in office.

The Examiner is calling this a “victory lap,” which is no doubt how everyone in Washington sees it.  That’s understandable, given that it is a major political victory, and it involves Trump making special preparations and appearing in the event himself, as, well, the winner.

I leave it to readers to decide whether such victory laps are advisable as a matter of personal deportment.  As a matter of political deportment, and especially in this case, the cue for a victory lap is merely rather obvious.  Trump made a tough victory possible by doing two things.  He stuck with his nominee instead of folding in the face of manufactured pressure, as we could have expected almost every Republican who has run for president in the last 30 years to do.

And he did something I don’t think any other Republican would have done: he publicly pointed out the decisive holes in Christine Blasey Ford’s story.  The holes don’t necessarily damage her credibility about whether there was an assault against her. But they make it impossible to prove, and impossible for fair-minded people to accept as given, that the assault involved Kavanaugh.  (Nor could a pile-on stream of innuendo, no specific aspect of which was corroborated, generate a picture for fair-minded people of a vicious character pattern in Kavanaugh.)

Other commentators have spoken already of the importance of what Trump did, but I was cued to a segment from the indispensable Rush Limbaugh’s show Monday morning in which he made what I consider the most significant observation on the topic.  Emphasis added:

In the hearings, Christine Ford’s assertions were not challenged. So in the broad-based media coverage of the hearings, the fallacies and the unprovable allegations in her testimony were never brought up. So the average Joe Blow out there never knew that she couldn’t identify where with it happened, when it happened, how she got home, who took her home, what happened afterwards. She couldn’t even identify the year or the month.

They didn’t know this.

Limbaugh is right.  The mainstream media hadn’t let that reality come through their filter.  The significance of what Trump did lies in the fact that, when he highlighted Ford’s statements for their inconsistency and unfilled holes, the media had to cover that issue.

The media of course circled the wagons and berated Trump for pointing out the flaws in Ford’s statements.  But merely doing that required them to report what Trump had said at his rally.  And as Limbaugh emphasizes, it was Trump who forced them to do that, by “going there.”

In fact, he achieved a dual purpose with his comments at the rally, not only forcing the MSM to cover the legitimate problems with Ford’s story as an implication against Kavanaugh, but neutralizing the aura of taboo around bringing them up.

As I type, the ceremony is underway in a very crowded East Room.  It looks like most of the Senate Republicans are there, along with some of the leaders from the House.  Trump is acknowledging the work of Mitch McConnell and Chuck Grassley, the other senators of the Judiciary Committee, and Susan Collins, for her floor speech on Friday.

There will be all kinds of commentary, no doubt, questioning the choice to acknowledge Kavanaugh’s confirmation as a major political victory.  But this isn’t about the Supreme Court, per se — or it is only to the extent that the Left sees the Supreme Court, and the courts in general, as an unelected path to the political transformation of America.

The “problem” with Kavanaugh is precisely that he won’t render judgments in those terms.  He doesn’t see the Constitution as a document that means whatever you feel like in the moment.  He has a constitutionalist judicial philosophy, and that’s why Trump nominated  him.  It isn’t “politicizing the courts” improperly, for Republicans to prefer one judicial philosophy when Democrats prefer another one.  It’s the way government and politics work.  And in reality, the constitutionalist philosophy generally preferred by Republicans results in judicial rulings that are less swayed by the politics of the moment than what we get from the Democrats’ preference for judicial activism.

Plenty of pundits will make the point that Trump is touting a big victory because the midterms are coming up in a month.  That is no doubt a motive for the evening ceremony.

But to the extent that Trump is parading his victory, “in the face” of the nomination’s opponents, if you will, what my eyes see is in large part the gesture of giving Brett Kavanaugh and his family a formal and public vindication.  Trump isn’t going to leave this as a painful episode from which the contestants staggered off, bloodied, to their corners.  He’s giving the Kavanaughs a moment of celebration for Justice Kavanaugh’s accomplishment, and not just the memory of a swearing-in behind doors with a mob howling outside.

The sentiments of most Americans are not with the angry, incoherent mob.  I’m not sure the organizers of the Left understand how it resonates with ordinary people, to see that with Trump victories, the individuals who bore the brunt of the battle are cared for, and accorded healing and vindication in the end.  Whatever you think of Trump, he and the Senate Republicans handled every step of this by due process of law, and the outcome is legitimate.  Trump has now done a kindness for his nominee and the nominee’s family.

For Christine Blasey Ford, there were only weeks of being exploited by handlers who were more interested in using her politically than even in preparing her to testify more credibly, which perhaps they could have done.  Prosecution teams do it all the time, helping assault victims tell their stories consistently.  I have never to this day drawn a firm conclusion about whether Dr. Ford was assaulted. But assuming she was, there has been no credible evidence at all that Brett Kavanaugh was involved, nor was anything left undone by the Senate, in 2018, that might have established that.

The most important victory Trump commemorated this evening was the victory over an attempt to make character assassination a go-to model for our political decisions.  In those terms, it is indeed a victory worth celebrating, formally and with ceremony.  It isn’t a matter of little moment, whether we do our political business through character assassination.  Choosing against it diverts us very meaningfully from the road to national destruction.  The “victory lap” this evening was appropriate, for that reason alone. 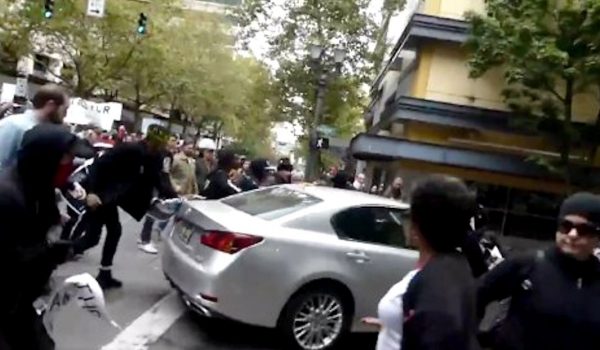