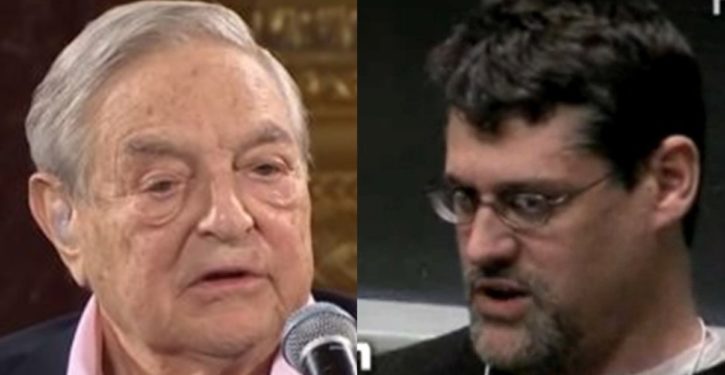 George Soros has indirectly funded Fusion GPS, the opposition research firm behind the infamous Steele dossier, a spokesman for the billionaire financier has acknowledged.

That organization, which was formed in 2017 by Daniel Jones, a former Senate Intelligence Committee staffer for Democratic Sen. Dianne Feinstein of California, paid Fusion GPS as a contractor to continue an investigation into Russian interference in the 2016 presidential election.

The Post column confirms what a Washington, D.C., lawyer named Adam Waldman told The Daily Caller News Foundation about a conversation he had with Jones in March 2017.

Waldman was an attorney for Russian oligarch Oleg Deripaska. He also worked in some capacity for Christopher Steele, according to text messages he exchanged with Virginia Sen. Mark Warner, the top Democrat on the Senate Intelligence panel.

In what the Post’s Ignatius noted was an “incestuous” relationship, Steele, a former MI6 officer, has done work for the Kremlin-linked Deripaska in the past.

Waldman told TheDCNF that Jones approached him on March 15, 2017 through text message asking to meet.

“Dan Jones here from the Democracy Integrity Project. Chris wanted us to connect,” he wrote, seemingly referring to Steele. At a meeting two days later, Waldman said that Jones told him that he was working with Steele and Fusion GPS and that their project was being funded by Soros and a group of Silicon Valley billionaires. (RELATED: Lawyer Claims Soros Funded Fusion GPS)

Jones told the FBI in interviews in March 2017 that his organization was paid around $50 million by a group of billionaires to conduct the investigation.

Jones’ statements to the FBI were first revealed in a report released by Republican members of the House Permanent Select Committee on Intelligence on April 27.

“[Redacted] told FBI that PQG was being funded by 7 to 10 wealthy donors located primarily in New York and California, who provided approximately $50 million,” the report continues. “[Redacted] further stated that PQG had secured the services of Steele, his associate [redacted], and Fusion GPS to continue exposing Russian interference in the 2016 U.S. Presidential election.”

Jones said that he “planned to share the information he obtained with policymakers … and with the press.” He also offered to provide all materials to the FBI.

It is unclear what information Jones & Co. have provided to the media. But he did send text messages to Waldman linking to news articles that he claimed his team was behind.

“Our team helped with this,” he wrote, linking to a March 17, 2017 Reuters article about Russians investing in Trump property in Florida.

Jones also sent Waldman a link to a March 20, 2017 article at McClatchy, which reported that federal investigators were looking into whether right-wing news sites like Breitbart and Infowars played a part in Russia’s election-oriented cyber operations.

The article cited “two sources familiar” with the matter. The same McClatchy reporters, Greg Gordon and Peter Stone, relied on the same sourcing for other controversial stories about the Russia probe, including one report that special counsel Robert Mueller has evidence that former Trump attorney Michael Cohen traveled to Prague during the campaign, as alleged in the Steele dossier.

The same reporters also wrote a story on March 15 alleging that conservative lawyer Cleta Mitchell expressed concerns about Russian funding of the National Rifle Association. Mitchell vehemently denied the report, noting that she was not an NRA lawyer during the campaign season, as McClatchy reported.

It has since been revealed that Glenn Simpson, the founder of Fusion GPS, provided similar information about Mitchell to Bruce Ohr, a Department of Justice official who served as a back channel between Steele and the FBI. Ohr’s wife, Nellie Ohr, worked for Fusion GPS on the anti-Trump project.

Vachon, the Soros spokesman, did not respond to TheDCNF’s request for comment.