The true number of illegal aliens living in the U.S. — long a subject of intense debate — could be twice as high as commonly accepted figures, according to a study by a Massachusetts Institute of Technology researcher.

The study published Friday by Mohammad Fazel-Zarandi, a senior lecturer at MIT’s Sloan School of Management, estimates there are about 22.1 million illegal aliens in the U.S. today. Most frequently cited estimates put the number between 11 and 12 million.

Even the lower bound of the MIT study’s range, 16.7 million, is nearly 50% higher than the 11.3 million estimated by the Pew Research Center for 2016.

Such a wide discrepancy is explained by deficiencies in the methods researchers have used to arrive at previous estimates, according to Fazel-Zarandi and his co-authors, Edward Kaplan and Jonathan Feinstein of Yale University. In the past, researchers typically extrapolated the total number of illegal aliens from population surveys and legal immigration records.

Fazel-Zarandi and his colleagues used mathematical modeling based on “operational data” — border apprehensions, deportations, visa overstays, and demographic data — to arrive at their estimate. The approach eliminated the uncertainty found in methods that rely on surveys, which are a less reliable gauge of the illegal alien population, according to the researchers.

“It’s very likely that undocumented immigrants are more difficult to locate and survey than other foreign-born residents, and if contacted, they might be inclined to misreport their country of origin, citizenship, and number of household residents fearing the legal consequences of revealing their status,” Fazel-Zarandi in a news release. “Any of these circumstances would lead to underestimating the true number of unauthorized immigrants.”

The MIT study, which spans 1990 to 2016, also used newly available arrest data to estimate the number of illegal border crossings during that time period. It found the number of illegal aliens coming into the U.S. rose steadily throughout the 1990s, peaked around 2008, and has leveled off and stabilized since then. (RELATED: Illegal Immigration By Families Surges To Highest-Ever August Total)

If corroborated, the numbers reported in the MIT study could have major implications for immigration policy under the Trump administration, which has made a crackdown on illegal immigration a centerpiece of its agenda. President Donald Trump has repeatedly painted illegal immigration as threat to public safety and the economic well-being of American workers, while administration critics contend he is exaggerating the scope of the problem.

“Debates about the amount of resources to devote to this population and the relative benefits and disadvantages of alternative policies — including deportation, amnesty, and border control — depend greatly on having a correct estimate,” Fazel-Zarandi said. “The number sets the scale.”

Some immigration experts contend the MIT-Yale study’s estimates are the result of flawed methodology. The authors failed to account for circulatory migration patterns in the 1990s, overestimating the number of people who arrived in the U.S. illegally and remained in the country, according to the Migration Policy Institute.

“In this accounting method, any error in estimating border crossers or those who leave the country … gets compounded over time, leading their mistakes to snowball,” MPI wrote in a formal response published in the same academic journal that published the MIT-Yale study. “By the time they build their estimate of the unauthorized population in 2000, their number is far higher than could be validated by any other means.”

Shocker: Feinstein asks for another delay based on Avenatti ‘bombshell’
Next Post
Cartoon of the Day: That’s showbiz 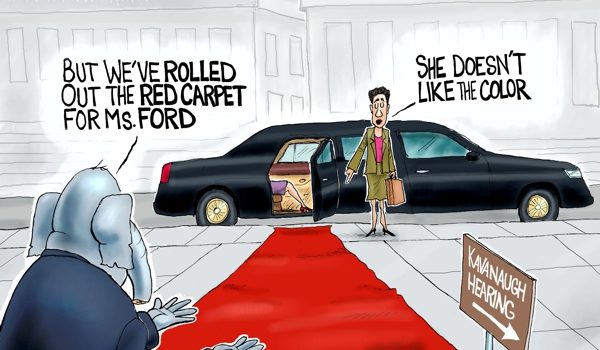