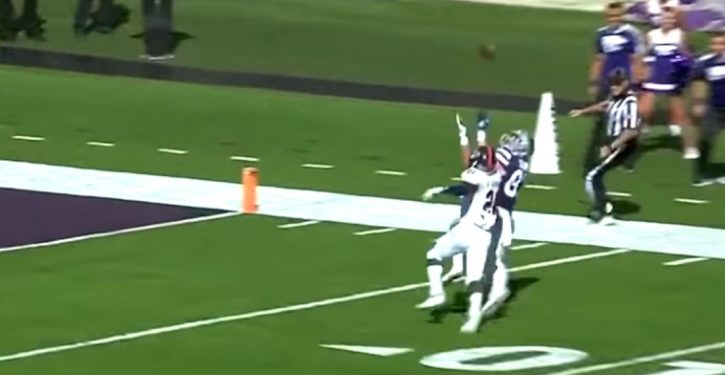 So far, we’re not hearing that Saturday’s all-important Army-Oklahoma game has been put at risk by the flooding around the state.  That’s good news, although fat lot of good it will do us for the game to be held as scheduled.  More on that below.

#10 Penn State is leading but not putting away Illinois as we watch Friday evening.  Central Florida is romping over Florida Atlantic.  Oh darn.

One mention for the self-immolating NFL, illustrating why we continue hoping for a resolution in which the league comes to its senses at some point.  Former Oklahoma QB Baker Mayfield, now with Cleveland, gave the Browns their first victory in 20 games (or, not that anyone was counting, 635 days) on Thursday night, stepping in for an injured Tyrod Taylor.  The Browns got past the Jets 21-17 – after the Mayfield-at-the-helm offense put all 21 points on the board in the second half.

That stuff’s just fun, unlike all the U-G-L-Y-ain’t-got-no-alibi business with Alice-in-Wonderland new rules and unlistenable sports announcers and politics.  Get unstuck from stupid, NFL.  This twisting in the wind of political meltdown just isn’t worth it.

The University of Tulsa, which beat Notre Dame 28-27 on 30 October 2010, put up another semi-respectable 31-17 loss at AAC opponent Temple Thursday night.  Considering the young Tulsa QB was wandering around trying to hand the ball over to any Temple player who would take it, the loss could have been a lot worse.  Bless his heart.  All five turnovers were by Mr. Skipper.  The defense stepped up and showed some gumption several times.  Need to work on the killer penalties.  Very young on both sides of the ball.

#5 Oklahoma hosts Army on Saturday evening, a game we would absolutely love to see.  But the communists aren’t showing it except on PPV.  Sooners give 31, but as always, we advise against complacency.  In this case, although Muleshoe Man (Coach Lincoln Riley) has the Sooners operating with a refreshing sense of urgency, you can also count on Army to outdo itself.  Covering isn’t out of the question for the Black Knights.

Sudden #15 Oklahoma State took a pole vault with the thumping win over Boise State, but will be tested again with a visit from Texas Tech.  The Red Raiders have their challenges this year, but always play the Oklahoma teams tough.  Moreover, TTU’s true freshman QB, Alan Bowman, hung 600 through the air on Houston last week, with five TD tosses in a 63-49 win.  Look for offensive fireworks in Stillwater.  Pokes give 14.

Navy heads to SMU for an AAC showdown in Dallas, where we are cautiously optimistic that, as with the Oklahoma games, no flooding will interfere with the festivities.  SMU, 0-3, hasn’t been completely terrible this year, but Navy gives 6.5.

Air Force is a 10-point dog heading to Utah State, which took a 7-point loss to Michigan State in week 1, but otherwise hasn’t had a big test this year.  This will be a real test for the Falcons too, who throttled Stonybrook but came up short against FAU two weeks ago.  Night game in Logan; Air Force needs to prove its sparky but inconsistent D can keep up with a fast and furious Mountain West offense.

#13 Virginia Tech will be at Old Dominion Saturday for a match that feels as wildly overmatched as it is.  We’ve seen Ballard Stadium in Norfolk, and they’re not fooling us; even half-a-Hokie crowd will have to spill over into the next county, and that’s just for the parking.  Tech is giving 27.5, and much as we love the Monarchs, we say let ‘er rip.

Nevada and Toledo found each other again in 2017 after a 20-year hiatus, and will continue their renewed series on Saturday in the Glass Bowl.  Both teams are rebuilding after some big player losses, but we tend to agree with the oddsquad that Toledo has the edge in this one.  The Rockets give 10; we’re gratified to see the game should be on CBSSN.  A rare Inner Circle two-fer.

New #6 LSU pulled off a Tiger Bowl classic last week with the late-surging, cardiac-arresting 22-21 knockoff of Auburn, and isn’t likely to lose ground on Saturday hosting Louisiana Tech (motto: “That traumatic WAC thing is so far behind us, we don’t even remember how to get to the airport, much less San Jose”).  LSU is donating 20 at the gate; we’re a tad leery of the points.

Kansas State heads to #12 West Virginia, pride of the Big 12, on Saturday, and if it were anyone other than Bill Snyder, the Mountaineers would be giving more than 16.5.  It’s a big game for both teams, the first salvo of the season for each in the Big 12, and against a perennial upper-half opponent.

#17 TCU will be at Texas to kick off Big 12 play and renew their Storied Rivalry.  In spite of the Frog loss to Ohio State last week, TCU is likely to more than cover the 3-point give to the ‘Horns (who are coming off a win over USC, granted, but that doesn’t carry the luster it did a few years ago).  TCU has won the last four meetings with Texas; we regret to report that no kitchenware changes hands in this 120-year-old rivalry series.

It took some last-minute heroics, but Wyoming edged past Wofford last week 17-14 to go 2-2 on the season.  (The Pokes played in week 0.5, remember.)  They’re off this week preparing to meet Boise State on the 29th.

#3 Clemson gives 16 at Georgia Tech as ACC play gets underway.  #4 Ohio State hosts Tulane, presumably because they just can’t help themselves, with a give of 37.

New #7 Stanford heads to #20 Oregon, giving a stingy 2.5 in the marquee game Saturday evening.  We say the Candy Pink bettors are yellow.

#8 Notre Dame gives 6.5 at Wake Forest, kicking off at noon.

New #9 Auburn hosts Arkansas for a night game, with the Hogs a 29.5-point underporker.

We won’t talk about Wisconsin.  Well, except that they’ll be at Iowa for their Storied Rivalry, playing for the Heartland Trophy and giving 3.

Which brings us to…

You can’t beat the Storied Florida-Tennessee Rivalry, which is at Tennessee this year, with the Gators giving 4.  We think that’s a bit optimistic for Florida, but we’re willing to be proven wrong.

And any weekend #24 Michigan State and Indiana are playing for the Old Brass Spittoon is all right by us.  That Storied Rivalry unfolds in Bloomington Saturday evening, and as always, we salute both teams for fighting over one of the better class of household service receptacles in their quest for athletic notoriety.  Spartans give 6.

Rounding out Storied Rivalry action, New Mexico State will be at UTEP to thrash it out for the Silver Spade in the Battle of I-10.  Sadly, no points on offer for this one.

Digging a little deeper, you would think Kent State and Ole Miss might have played before now, but no.  The Golden Flashes will be in Oxford on Saturday, where the Rebels are giving 29.

We’re wary of suggesting that you tune in to Nebraska at #19 Michigan.  But hey, how bad could it be, right?  We’ve got one of those situations you could build a cult around, if somebody’s paying attention.  Blue is giving 18.5, and the funny thing is, that may be optimistic.  Big 10 fans, go wild.

For a palate cleanser, Duquesne (FCS, Northeast) heads to Hawaii Saturday night.  We think the Dukes just wanted a few days on Oahu.

In FCS, McNeese State will be off on a wild toot Saturday, crashing Provo for a chance to play #25 BYU.  What are the odds, right?  McNeese knocked off FCS #12 Nicholls State last week, and is currently at #10 in the FCS Coaches Poll.  Not that that gives them a shot at BYU, where we assume Cougar fans won’t soon stop talking about knocking off Wisconsin.  But in terms of nervy excitement, it’s got to be a high-water mark for the Lake Charles Pokes in 2018.  4 PM kickoff with sun and 80s.

In Div II, Slippery Rock is back on track at 2-1 after a 57-10 romp over Millersville.  They’re hosting Seton Hill for a PSAC bout on Saturday.   Cloudy and in the 50s for the 6 PM kickoff.

UCO prevailed at Lindenwood, 52-42, to surge to 1-2.  They’ll be hosting MIAA foe Northwest Missouri on Saturday, the Bearcats coming in 3-0, currently ranked #2, and one of the perennial Div II tournament contenders in the region.  So…you know.

A fact we would not dream of omitting here is that the early years of Northwest Missouri campus life were enlivened by a mascot known as Mike the dog.  Sadly, however, Mike perished in a most unfortunate incident in 1917:

Mike ([resembling] a Cairn Terrier) was a campus fixture from 1916–1917 and wore a green blanket with an “M” on it. Mike died after drinking arsenide of lead mistaking it for water. Students raised money for the memorial.

The 6 PM kickoff in waterlogged Edmond is looking at upper 60s, but no precipitation.

In Div III, Rose-Hulman’s not having their best season start, now at 0-3 after a painful loss to archrival Mt. St. Joe last week.  RHIT hosts 1-2 Manchester in Terre Haute on Saturday, and has a fair shot at getting their first win.  7 PM game start; 60-ish and overcast, dropping into the 50s as the evening wears on.

Christopher Newport’s game from last week was postponed due to Hurricane Florence, but they’re back on track hosting Montclair State (NJ) for an NJAC contest Saturday afternoon.  Both teams come in 2-0.  Montclair State is a tough competitor; this one won’t be a gimme.  1 PM game start; 80s and humid in Pomoco.

It’s homecoming weekend in Kings Point for Merchant Marine, 2-0 and hosting Maine Maritime Saturday at 1 PM.  Maine Maritime may be coming in 0-2, but they have one of the best campus complexes in the nation, plus their own seagoing schooner, the Bowdoin.  For those who prefer more modern amenities, the school also operates the Training Ship State of Maine.

The clash of Mariners on Saturday will see a high of about 70 and cloud cover.

Is the unhinged opposition to Kavanaugh only about abortion law? Why 2016 election links provide a clue
Next Post
CNN: Cory Booker’s groping incident different from allegations against Brett Kavanaugh